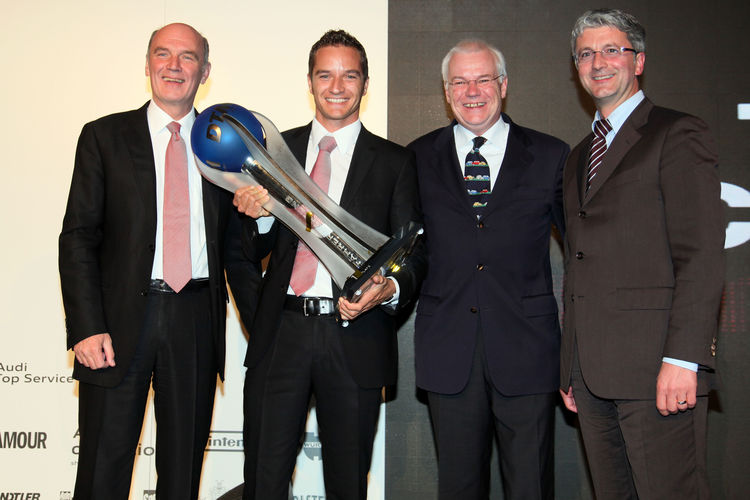 It was Audi’s third title win in a row. A title hat-trick has never before been achieved by an automobile manufacturer in the DTM which has been held since 1984.

Timo Scheider successfully defended his title from last year. Only one driver before him has achieved this feat (Bernd Schneider in 2000/2001).

Once across the country at racing speed? On the way to the title Timo Scheider covered exactly 1,796.720 kilometers during the course of 548 race laps in the 2009 season. This equates almost exactly to the distance between his home in Lochau, Austria, on Lake Constance to Kiel on the North Sea coast and back.

Timo Scheider was thus the only driver in the 2009 season to finish all 548 race laps. The champion scored points at each of the ten races but was retroactively disclassified at Zandvoort because he showed up late for weighing. At seven of the ten rounds Scheider was on the podium.

Timo Scheider also posted the largest number of leading laps of the year (140), followed by Mattias Ekström (103). Ekström was leading for at least one lap at nine of the ten races.

Oliver Jarvis and Katherine Legge both managed “premiere” showings: Jarvis clinched the first pole position of a year-old car at Zandvoort. Legge was the first woman in the “new” DTM held since 2000 to manage a fastest race lap, at the Norisring. In addition, by clinching fifth place on the grid, she achieved the best ever qualifying result of a female driver in the “new” DTM.

In qualifying, the Audi A4 DTM was in a class by itself in the 2009 season: Eight out of ten possible pole positions went to Audi. Six times an Audi driver posted the fastest race lap. Audi scored 200 out of 390 possible points and led 325 of the total of 548 laps.

Four single wins were celebrated by Audi in the DTM season that just ended, and each time they were particularly dominant ones: At the Hockenheim season opener and at the Nürburgring, the brand achieved one-two-three-four wins, at Oschersleben and Barcelona one-two-three exploits.

In terms of the individual vehicle models, the track record of exploits looks as follows: 19 times the Audi V8 quattro (1990 to 1992) triumphed, eight wins went to the Abt-Audi TT-R privately fielded by Team Abt Sportsline (2000 to 2003) and 25 victories have so far been achieved by the Audi A4 DTM since 2004.

On average, Audi models won a total of 52 out of 166 races and thus 31.32 percent of all runs. Hence almost every third winner’s trophy went to an Audi team.

With two titles and 13 wins under his belt, Mattias Ekström is the most successful Audi DTM driver.

The most successful DTM team in Audi’s history is the squad of Hans-Jürgen Abt: 33 of the 52 victories belong to the team from the Allgäu which has been active in the DTM since 2000. Twelve exploits were clinched by the SMS and seven by the AZR team.

The track record is particularly impressive for the youngest vehicle generation, the current-specification Audi A4 DTM which is internally designated as the “R14.” In 2008, the R14 was on the pole position at eight races, in the 2009 season the R14 plus evolution version equaled this number. With 16 out of 21 possible pole positions, the two versions of the R14 have thus achieved a share of 76.19 percent of all pole positions in the past two years.