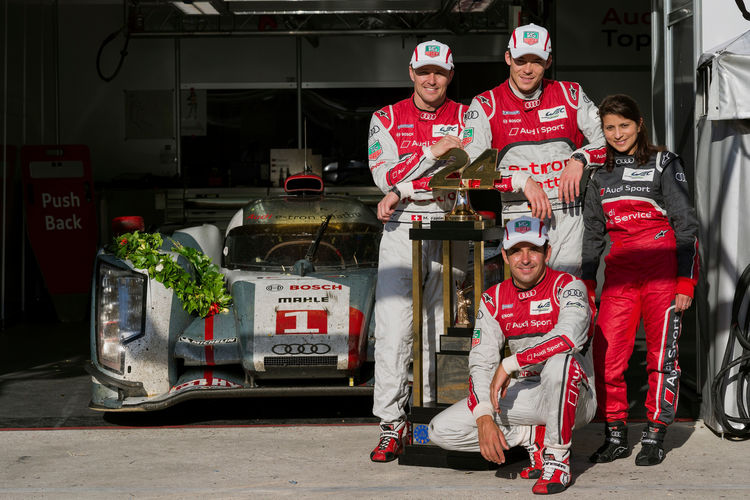 Audi has led advanced technologies to victory at Le Mans yet again. Key facts after the 80th running of the 24-hour race.

Eleven times in front: Audi made its Le Mans debut in 1999 and has now won the 24-hour race for the eleventh time since 2000. No other manufacturer has clinched as many victories at La Sarthe in such a short period of time.

Rate increase: Audi has won eleven times in 14 attempts. Only Porsche, the sister brand in the Volkswagen Group, has scored more overall victories – 16 wins from 62 races. This calculates to a unique winning rate of 78.57 percent for Audi.

Team performance: The team of Reinhold Joest experienced its 13th victory at La Sarthe and ninth with Audi. The squad’s personnel were involved in two other successes as well – in 1994 at Dauer Racing with Porsche and in 2003 in an instrumental role with Bentley.

Brief interruption: The safety cars took command of the field at Le Mans only three times. The 24-hour race was neutralized for a total of 2hr 22mins. Last year, with 4hrs 46mins, this period was more than twice as long.

Endurance test: Only 33 of the 56 entrants that started the race finished were classified at the end. This equates to a retirement rate of 41 percent. Audi’s retirement rate was 0 percent – all four vehicles saw the finish line.

Suspense galore: The lead changed 19 times at the Le Mans 24 Hours. In 18 cases, an Audi driver was in front whereas newcomer Toyota, the race leader on laps 83 to 85, immediately showed its potential. On 326 out of 378 laps, the subsequent winning vehicle led the field. During the final 79 laps alone the lead changed eight times.

One-two-three-four result: Audi occupied the top four spots in the Michelin Green X Challenge. The prize for the most efficient drive was won by Dindo Capello/Tom Kristensen/Allan McNish ahead of Marco Bonanomi/Oliver Jarvis/Mike Rockenfeller. Third place went to Marcel Fässler/André Lotterer/Benoît Tréluyer ahead of Romain Dumas/Loïc Duval/Marc Gené. In 2007, Audi won this prize for the first time. At that time, Frank Biela/Emanuele Pirro/Marco Werner in the Audi R10 TDI were the quickest team with the lowest consumption.

Number 29: Audi’s success marked the 29th victory of a German automobile manufacturer at the endurance race held by the French neighbor. In addition, it was the 29th success of a race car with a closed body and the 29th triumph of a turbocharged engine.

Number 2: In the all-time list of podium places Audi improved by one position to second place after scoring its most recent one-two-three result. With 27 podium finishes achieved to date, Audi has now overtaken the previous runner-up, Ferrari. In the pole position standings, Audi managed a step forward too. André Lotterer set the seventh best time in qualifying by Audi at the Le Mans 24 Hours. In 2000, 2001, 2002, 2004, 2006 and 2011, the brand had started the race from the top spot on the grid as well. Audi has outperformed Peugeot on the all-time list of pole setters and is now the only runner-up.

Number 1: With the R18 e-tron quattro, Audi achieved the first victory with all-wheel drive at Le Mans. 1986 was the first year to see a race car by another manufacturer with four driven wheels at La Sarthe. Yet only the name of quattro is associated with the pioneering feat of clinching overall victory – as before in 1981 in rally racing, in 1988 in the TRANS-AM series, in 1989 in the IMSA-GTO series, in 1990 in the DTM and in 1993 in Super Touring Car racing.

Pride of their nations: Benoît Tréluyer recorded the 40th victory of a Frenchman at the classic event, André Lotterer the 28th one for Germany and Marcel Fässler the second one for Switzerland. He is the only Swiss to have won the race to date. The number of drivers on the all-time winners’ list has remained unchanged this year: 125 different racers have won the Le Mans 24 Hours so far.

Successful with Audi: Marcel Fässler/André Lotterer/Benoît Tréluyer have been driving for the Audi factory team at Le Mans since 2010. At these three events at La Sarthe, they recorded a second place and two victories.

Small club: Only 18 of the 125 winners achieved one or several additional victories after their debut successes. The triumph by Marcel Fässler/André Lotterer/Benoît Tréluyer has raised this number to 21.

Extension of lead: Tom Kristensen with a track record of eight victories is leading the all-time winners’ list at Le Mans. By having finished as the runner-up, the Dane raised his number of podium results to twelve. With that, he owns two more trophies than Jacky Ickx and Dindo Capello. Kristensen was on podium at each of his finishes – either in first or in third place. Now he finished in second place for the first time.

Change of lead: After taking second place, Dindo Capello/Allan McNish/Tom Kristensen are again ranking at the top of the FIA World Endurance Championship (WEC) standings. They have so far scored 77 points while the Le Mans winners, Marcel Fässler/André Lotterer/Benoît Tréluyer, are following them with a 6.5 gap.

Front runner: The number “1” Audi R18 e-tron quattro driven by Marcel Fässler/André Lotterer/Benoît Tréluyer was at the very front in qualifying and won the race as well. Before, since qualifying was introduced in 1963, the first car on the grid was only the first car to finish on seven occasions.

Fastest race lap: Loïc Duval in the number “3” Audi R18 ultra posted the fastest race lap of 3m 24.189s. The Frenchman had previously been the top performer in this discipline in 2010. The current lap was 1.1 seconds faster than last year’s.

Debut: For the first time, André Lotterer set the best time in qualifying at Le Mans. In the 2012 FIA WEC season, this marks his second pole position after settng the quickest qualifying lap at the Sebring 12 Hours.

Rolling wave of success: Michelin, Audi’s tire partner, celebrated its 21st Le Mans success. For the French manufacturer, this marked the 15th consecutive win and the eleventh one as Audi’s partner.