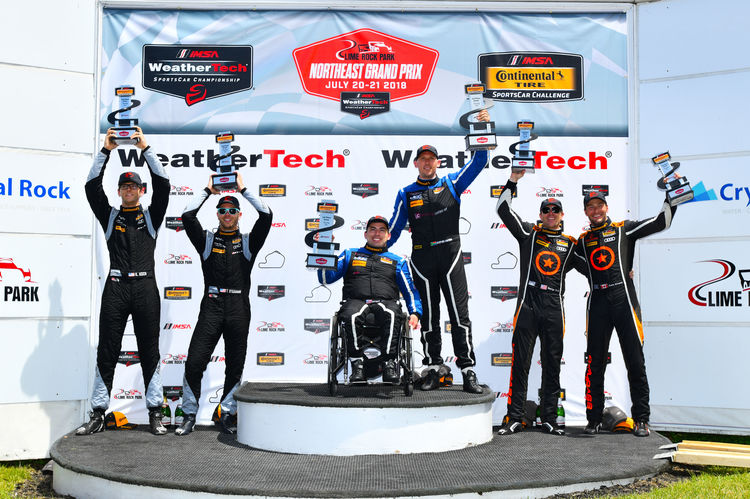 Paralyzed Audi privateer driver achieves first touring car victory: Michael Johnson and Stephen Simpson celebrated their first TCR victory in the IMSA Continental Tire SportsCar Challenge season at Lime Rock. In a photo finish after two hours of racing, Simpson in an Audi RS 3 LMS prevailed against Kenton Koch and his teammate, Tom O’Gorman, from Team eEuroparts.com Racing with an advantage of 66 thousandths of a second. Five Audi RS 3 LMS cars finished in the top five. Michael Johnson from Team JDC-Miller MotorSports has been paralyzed from the waist down since a motorcycle accident at age 12 and now has clinched his first victory in car racing. “I have been thinking about this win since my accident,” said 25-year-old Johnson. Third place went to Rodrigo Sales/Kuno Wittmer from Team Compass Racing that has been dominating the season to date. With four races remaining, the situation in the standings is extremely exciting: Sales/Wittmer as runners-up in the standings have only a one-point deficit to their teammates, Britt Casey Jr/Tom Long, who are leading the TCR classification in an Audi RS 3 LMS.

Audi driver maintains lead of the standings: Dmitry Bragin, after four of seven events, remains the leader of the TCR Russia standings. The privateer from Team Taif Motorsport clinched two second places at the Kazanring. In race one, he saw the checkered flag only 0.179 seconds behind Aleksej Dudukalo who in an Audi RS 3 LMS of Lukoil Racing celebrated his first win this season. In round two, last year’s champion Bragin was only 0.679 seconds short of clinching first place.

Second class win in succession: The Audi RS 3 LMS has continued its string of success in Brazil. In round three of the Endurance Brasil racing series, Henry Visconde/Marcio Basso celebrated their second consecutive class win at Tarumã. After three hours of racing, they had a two-lap advantage over their closest rival.

One podium in Italy: Riccardo Ruberti in an Audi RS 3 LMS clinched a trophy in the Coppa Italia Turismo. The Italian achieved a third place in the TCR class in round six of the racing series on the circuit at Varano.

Third victory this season for Phoenix Racing: The German Team Phoenix Racing in the GT4 European Series celebrated its third victory this season on the circuit at Spa. Like in the season opener at Zolder and round two at Brands Hatch, the Dutchman Milan Dontje and the Dane Nicolaj Møller Madsen won the first of two races at the event in an Audi R8 LMS GT4. Gentle handling of the tires was one of the keys to success. As a result, Møller Madsen who took the car over from Dontje about halfway through the race was able to improve from fifth place to position one. With two events yet to be held, the two drivers are runners-up in the standings.

Next podium success for Magnus Racing: Only two weeks following third place at Mosport, the Audi customer team Magnus Racing in round seven of the IMSA WeatherTech SportsCar Championship improved once again. On the winding track at Lime Rock, team principal and driver John Potter together with Andy Lally in an Audi R8 LMS took second place.

String of victories in Australian club sport: Ryan How won all three rounds on the fourth race weekend of the Victorian State Circuit Racing Championships in Australia. The privateer was competing in an Audi R8 LMS of Team Ren Racing on the circuit at Sandown.