Skip to content
We are using cookies for a better user experience.
09/23/19
Neuburg a. d. Donau
Sports

Links
{{ activeItem() }}
Twitter
06/01/20
It was time again for our six @DTM drivers to pick a winner for the next @rccoracehome event. Congratulations to… https://t.co/Ymt6BoDhAg
05/31/20
That was the season finale of the #DTMesports Classic Challenge on the @Nuerburgring Nordschleife. Thank you for fo… https://t.co/ACSJaQiQOY
05/31/20
Our reigning @DTM champion @ReneRastRacing is live right now. Join him on Twitch: &gt;&gt; https://t.co/ni87YOnzSk… https://t.co/msJFYH57Zv
05/31/20
Here we go for the @DTM eSports Classic Challenge season finale at the @Nuerburgring Nordschleife, from 14:00 CEST.… https://t.co/prgBtMIaU2
Audi Sport on Twitter
{{ activeItem() }}
Facebook
05/31/20
Season finale: The DTM eSports Classic Challenge is taking place on the Nürburgring Nordschleife today, including the 1992 and 2016 seasons with the Audi V8 quattro DTM and Audi RS 5 DTM. Live from 14:00 CEST. Live stream >> bit.ly/2XgZin5 #PerformanceIsAnAttitude #DTMesports #RaceAtHome #AudiTogether
05/27/20
Daniel Abt, after six years and 63 races, will no longer drive for Audi in Formula E. He has been part of our Formula E team since the debut of the racing series in September 2014, and our official factory driver since the autumn of 2017. In Mexico and at our home round in Berlin, Abt took two fantastic Formula E victories and scored a total of ten podium results. With Daniel, we celebrated great success and made enormous strides with Formula E. We are thankful for our time together and look back on it proudly. However, integrity, transparency and consistent compliance with applicable rules, especially with regards to the past, are top priorities for us at Audi. We stand by our culture of tolerating mistakes. However, the incidents that took place during the “Race at Home Challenge” sim racing series were not a mistake, but a conscious decision to go against the rules. That is what makes the big difference for us. Therefore, unfortunately, we had no other alternative than suspending Daniel Abt. >> audi.com/FormulaE #ABBFormulaE #SimRacing
05/26/20
It’s that time again: the #RaceHome charity racing series. Our DTM drivers are at Brands Hatch this week for more action with the Audi e-tron Vision Gran Turismo. #RaceHome #AudiTogether #etron #StayHome #PerformanceIsAnAttitude #RaceAtHome
05/25/20
Two victories in the virtual racing world of #RaceHome, the first taste of track action and some family time for Nico Mueller. That and more in his latest #DriversDiary. >> audi.com/DTM #RaceHome #AudiTogether #etron #StayHome #PerformanceIsAnAttitude #RaceAtHome
Audi Sport on Facebook 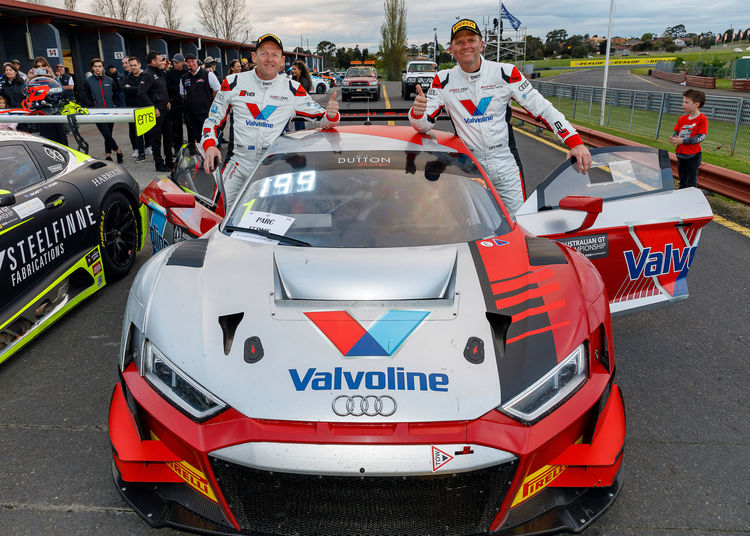 On the circuit at Sandown in Australia, Geoff Emery and Garth Tander in an Audi R8 LMS won the Australian Endurance Championship on the weekend. In addition, Audi Sport customer racing clinched trophies in France, Italy, New Zealand and Spain with its teams.

Title success in Australia: Geoff Emery and Garth Tander won the Australian Endurance Championship on the circuit at Sandown. Following their victory in the season opener on Phillip Island and a runner-up finish at Bend Motorsport Park, the two Australians again only needed a second place in the Audi R8 LMS to decide the classification with Team Valvoline in their favor. Emery had previously won the overall classification in the racing series in 2017 and 2018 and now the endurance classification for the first time. For the professional race driver and former V8 Supercars Champion Garth Tander, this marks his first title with Audi. In the overall classification of the Australian GT Championship, which also includes the three endurance races, two events are still on the calendar until November. Emery has perfect chances of winning this title for the third time in succession. In total, Audi has won the overall title four times, the Trophy classification five times and now the Endurance classification for the first time on the fifth continent.

One-two result in New Zealand: The 2019 season in the South Island Endurance Series in New Zealand kicked off with a one-two result clinched by Audi Sport customers. Neil Foster/Jonny Reid in an Audi R8 LMS of the IMS team won the three-hour race at Teretonga with a 44.2-second advantage. Second position went to the Track Tec Racing team. At its first event with the Audi R8 LMS, it was on the grid with the driver trio of Dale Chapman/Marc Doran/Andrew Waite.

Drivers and teams confirmed for Macau: Audi Sport customer racing together with its customer teams will be racing with a total of four R8 LMS cars in the 2019 FIA GT World Cup from November 14 to 17. Audi Sport Team Rutronik is aiming to win the prestigious GT3 race in Downtown Macau with the South African Kelvin van der Linde. This team-driver combination recently won the ADAC GT Masters. Audi Sport Team WRT, which in 2016 scored Audi’s fourth GT victory in Macau, relies on Dries Vanthoor. The Belgian was previously successful with Audi this year in the Nürburgring 24 Hours and the Suzuka 10 Hours. Team Phoenix Racing, which won the Guia Race of Macau with Audi exactly 20 years ago, will enter the race with the German Christopher Haase. In addition to the three Audi Sport drivers, a privateer will be on the grid as well. Chen Weian from China, who in 2017 decided the Am-plus classification of the Audi Sport R8 LMS Cup in his favor, relies on an Audi R8 LMS from Audi Sport Asia Team TSRT.

Two trophies in home round: Baporo Motorsport in the home round of the GT Cup Open Europe racing series at Barcelona celebrated two podium successes with the Audi R8 LMS GT4. Daniel Díaz-Varela from Spain and Andorran Manel Cerqueda in the fifth event of the European series achieved third position in both races, which made them the second-best team in the AM classification, respectively.

Success at Vallelunga: In round six of the Coppa Italia Turismo at Vallelunga, Enrico Bettera in the first race won the TCR classification in an Audi RS 3 LMS with an 8.6-second advantage ahead of Jacopo Guidetti in another Audi. In the second race, Edoardo Barbolini crossed the finish line 1.2 seconds in front of Andrea Argenti – both relied on an Audi RS 3 LMS, too.

Class victory in France: In round six of the Trophée Tourisme Endurance, the Audi RS 3 LMS once again proved its endurance racing qualities. On the circuit at Nogaro, the Motorsport Développement team finished overall runners-up and scored victory in the T4 class. After 3h 50m of racing, the driver team of Mané Vignjevic/Pierre-Etienne Chaumat had achieved a 7.4-second advantage in its class.

Two second positions in Australia: In round six of the TCR Australia, the Audi RS 3 LMS claimed two podium finishes. In both the second and third race at Sandown, Garth Tander crossed the finish line closely behind winner Nestor Girolami from the FIA WTCR. In the second sprint race, Tander was separated from the Argentinian by 1.58 seconds and in the third one even by merely 0.46 seconds.

Two Audi drivers on podium: In round six of the TCR Europe at Barcelona, two Audi Sport customer teams were successful. In the first race, Santiago Urrutia with the WRT team achieved the fourth spot. Following a penalty for runner-up Josh Files, the up-and-coming driver from Uruguay in an Audi RS 3 LMS subsequently moved up to third position. In the second race, Comtoyou Racing clinched a trophy with the Audi RS 3 LMS. After twelve laps, the Belgian Gilles Magnus as the runner-up had to admit defeat by merely half a second. The event was not only part of the TCR Europe but also of the TCR Benelux. Before the Benelux finale at Monza, Magnus sits in the runner-up’s spot with a 23-point deficit while 85 points are yet to be awarded in Italy in three weeks’ time.

Successful debut in New Zealand: Team Track Tec Racing celebrated a good season opener in the South Island Endurance Series in New Zealand. In the first race of the Audi RS 3 LMS on the circuit at Teretonga on the South Island, Dennis and Debbie Chapman in the 60-minute category finished runners-up in Class B.

WTCR wild card entry by Audi Team Hitotsuyama: In round eight of the WTCR – FIA World Touring Car Cup in Japan from October 25 to 27, Audi Sport customer racing will welcome a local customer team to the field. Audi Team Hitotsuyama received two wild card entries for the race weekend at Suzuka. Ryuichiro Tomita is going to take the wheel of one of the two Audi RS 3 LMS cars. The 30-year-old Japanese has been driving an Audi R8 LMS of the team in the GT300 class of the Super GT racing series. In the fifth round of the Super Taikyu Series in September, he clinched third position in an Audi RS 3 LMS. “These race cars are clearly more powerful and a lot more fun than the front-wheel drive models I became familiar with at the beginning of my career. I’ve raced at Suzuka many times before and can hardly wait for my run in the FIA WTCR,” said Tomita. Ritomo Miyata will drive the second Audi RS 3 LMS. The 20-year-old up-and-coming Japanese driver has won the Formula 4 Championship in his country twice and is currently the runner-up in the Japanese Formula 3 Championship before the finale. “In a test, I came to know the Audi RS 3 LMS as a car that’s easy to drive and a lot of fun and that likes fast corners. I’m looking forward to the weekend at Suzuka,” said Miyata.