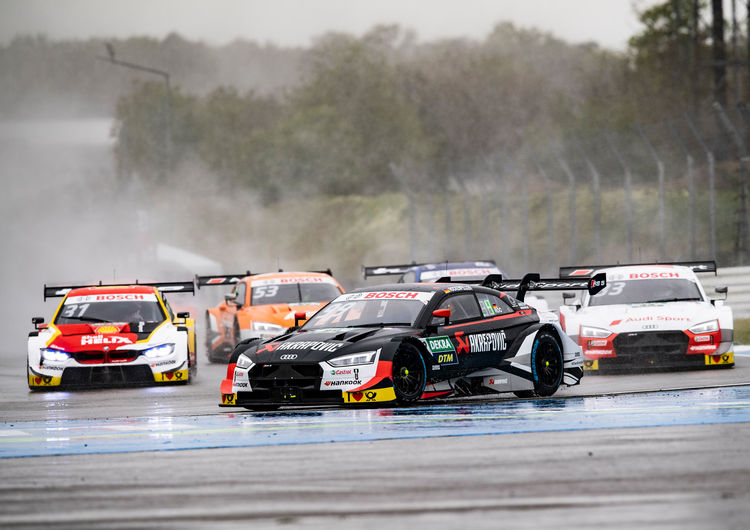 Best Audi team on Saturday, no points on Sunday: Audi Sport Team Phoenix experienced an emotional roller coaster in the DTM opener at the Hockenheimring.

On Saturday, Mike Rockenfeller and Loïc Duval in rain and cold came second and fifth in their two Audi RS 5 DTM cars and provided the team based in Meuspath with a total of 30 points. “Rocky” started from the front row alongside Marco Wittmann in a BMW after having missed pole position by just 66 thousandths of a second. In the race, he was struggling with his first set of tires. “Unlike in qualifying, I hardly had any grip,” says Rockenfeller. “I don’t know the reason. With the second set of tires, everything was okay again, but at that time, victory was already lost. Still, it was a good season opener.”

On Sunday, the sun was shining at Hockenheim, but not for the Phoenix squad. For both drivers of the team, the race ended near-simultaneously: Rockenfeller had to park his Audi RS 5 DTM due to oil loss and Duval slid into the gravel trap of the Sachs Corner while running in sixth position. “My wheels locked just very slightly,” says the Frenchman. “In any other section of the track, nothing would have happened. But in this turn we’re driving very close to the edge, so this was a small mistake with a big effect. I’m really sorry especially for the team because today a podium would have been possible.”

“It’s incredibly exciting when you don’t know how well you’ll be able to cope with the new technology and how competitive you are,” says Team Director Ernst Moser. “In the end, it was clear that all the work over the winter paid off and that we’re competitive both on Saturday in the rain and on Sunday on a dry track. As far as that goes, it was a positive weekend. On Saturday, we brought both cars home in good positions and on Sunday experienced exactly the opposite: on lap eight, everything was over and both cars were out of the race. Even so, it was good to see three Audi drivers on podium. It shows that if we get everything together we’re able to win this year. That puts me in a very positive mood.”