Skip to content
We are using cookies for a better user experience.
10/11/21
Neuburg a. d. Donau
Motorsport 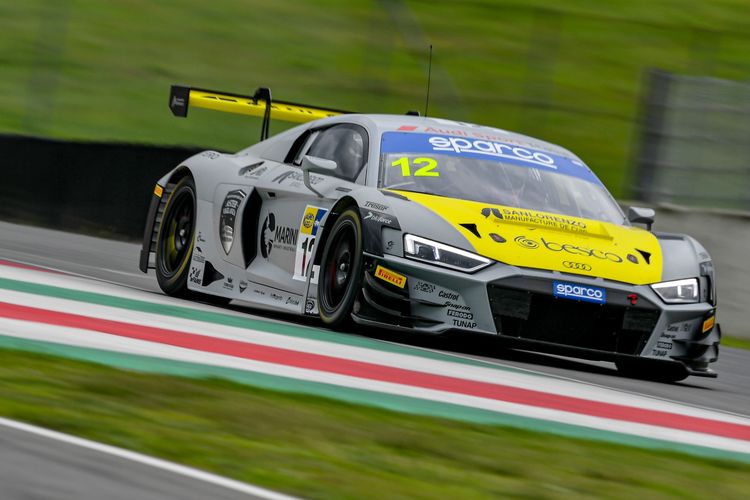 In the decisive phase of the 2021 season, Audi’s customer teams remain on course for success: The overall title in Italy, a fifth championship success in the Fanatec GT World Challenge Europe powered by AWS, class titles on the Nürburgring’s Nordschleife as well as overall and class titles for the Audi RS 3 LMS in touring car racing contribute to a strong tally. In the overall total since the start of the program in 2009, the number of all titles won by the Audi R8 LMS GT3 exceeded the 200 mark with a total of 86 drivers titles and 117 additional successes in other categories at the weekend.

Two championship wins in Italy: Audi Sport Italia had every reason to celebrate at the finale of the Campionato Italiano Gran Turismo Sprint. At Mugello, Riccardo Agostini won the sprint title for the second time in a row for the team of Emilio Radaelli and Ferdinando Geri and for the third time overall. Agostini’s teammate Lorenzo Ferrari was delighted with his first personal championship win. At the same time, the team classification went to the tradition-steeped Audi squad from Nibbiola for the third time after 2014 and 2015. Not only the Audi R8 LMS of Agostini/Ferrari but also Daniel Mancinelli/Vito Postiglione in the sister car had contributed to this. They had clinched their first win of the season in Saturday’s race at Mugello. Once again, the race track in Tuscany provided plenty of tension. In the decisive sprint on Sunday, championship contenders Riccardo Agostini/Lorenzo Ferrari were only virtual second in the title standings at the time of the pit stop. Lorenzo Ferrari kept a cool head in the closing stages and secured the title for himself and teammate Agostini with fifth place, while rival Alex Frassineti in the Lamborghini dropped back due to a puncture and lost the championship.

Fifth title success this season for Team WRT: In the Fanatec GT Wold Challenge Europe powered by AWS, Team WRT secured another title at the finale. Vincent Vosse’s successful squad crossed the finish line in third place after three hours of racing at Barcelona with Robin Frijns and Audi Sport drivers Dries Vanthoor and Charles Weerts in the Audi R8 LMS. Vanthoor managed the decisive overtaking maneuver towards the end of the race with which he and his teammates still finished on the podium. As a result, the Belgian squad won the team classification in the endurance cup with a one-point advantage, having previously won the drivers and team classification in both the sprint class and the overall classification comprising sprint and endurance races. Vanthoor/Weerts are third in the Endurance Drivers Championship, as is Alex Aka in Attempto Racing’s Audi R8 LMS in the Silver Cup classification and Team WRT second in the Silver Cup Team classification.

Titles for Audi customer teams on the Nordschleife: Phoenix Racing and Lionspeed by Car Collection Motorsport ended the 2021 season of the Nürburgring Endurance Series with major successes. After three and a half years on the Nordschleife, privateer driver Vincent Kolb managed his first personal overall victory together with Audi Sport driver Frank Stippler in a varied race. The duo in Phoenix Racing’s Audi R8 LMS won with an 18-second advantage after teams from Porsche and Lamborghini were set back by time penalties for overtaking under yellow flags. As a result, the SP9 Pro classification of the championship goes to the junior driver Vincent Kolb from Frankfurt. At the same time, Phoenix Racing won the Speed Trophy as well as the Nimex Team Trophy in the SP9 Pro class. Lionspeed by Car Collection Motorsport recorded a retirement in the race, but received the well-deserved reward for a good season in general with the title in the SP9 Pro-Am class. Patrick Kolb and Lorenzo Rocco had won their class four times this year in the Audi R8 LMS of Peter Schmidt’s team. They thus prevailed over seven competitors in the final standings. This proves once again that the R8 LMS is the first choice even for race drivers without a professional background on one of the world’s most demanding tracks.

Two successes in China: Jiang Jiawei experienced his best race weekend to date in the Chinese GT Super Sprint Challenge at Zhuzhou in the Audi R8 LMS with Team Absolute Racing. After an opponent had pushed him away in the first sprint and he had dropped back, he improved back to third place overall as the best GT Cup Am driver. The Audi privateer finished the second sprint in identical positions. In the Audi Sport Asia Trophy, Jiang Jiawei is now in second place.

Crowning finale: Grégory Guilvert and Fabien Michal managed a perfect end to the season in the GT4 European Series. The two Frenchmen, who have already won the Pro-Am class of the racing series early with Saintéloc Racing, celebrated their seventh victory of the season in the Pro-Am classification at Barcelona. The duo in the Audi R8 LMS GT4 won Saturday’s race by 4.1 seconds. On Sunday, Guilvert/Michal finished third overall in the field of 41 competitors. In addition to the Pro-Am titles in the drivers and team standings, the decision in the Am classification had already been made early, too. Michael Blanchemain/Christophe Hamon with Fullmotorsport in another Audi R8 LMS GT4 were already certain winners before the finale. The two Frenchmen clinched season wins number 5 and 6 in the Am class in the two races in Spain.

Three class wins in South Africa: Marius Jackson returned from the fifth race weekend of the G&H Transport Extreme Supercars race series in South Africa with three trophies. The privateer driver won his class in the Audi R8 LMS GT4 on the Aldo Scribante circuit in each of the three sprints.

Victory streak continued: The Chinese Hu Bo remains on course for success in the GT Super Sprint Challenge in his home country in the Audi R8 LMS GT4. In the third round of the race series at the Zhuzhou circuit, the driver of the Absolute Racing team prevailed in both sprints against three other opponents in the GT4 classification. In the first race, he had started from pole position, dropped back several places, but drove back to the front. In the second sprint, he defended his lead by 1.1 seconds against a hard-charging pursuer. As a result, he took the lead in the Audi Sport Asia Trophy, which rewards the region’s best Audi privateer drivers for the second year in a row.

Second title for Robin Rogalski: As in 2019, the champion of the Audi Sport Seyffarth R8 LMS Cup this year is again Robin Rogalski. At the finale in Most, the one-make cup featured four individual sprints. Rogalski won the first, Tom Spitzenberger the second race on the Czech circuit. As a result, the points were still tied in the standings with two competitions to go. The decision was made on Sunday: In the two final races Rogalski was unbeatable with two pole positions, two fastest race laps and two wins. Second place went to Tom Spitzenberger in each case. Rogalski ultimately won the title with a six-point lead. In the Junior classification of the one-make cup, Vivien Schöllhorn, the only lady in the field, prevailed. A total of 17 drivers scored points in the fourth season of the Audi Sport Seyffarth R8 LMS Cup.

Title success in Canada: Travis Hill has won the TC classification of the Sports Car Championship Canada presented by Michelin. In the Audi RS 3 LMS, the Canadian won five races for Team TWOth Autosport, his teammate Nick Looijmans another one. Marco Cirone from the Mark Motors Racing team contributed three more of the Audi RS 3 LMS’ total of nine victories in the 2021 season. At TWOth Autosport’s home race at Calabogie Motorsports Park, Hill and Looijmans even managed two one-two victories. In the finale at Canadian Tire Motorsports Park, a fourth and a second place was enough for Hill to win the title. The Canadian said the biggest success factors were the cooperation between technicians, engineers and drivers in his own team and the correct handling of the tires. In the past season, a total of 15 drivers scored points in the TC class of the new racing series. For Audi, it was the second consecutive title in Canada after Zachary Vanier’s success in the Canadian Touring Car Championship last year. Travis Hill is already the fourth driver to win a title with the Audi RS 3 LMS in the 2021 season: New Zealander Chris van der Drift won the TCR New Zealand, Latvian Valters Zviedris the Baltic Touring Car Championship BaTCC and Pole Bartosz Groszek the TCR classification of the Eastern European Eset Cup Endurance racing series. Other drivers also won class titles in Italy and in the TCR Europe.

Third victory of the season in the IMSA Michelin Pilot Challenge: Team Unitronic JDC-Miller MotorSports secured Audi’s third victory of the season in the TCR class of the North American racing series. American Chris Miller and his South African teammate Mikey Taylor, who had already won the season opener at Daytona, narrowly prevailed on the ninth race weekend in Virginia. Taylor, who had taken over the Audi RS 3 LMS from Miller during the pit stop, crossed the finish line 2.4 seconds ahead after two hours of racing. They are the only drivers to have won more than once so far this season. Before the finale at Road Atlanta in November, Audi is in second place in the manufacturers standings.

Trophy title at European level: For the second time in a row, Nicolas Baert won a TCR Europe class title in the Audi RS 3 LMS. After being the best rookie a year ago, the Belgian now secured the Trophy title ahead of 18 other contenders. At the seven race weekends, Baert stood on the podium in his class ten times and celebrated one victory in the process. At the finale in Barcelona, second and third places in the Trophy classification were enough for the young driver to win the title. The private Audi customer team Comtoyou Racing finished the season in second place out of 14 teams.

Class title in Italy: Eric Brigliadori remains best Junior in the TCR Italy. The junior driver in the Audi RS 3 LMS had already secured the trophy for drivers under 25 years of age last year. This season, the Italian from Team BF Motorsport collected the maximum number of points in this classification in five of the twelve races and ultimately won it with a 46-point advantage. The best race result by an Audi driver at the finale at Mugello was secured by Sandro Soubek. The Austrian guest entrant had advanced from twelfth on the grid to second place in the RS 3 LMS.

Two victories in Russia: On the sixth race weekend of the TCR Russia, Audi’s privateer drivers collected a total of four trophies. The first sprint on the Fort Grozny circuit was won by Egor Orudzhev. The Lukoil Racing Team driver celebrated his first victory of the season in the Audi RS 3 LMS after the original winner Zakhar Slutskiy received a penalty for an early start. Third place went to Dmitry Bragin of Taif Motorsport in another Audi. In the second race, Bragin managed to take victory while Orudzhev finished third.

Three podiums in Sweden: Tobias Brink finished the TC Scandinavia season on the podium three times. The privateer was third in each of the first two sprints at the finale at Knutstorp. From sixth on the grid, he improved to second position in the final race in the Audi RS 3 LMS. As a result, he is third in the standings out of 17 drivers, with third place also going to Team Brink Motorsport. With Isac Aronsson from Team Brovallen Design, an Audi driver finished the privateer classification of the series in second place.