{{ activeItem() }}
Twitter
04/20/21
.@Aust_Motorsport will be returning to the 2021 ADAC @gtmasters with an Audi R8 LMS shared by Sebastian Asch and Da… https://t.co/PqpmEsZSh3
04/20/21
Yaco Racing will enter an Audi R8 LMS in the 2021 @gtmasters season. The #54 entry will be shared by Simon Reicher… https://t.co/Y8hOYlXwtk
04/20/21
Behind the scenes in the Audi Sport ABT Schaeffler Formula E garage. Team Principal @allanmcnish takes us for a tou… https://t.co/QzWDcEGZIs
04/20/21
“Valencia is an unusual @FIAFormulaE circuit: Quick, flowing, almost no tight corners and has lots of run-off.” –… https://t.co/y0ow7JDA6o
Audi Sport on Twitter
{{ activeItem() }}
Facebook
04/20/21
Behind the scenes in the Audi Sport ABT Schaeffler ABB Formula E garage. Team Principal Allan McNish takes us for a tour. The Valencia E-Prix takes place this week on April 24 and 25. >> audi.com/FormulaE #FutureIsAnAttitude #ValenciaEPrix
04/19/21
Well done to our customers for their success with all four models from Audi Sport customer racing this past weekend – highlighted by the race victories for the Audi R8 LMS GT2 at Monza. 🇮🇹 🇩🇪 🇭🇺 🇨🇳 >> audi.com/GT2 >> audi.com/GT3 >> audi.com/GT4 >> audi.com/TCR #PerformanceIsAnAttitude
04/19/21
Race week: 🇪🇸 ABB Formula E Valencia E-Prix double-header on April 24 and 25. >> audi.com/FormulaE #FutureIsAnAttitude #ValenciaEPrix
04/11/21
Not our day in Rome. Both Lucas Di Grassi and René Rast ended the race in the wall, Lucas through no fault of his own and an uncharacteristic error from René. We’ll repair the cars and come back stronger at Valencia in two weeks’ time. >> audi.com/FormulaE #FutureIsAnAttitude #RomeEPrix
Audi Sport on Facebook 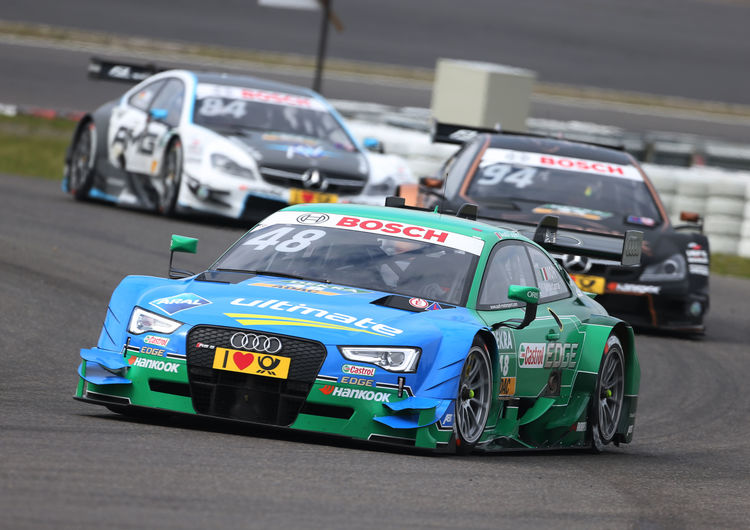 With a strong race on Saturday, Audi driver Edoardo Mortara (Audi Sport Team Abt Sportsline) advanced to second place in the DTM drivers’ standings at the Nürburgring.

The Italian in his CASTROL Edge Audi RS 5 DTM, in fifth place, had previously been the best Audi driver in the morning’s qualifying session. In turn one, Mortara managed to overtake Mercedes drivers Lucas Auer and Pascal Wehrlein, who had started in front of him. Subsequently, he outperformed the BMW of Bruno Spengler as well and held up to the pressure from leader of the standings Pascal Wehrlein up to the checkered flag.

“I’m very happy with my race,” Mortara said following his fifth podium result in the 2015 season. “I had a tremendous start today and a fantastic car. We’re pleased with second place – but we’re aiming for more.”

On taking second place, Mortara bumped his teammate Mattias Ekström by one point to third place in the DTM drivers’ standings. In an extremely close qualifying session in the morning, the Swede had to settle for 17th place and in the race recovered to position ten although his Red Bull Audi RS 5 DTM had suffered front-end damage in the starting commotion.

In the final stage, Ekström was supported by his brand colleague Mike Rockenfeller, who in the Schaeffler Audi RS 5 DTM of Audi Sport Team Phoenix had been defending position six for a long time. However, in a tussle with Mercedes driver Maximilian Götz, he lost several positions and in the end had to settle for an unrewarding eleventh place.

Adrien Tambay in his Playboy Audi RS 5 DTM took position 14 after having started from the last row following an accident in qualifying. Nico Müller in the Audi Financial Services Audi RS 5 DTM of Audi Sport Team Rosberg finished Saturday’s race in position 16, after being forced to get out of the way in the starting commotion and losing a lot of ground.

Even worse misfortune struck his teammate Jamie Green, who in his Hoffmann Group Audi RS 5 DTM had started the race with good prospects from the fourth row of the grid. Shortly following the start, the Briton was sent into a spin by BMW driver Tom Blomqvist and subsequently hit by Miguel Molina (Teufel Audi RS 5 DTM). This immediately ended the race for both of them. Timo Scheider (AUTO TEST Audi RS 5 DTM) became entangled in the collision as well and retired after eleven laps.

“We already lost the chance of scoring a better result in qualifying today,” said Dieter Gass, Head of DTM at Audi Sport. “We had four cars in the top ten but, unfortunately, at the wrong end of the first five rows. Edo’s (Mortara) performance in the race was top. That as many as four of our cars became entangled in collisions on lap one – including two of our three title candidates – is obviously very frustrating.”

Before the last three DTM races of the 2015 season, Edoardo Mortara and Mattias Ekström are trailing leader of the standings Pascal Wehrlein by 27 and 28 points, respectively. A total of 75 points are yet to be awarded. Sunday’s race at the Nürburgring will start at 13.25 (live on ‘Das Erste’).