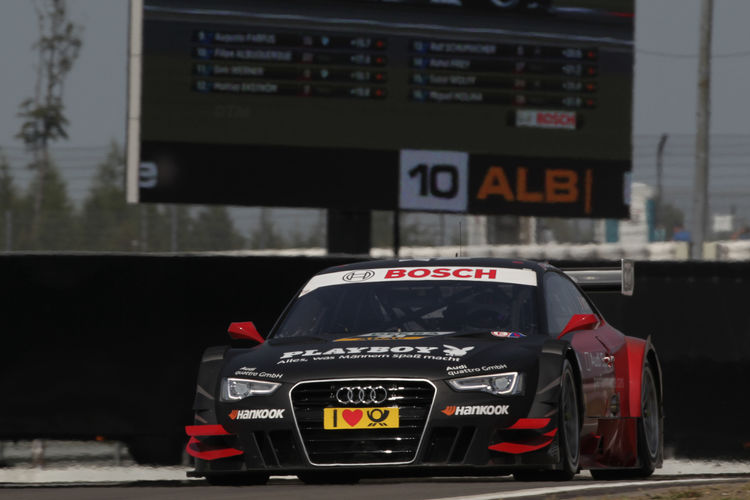 With a second place at the Nürburgring, Audi started into the second half of the DTM season. At the event, Edoardo Mortara and Mike Rockenfeller made up ground to the overall leader Gary Paffett and are now the best-placed Audi racers in the standings. With four A5 DTM cars in the points, Audi was the strongest brand in the top ten – and Rahel Frey the sensation of the race for many.

89,000 spectators (throughout the weekend) at the Nürburgring in dream weather made for a dream crowd. They saw a flawless drive by Edoardo Mortara (Audi Sport Team Rosberg), who in his Playboy Audi A5 DTM had started from position two and finished as the runner-up behind Bruno Spengler. “It was a hard race in this great heat,” said the Italian. “Bruno (Spengler) had two sets of new tires, I only had one. I gave everything but he was a bit quicker – not much but around a tenth of a second per lap. That was enough. It’s good to see that the work of the past few weeks and months is paying off. The improvements are notable.”

Mike Rockenfeller in his Schaeffler Audi A5 DTM in conditions of 33 degrees in the shade and track temperatures of nearly 50 degrees took fifth place. After a good start, the racer from Audi Sport Team Phoenix was running in third place in the early phase but then dropped behind Martin Tomczyk and Jamie Green. After a correction of the tire pressure, he managed to keep leader of the standings Gary Paffett at bay in the final phase. With 49 points each, Mortara and Rockenfeller on positions five and six are now the Audi drivers in the overall classification.

Filipe Albuquerque (TV Movie Audi A5 DTM) and Timo Scheider (AUTO TEST Audi A5 DTM) finished in the points as well. At the start, Albuquerque dropped from third to tenth place but then recovered to eighth and scored points for as much as the fifth time this season. Scheider as the best driver of Audi Sport Team Abt Sportsline took ninth place.

For Mattias Ekström in the Red Bull Audi A5 DTM the race was disappointing. The Swede lost a lot of ground at the start, managed to make up several positions but in eleventh place barely missed a points finish.

An impressive race was driven by Rahel Frey in the E-POSTBRIEF Audi A5 DTM. During some of the phases, the young Swiss was the quickest driver in the field, drove the fastest lap of all Audi drivers and the second-fastest one of the race in total. In the last third of the race, she managed to close the gap to Ralf Schumacher, attacked the former Formula One driver but was no longer able to overtake him. After starting from position 17, Frey finished in 14th place – her best result of the season.

Miguel Molina (Red Bull Audi A5 DTM) was quick as well. After being “turned around” on lap two by Adrien Tambay and dropping to the last position, the Spaniard recovered to 15th place. As a result of the unfortunate collision Tambay had to park his A5 DTM early in the pits after 14 laps.

“It was a difficult and strenuous race for everyone,” said Head of Audi Motorsport Dr. Wolfgang Ullrich. “We put four Audi cars into the top ten, that’s the best manufacturers’ result. We’d been hoping to be able to win the race. Edo (Mortara) drove a perfect race but more than that wasn’t possible. We had the disadvantage that he didn’t have new tires for the race like Bruno Spengler. That clearly makes a difference. But on the whole, you could see that we’ve made a step forward. With that, we now want to prepare for the next race.”

The seventh round of the DTM season will be held as early as next weekend, on the Dutch North Sea Coast. Therefore, the teams are traveling directly from the Nürburgring to Zandvoort where Mike Rockenfeller celebrated his first DTM victory last year.