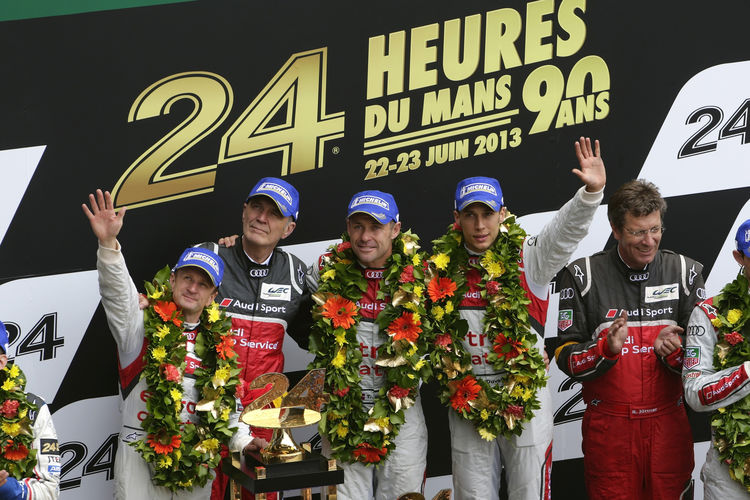 For the second time in succession, Audi has won the Le Mans 24 Hours with a hybrid race car and quattro drive, thus continuing its unique success story at the world’s most important endurance race. Victory was clinched by Loïc Duval (F), Tom Kristensen (DK) and Allan McNish (GB).

As expected, the twelfth triumph for the four rings at Le Mans was one of the most difficult and hardest-fought ones. Following a change in the regulations that was made at short notice, the three Audi R18 e-tron quattro cars on average were able to do two laps less on one tank filling than their main rival Toyota. The Audi drivers had to compensate for the additional pit stops by faster lap times on track – and did so in weather conditions that at times were extremely difficult.

Rain showers crossed the track again and again during the dramatic race. They resulted in numerous incidents and a total of eleven safety car deployments. The field ran for more than five hours under ‘yellow’ while the track was cleared and repairs were performed.

The three Audi R18 e-tron quattro cars, which are equipped with an electrically driven front axle, were the fastest vehicles in the field throughout the entire race – as well as the most efficient ones: Victory in the Michelin Green X Challenge, a competition of the cleanest, fastest and most efficient prototypes, went to Ingolstadt and Neckarsulm as well.

“We owe the twelfth victory of our brand at Le Mans to the consistent, innovative spirit of our engineers, the unconditional commitment of the entire team and the skills and strong nerves of our drivers. On behalf of Audi, I extend my sincere congratulations on this success to all of them,” said Rupert Stadler, Chairman of the Board of Management of AUDI AG, who, as usual, personally watched the race on location. “This marks another great success for Audi in which our hybrid system again prevailed and new technologies, which our customers will also benefit from in the future, were tested.” They included innovative radiators and matrix-beam LED headlights, which make optimum lighting of the corners at night possible – a crucial advantage at Le Mans.

“We knew that, not least due to the regulatory requirements, it would be very difficult for us this year,” commented Head of Audi Motorsport Dr. Wolfgang Ullrich. “As expected, Toyota was a very strong rival – but our Audi R18 e-tron quattro was in a class of its own. My thanks go to the entire team that worked for months to achieve this success.”

The twelfth Audi victory at Le Mans was achieved by the number ‘2’ Audi R18 e-tron quattro driven by Loïc Duval (France), Tom Kristensen (Denmark) and Allan McNish (Scotland) who had started the race from the pole position. For Duval, who had clinched the pole position on Wednesday, this was the first success at the classic French endurance race and the third for Allan McNish. Tom Kristensen, who has been the sole record holder of the race since 2005, triumphed for the ninth time.

The victorious Audi R18 e-tron quattro ran for 24 hours without the slightest technical problem. Duval/Kristensen/McNish took the lead at 21:43 on Saturday night and would not relinquish it anymore up to triumphantly crossing the finish line at 15:00 on Sunday. The three Audi drivers achieved the crucial one-lap advantage over the second-placed Toyota at an early stage and maintained it all the way to the end, even in partially chaotic conditions with torrential rain.

Misfortune struck the other two Audi squads that almost simultaneously were forced to make unscheduled pit stops shortly before the end of the seventh hour of the race and, up to that time, had made for an Audi one-two-three lead up to that time. Oliver Jarvis was touched by a slower vehicle and, as a result, suffered a punctured tire on which he had to complete nearly an entire lap that cost him two laps. In the thrilling final phase, Le Mans newcomer Lucas di Grassi (Brazil), Marc Gené (Spain) and Oliver Jarvis (Great Britain) managed to overtake the Toyota that had been running in third place up to that time, and to thus secure third place on the podium.

Due to changing the alternator Marcel Fässler (Switzerland), André Lotterer (Germany) and Benoît Tréluyer (France) lost their sure lead a total of twelve laps. With an impressive recovery the 2011 and 2012 winners managed to advance from 24th place to position five in their R18 e-tron quattro.

The 90th anniversary of the Le Mans 24 Hours was overshadowed by a fatal accident that occurred in the GT class shortly after the race started. “Obviously, this horrible incident dampens the joy about another great Le Mans victory for Audi in which our team and our drivers were under extreme tension for 24 hours and couldn’t make any mistakes,” commented Head of Audi Motorsport Dr. Wolfgang Ullrich. “We were all completely shocked by the news of Allan Simonsen’s death. During his career, he also contested races in the Audi R8 LMS. Our sympathy primarily goes to his family and friends but to the team of Aston Martin as well. It shows that you must never stop doing whatever is possible for safety in motorsport. This is the first fatal accident we’ve had to witness in 15 Le Mans years. I hope it’ll remain the last.”