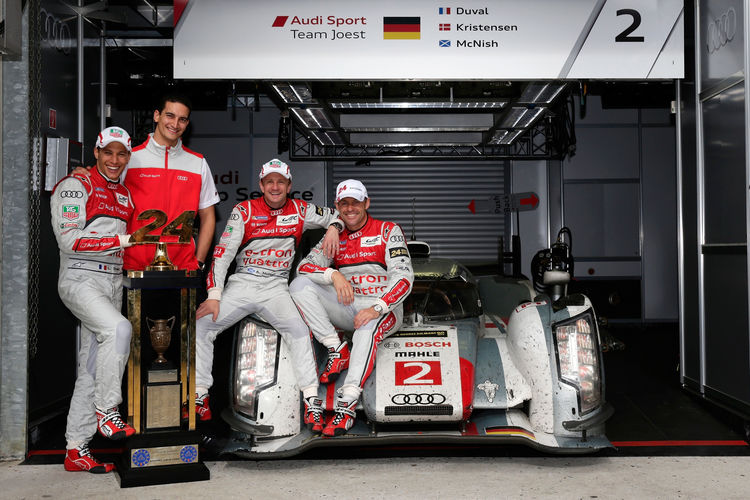 Loïc Duval, Tom Kristensen and Allan McNish have won the 2013 FIA World Endurance Championship (WEC) for Audi. This is what you should know about the new World Champions.

Did you know that...

... Loïc Duval and his wife Gaëlle, whom he married in September, and son Hugo recently moved to Geneva?

... the Audi factory driver, together with French Soccer World Champions Bicente Lizarazu and Christian Karembeu, played in a charity soccer match in October?

... Tom Kristensen has been having the names of his children, Oliver Victor, Carla Malou and Oswald William, painted on the sides of his helmet since 2007? The back of the helmet shows the word ‘Videre,’ a Danish expression that means ‘carry on,’ which his father Carl Erik often used.

... Allan McNish, since the beginnings of his racing career in karting in 1981, has been wearing helmets with the Scottish Hunting MacInnes Tartan on them?

... the favorite track of Allan McNish is Suzuka?

... all three drivers, on taking the WEC title, have won a World Champion’s title in motorsport for the first time in their careers?

... the trio has clinched the tenth World Champion’s title for Audi? The company’s track record reflects the 1982 and 1984 manufacturers’ World Rally Championship, the 1983 and 1984 drivers’ World Rally Championship, the drivers’ and manufacturers’ titles in the 1995 FIA Touring Car World Cup and in the 2012 WEC, plus now in 2013.

... Allan McNish is the first Scotsman since Colin McRae in the 1995 season to have won a World Champions’ title in car racing?

... Tom Kristensen, on Audi’s first sports car success in March 2000 at the Sebring 12 Hours, was sitting in the winning car as well as in 2013 at Austin when the 100th LMP triumph was achieved?

... this year’s success at Le Mans marked the ninth one for Tom Kristensen, the third for Allan McNish and the first for Loïc Duval in the legendary 24-hour race? Ten of these 13 single victories have been celebrated with Audi.

... Kyle Wilson-Clarke, the British race engineer of the trio, achieved his first Le Mans victory and his first WEC title this year?

... Loïc Duval has been driving for Audi for two years whereas Tom Kristensen and Allan McNish both competed under the symbol of the four rings for the first time in 2000? Kristensen is now driving for the squad from Germany for the 14th consecutive year. McNish drove in Formula 1 between 2001 and 2003 and therefore is experiencing his eleventh season with Audi.

... McNish and Kristensen have driven sports prototypes as well as DTM touring cars for Audi?

... Tom Kristensen wanted to become a bank manager as a child?

... he is the first Danish World Champion in car racing?

... Loïc Duval has a snake phobia?

... The Frenchman always puts on his left racing shoe first?

... he would have loved to have met Steve McQueen?