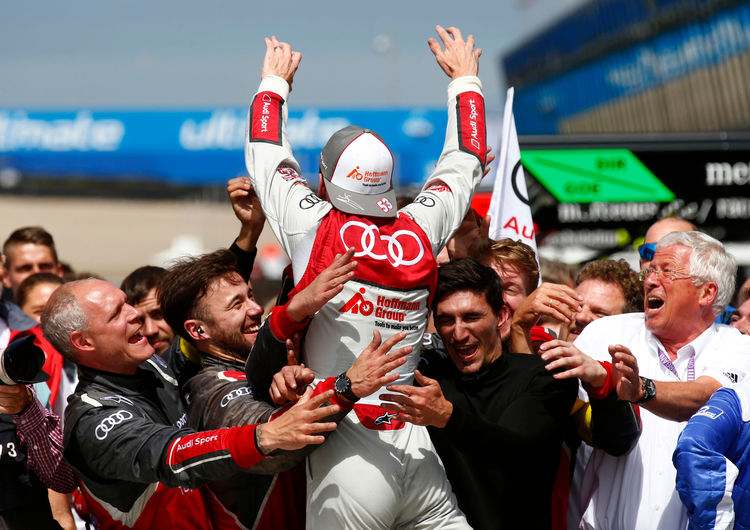 Disappointment on Saturday, party mood on Sunday: Audi experienced an emotional roller coaster at the DTM on the Dutch North Sea coast in front of a total of 38,000 spectators.

“Saturday was a very difficult day for us on which a lot of things went the way you wouldn’t wish for on such a weekend. But Sunday then had a lot of positives. We were fast and also pulled off an excellent team performance of a kind we hadn’t achieved yet this season and converted it into a good overall result for Audi. Jamie’s (Green) victory was impressive – particularly the way he controlled the pace at the front. Obviously, it was great for us that our second driver in contention for the championship – Edoardo Mortara – still managed to advance to third place. René Rast impressed me once more. This commitment on short notice was a real challenge for him. But he impressed me just like he did in the other championships we’ve used him in. I hope he had a little fun as well.”

“Following a less-than-pleasant Saturday, we achieved a strong result in the second race on Sunday. With the victory clinched by Jamie (Green), the third place by Edo (Mortara) and positions five and seven for Nico (Müller) and Mattias (Ekström) we achieved exactly what we’d been planning: a very good team result. I’m extremely happy that it worked out so well. In the second race, managing the tires was crucial. At the beginning of the race, we were under heavy pressure by Mercedes and, as a result, had to stop with Jamie on the first possible lap to keep from losing the lead. Consequently, it was clear that the end of the long second stint would also be a bit about survival. Jamie and Edo managed this really well. Because Nico and Mattias had a long first stint, they still had some arrows in the quiver.”

“The two fifth places in qualifying and the race on Saturday were okay. We scored a few points but could have achieved more as well. The pole position on Sunday was really great. And my first Zandvoort victory was something I’ve been dying to achieve for ten years. Zandvoort is one of the real driver tracks on the calendar. Winning here is really special for me. Many thanks to Team Rosberg that improved the performance of my Audi this weekend, especially for the long distance on Sunday. And thanks to Audi Sport for the good car. It was tremendous teamwork. I’m really happy.”

“We didn’t score the points at Zandvoort we would have deserved. Due to the penalty on Saturday, we lost eight to ten points that we would have urgently needed in the championship race. I’m now trailing Marco Wittmann by 17 points and will continue to battle. Although the podium on Sunday feels good it doesn’t erase what happened in the first race.”

“We took two seventh places. You don’t get a lot of points for position seven – but it’s still better than no points at all. This weekend, I wasn’t good enough in qualifying. And that’s the key to success at Zandvoort because overtaking is difficult on this track. I look forward to Moscow. That’s a track I really like to race on. Last year, we were very fast there. Our aim is to be even a little faster there this time.”

“Fifth place on Sunday with a strong race from P10 on the grid was a positive ending. We had a good start, a good strategy and a good pace. I think, with that, you can start the summer break with a good feeling. But the potential this weekend was greater. Unfortunately, qualifying on Saturday was poor because I threw away a very good lap by spinning in the last turn. This hasn’t happened to me in a really long time. Instead of on grid position five I was on grid position 22. As a result, points were no longer possible. Plus, there were these strange drive-through penalties for Edo (Mortara) and me. On Sunday, more would have been possible in qualifying as well. Lucas (Auer) ran through the dirt twice in front of me. As a result, I had less grip and again lost a possible fifth place on the grid. So, advancing from tenth to fifth was all the sweeter.”

“It was again difficult to achieve a good level for the one lap in qualifying. We’re pretty much at a loss of what’s wrong. On Saturday, our speed was good but there was no explanation of why it went so well in the race. On Sunday we subjectively improved the car but the gap to the front runners was pretty large for no obvious reason. Unfortunately, my race was over pretty soon after a good start. While turning into Turn 2, Augusto Farfus hit the right rear corner of my car and I crashed into a tire stack. The suspension was damaged and after that it made no sense to continue driving.”

“Zandvoort was the track where I said: if not there, then where? And, again, we were out in the middle of nowhere. That’s simply frustrating. My mechanics and my team are giving everything to get the car perfectly prepared – and it still doesn’t work out. Even though we’re all as frustrated as I am, we mustn’t stick our heads in the sand. We need to turn the car upside down and systematically exclude simply everything. Because I believe that I haven’t forgotten how to drive.”

“For me, it wasn’t a positive weekend because I arrived here with a good feeling. But in the DTM you have to constantly work in order to have a chance for victory one day – and that’s what I’m doing. We weren’t strong enough in qualifying and on Saturday, we even lost five positions on the grid. On Sunday, we could have achieved a better race result. But our strategy wasn’t perfect and then I had contact with Félix da Costa, who braked on the straight for no reason. That was very dangerous and not a good action on his part because as a driver you don’t expect that. Afterwards, my engine hood lifted and my race was over.”

“It was a great experience. I felt very comfortable. The team and Audi gave me tremendous support so that I could familiarize myself with everything. Obviously, you can’t expect miracles but in the race I felt more comfortable at the end than I had at the beginning of qualifying. If the race weekend started over now I might end up in a different position. It was incredibly good fun and a nice experience. I’d like to do it again.”

“At the start on Saturday, I almost stalled the engine and was running at the far left. Finally, I was able to start and was running in a straight line. Suddenly, I was hit by Maximilian (Götz). I’ve had severe pains in my hand ever since. Fortunately, there was no fracture and no major issue on the X-ray. I’ll have some more checks on Monday but as far as we can tell at the moment I should be able to drive a race car again in a few days.”

“The strong performance on Sunday with Jamie Green’s victory was a good sign as far as Audi’s performance capability is concerned. With Edo (Mortara) we’ve stayed in contention in the championship although, obviously, we’re disappointed about the loss of points on Saturday. I hope that we’re not going to be lacking these points in the end – especially since the competition in the DTM is so close this year. But that we’re still in contention for the championship shows once more that we never give up. That also applies to Nico Müller and Mattias Ekström who still made the best of their qualifying results.”

“Delivering two results like these on the favorite track of our two drivers and the team is not what we intend to achieve. That’s why’ve got to call this a real crisis. Now we’re definitely going to put the car to the test and see if we can find anything that we’ve failed to see. I hope we’ll find reasons for why things aren’t working at the moment. Congratulations to Jamie (Green)! His victory was the right answer to the wrong decisions about the penalties on Saturday. Audi’s overall performance on Sunday was superb. We’re already looking ahead to Moscow. I’m also sure that I’ll be able to motivate the squad again not to feel discouraged.”

It was a big up and down. We started with a weak performance in free practice. Things only began to work out after using the second set of tires in qualifying. What happened afterwards was awesome. Jamie Green drove a tremendous race on Saturday. I’ve rarely been so happy about a fifth place. On Sunday, he was simply sensational. Many thanks also to the other team directors and drivers, this was excellent teamwork. That Adrien Tambay wasn’t able to run in Sunday’s race at Zandvoort was a shame. A big compliment goes to René Rast. He’s never sat in this car before, set good times in qualifying and showed an impeccable race. Today, we’re going to celebrate.”