{{ activeItem() }}
Twitter
05/14/21
MEDIAINFO: 23 race cars from Audi Sport on two ADAC racing platforms &gt;&gt; https://t.co/lkRiEyXwTy… https://t.co/0LhtaiMbYn
05/14/21
[1/2] Wishing good luck to the Audi teams this week: 🇩🇪 ADAC @GTMasters at @MotorspArenaOC 🇩🇪 ADAC GT4 Germany at… https://t.co/5PiGe2pbN6
05/13/21
The next chapter of our #24hNBR history: the endurance classic in 2014. Crossing the finish line to win the race fo… https://t.co/hX31aOhn0y
05/10/21
Victories for the Audi R8 LMS in Europe &amp; Australia were just some of the highlights for our customers worldwide du… https://t.co/opbSgKfmkw
Audi Sport on Twitter
{{ activeItem() }}
Facebook
05/13/21
Looking back on the next chapter of our history at the ADAC TOTAL 24h-Rennen Nürburgring. Together with Christopher Haase - Fanpage, join us as we relive the race in 2014, which resulted in a faultless victory and a new race distance record. #PerformanceIsAnAttitude #24hNBR
05/10/21
Victories for the Audi R8 LMS in Europe and Australia were just some of the highlights for our customers worldwide during the most recent race weekend. Well done to all! 🇫🇷 🇦🇺 🇸🇰 🇩🇪 🇳🇴 🇳🇿 🇨🇳 🇧🇷 🇧🇪 🇮🇹 >> audi.com/GT3 >> audi.com/GT4 >> audi.com/TCR #PerformanceIsAnAttitude
05/08/21
From the back and into the points for Lucas Di Grassi in Monaco: Lucas moved forward from 17th to score a point in 10th, while René Rast’s kiss with the wall unfortunately ended his race. Up next: Puebla in Mexico from June 19–20. >> audi.com/FormulaE #FutureIsAnAttitude #MonacoEPrix
05/08/21
RACE DAY in Monaco, the first time that ABB Formula E is running on the full-length circuit. Don’t miss today’s Monaco E-Prix at 16:04 CEST. >> audi.com/FormulaE #FutureIsAnAttitude #MonacoEPrix
Audi Sport on Facebook 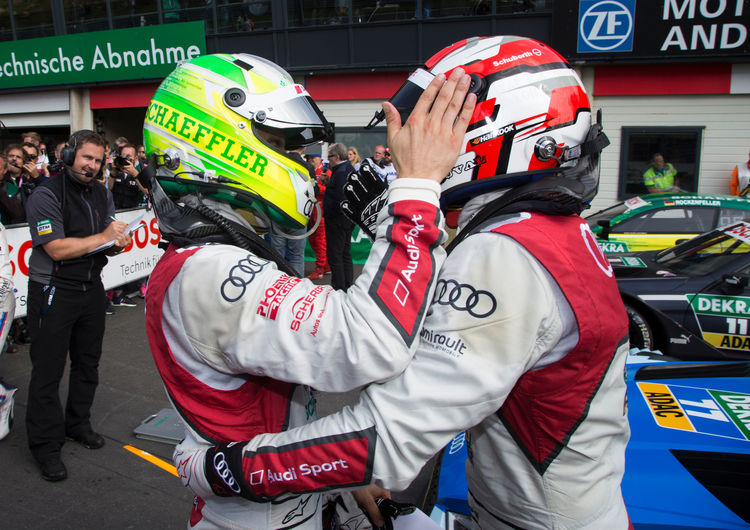 “Following the Saturday that wasn’t really our day, Sunday ended on a positive note for us. We showed a strong overall team performance. On both days, we had a good race performance, which the fastest laps set by René (Rast) and Loïc (Duval) show as well. But overtaking is an altogether different story at Zandvoort. Rocky did not get past Maxime Martin on Saturday and not past Marco Wittmann on Sunday, although he was able to quickly close the gap. I’m delighted that Loïc managed to score his first points right away with a podium. The way Nico (Müller) shielded Mattias (Ekström) on Sunday towards the rear was tremendous too. René and Jamie (Green) were a little unfortunate. Mattias is leaving Zandvoort as the leader of the standings again. However, the fact that we’ll have to again add weight for the Nürburgring is a drawback. It’s obvious that the current system does not accomplish any of the things it’s meant to do. Its unconditional abolishment is the only solution for this absurd condition.”

“It’s been a good weekend for me on the whole. We can be very pleased with it. These are important points for the championship. Obviously, I’d have liked to clinch a podium place on Saturday and won on track on Sunday because I just barely missed out on both. But after my foot injury I’m able to use my left foot again for braking. It’s not ideal yet, but getting better and better. That’s why I’m already looking forward now to our home round at the Nürburgring.”

“A really positive weekend with a double podium for Phoenix. For me, it was a nice surprise. I hadn’t expected it on Sunday until I crossed the finish line. My performance has made another step forwards on both days. Things were already going better in Moscow. We worked together well as a team here too. My two starts were a weak point. We had an issue that we need to resolve for the future.”

“For me, it was a tough weekend. I wasn’t fast enough in qualifying. On Saturday, I had a small mistake with a big effect. In race two on Sunday, in position three, it was good to score 15 points for the championship and taking the lead. I fought very hard for that. Next, I’ll be traveling to the Rallycross World Championship in France. After that, I’ll have to work on being faster again for the next race at the Nürburgring. With our weight, qualifying will be even more difficult than here.”

“This difficult weekend ended on a positive note. We started with a technical issue in the first free practice and, as a result, missed a lot of laps and were lacking this experience throughout the weekend. We were too slow. I had the worst qualifying sessions in my whole DTM career. We need to get a handle on that again for the coming races. On Sunday, I advanced from position ten to five and scored important points. I’m happy with that.”

“On Saturday, I had a poor qualifying and then a good race. On Sunday, with P4 on the grid, I had a good qualifying but a weak race. One of the mistakes was mine: on lap one, I left the track. When I overtook Robert Wickens later, he turned me around. I think we were both at fault in this, maybe he even a little more. The spin cost me a lot of time. In the end, I was fortunate enough to still be able to score points after such an eventful race.”

“A frustrating weekend! I only scored two points again. On Saturday, we weren’t fast enough. In the race I immediately had contact and lost a few parts in the process. On Sunday, I had contact with a Mercedes and my suspension broke as a result. I was coming out of the pit lane on cold tires and trying to defend myself. I saw Tom Blomqvist and didn’t know that Maro Engel was behind him. He apparently felt threatened and drove into my car a few times which caused the suspension to break.”

“After Saturday ended in disappointment for us, we showed once again that we never give up. In spite of a slow puncture, Mattias (Ekström) managed to bring home position four and, as a result, took the lead of the standings again. That’s something only Eki can do. The way Nico (Müller) shielded him towards the rear without being unfair was another class act. That was simply perfect teamwork! In the teams’ classification, we improved to position two at Zandvoort although, overall, we had higher expectations. But with the weight we had our backs to the wall to some extent. This weekend again showed how nonsensical the current system is. Like all the fans, we’re wishing for the performance weights to finally disappear.”

“Our weekend went really well. Loïc Duval on clinching position six in qualifying showed that he’s finally arrived in the DTM. On Sunday, he was in first place in free practice. In the race, he showed a consistent performance, advancing from position 15 to three and posting the fastest lap. Rocky had a chance for victory. He was able to close the gap to Marco (Wittmann), but overtaking is difficult at Zandvoort. He didn’t take any risks and was clever enough to take second place home, which then even turned into a victory. The team’s performance was right. Our guys again did the quickest pit stops. Now we’re looking forward to our home round at the Nürburgring.”

“For Audi Sport Team Rosberg this was not a good weekend on the whole. On Saturday, we still achieved some halfway positive results, but Sunday was rather disappointing. That we provided the best Audi driver in both qualifying sessions are positive aspects we’re taking home from here. Now, we’re going to look ahead and not back. Events at the Nürburgring will be difficult enough again.”