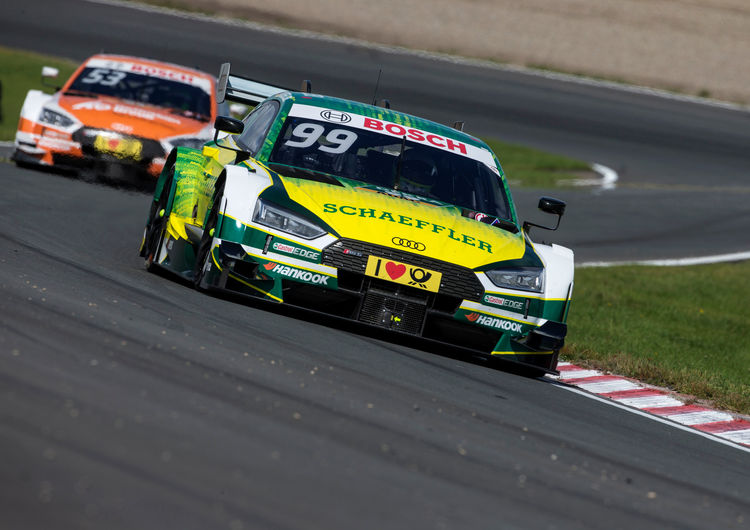 In the first of the two DTM races at Zandvoort in the Netherlands, Audi, in positions four and five, just barely missed the podium. In spite of these results, two Audi campaigners, René Rast (Audi Sport Team Rosberg) and Mattias Ekström (Audi Sport Team Abt Sportsline), continue to head the standings.

A preliminary decision was produced in qualifying on Saturday. Due to a heavy rain shower, all drivers were able to use only one fresh set of tires. René Rast from Audi Sport Team Rosberg as the best Audi driver ended up in position five on the grid, behind four BMW cars, after three Audi RS 5 DTM cars had still been listed at the top of the time sheets in the morning’s free practice.

In the race, René Rast on the first laps was slowed by BMW driver Augusto Farfus, which quickly caused his deficit to the leading BMW trio to grow. Consequently, Rast, following a late tire change, only finished ninth in spite of having achieved a new DTM track record of 1m 30.160s and having set the fastest lap for an amazing third time this year. Yet, with the two points awarded for ninth place, the DTM rookie recaptured the lead of the standings from Mattias Ekström (Audi Sport Team Abt Sportsline).

The Swede experienced a race to forget. Following his tire change on lap four, the seasoned campaigner on cold tires slipped into the gravel trap of the famous Tarzan corner. Although the two-time DTM Champion was able to continue the race in the last position and set fast lap times, he had to park his Audi RS 5 DTM shortly before the end of the race following a puncture of the left front tire. Before race two on Sunday, Ekström is trailing Rast in position two of the standings by only one point.

The best Audi driver on Saturday was Mike Rockenfeller (Audi Sport Team Phoenix), who advanced to fourth place from ninth on the grid, soon caught up with the three leading BMW cars, but was unable to overtake Maxime Martin in position three. “Fourth place is basically a good result,” said Rockenfeller. “Starting from ninth, you can’t expect a lot – especially here at Zandvoort where overtaking, obviously, is very difficult. I was stuck behind the BMW cars almost throughout the race and had a tough time with them. They did a good job, congratulations. But tomorrow we’re going to attack again!”

Directly behind Mike Rockenfeller, Jamie Green crossed the finish line in position five. The Briton had set the best time in the morning’s free practice, but in qualifying was slowed by Bruno Spengler’s BMW and, as a result, had to start from position 15. In the overall classification, Green is now separated by two points from Lucas Auer (Mercedes-Benz) in position three.

“This really wasn’t our day,” said Head of Audi Motorsport Dieter Gass following Saturday’s race. “We had higher expectations. However, with our grid positions and four BMW cars in front it was clear that it would be a difficult race for us. We were very fast in the race, but overtaking here at Zandvoort is an altogether different story. And if the front runners are able to manage the pace, it’s hard for the competition to achieve better results.”