DTM: Tough title race for Audi in the Eifel 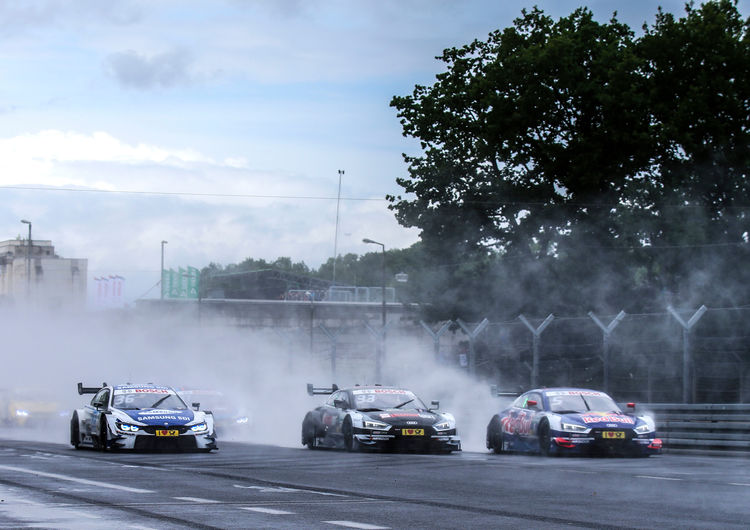 Close race for the DTM championship win: Before the last six rounds of the season, at least eight campaigners have realistic chances of winning the title. Four of them are driving an Audi RS 5 DTM: Mattias Ekström, René Rast, Mike Rockenfeller and Jamie Green.

“We can be very pleased with the way the season has gone so far,” says Head of Audi Motorsport Dieter Gass. After twelve races, Audi’s tally reflects five victories, three pole positions and nine fastest race laps. Three Audi campaigners – Mattias Ekström, René Rast and Mike Rockenfeller – are in the top spots of the drivers’ standings. Audi Sport Teams Rosberg and Abt Sportsline are leading the teams’ classification and on the manufacturers’ table, Audi, with 518 points, is clearly ahead of BMW (405) and Mercedes-Benz (361).

Still, expectations before the two races at the Nürburgring this weekend are subdued because of the “performance weights,” which are equally unpopular with fans and drivers, that were originally intended to compensate for minor differences between the three marques. A controversial change to the regulations has now resulted in Audi entering the Nürburgring weekend with 25 kilograms more weight than BMW although the Munich-based competitor had been the first to cross the finish line in each of the two most recent races.

25 kilograms are literally adding a heavy load to the Audi Sport squad because the additional weight on the 3.629-kilometer sprint circuit of the Nürburgring corresponds to a time loss of nearly half a second per lap, according to computer simulations. A look at last year’s results shows what this may mean. At that time, the gaps between the fastest 18 drivers in Sunday’s qualifying were within just 0.476 seconds.

“At first, this may sound like ‘mission impossible’ for our drivers,” says Dieter Gass. “But our philosophy is: you don’t have a chance – so use it! In spite of the difficult situation at the Nürburgring, we have to try to score important points and not exclusively focus on victories or the podium.”

DTM leader Mattias Ekström sees the situation in a similar light: “We’re going to have an extremely difficult time especially in qualifying. But those who know me know that I always fight and never give up. I’m traveling to the Nürburgring with a 14-point advantage and would like to defend my lead of the standings there as well.”

DTM fans can look forward to an entertaining weekend both on and off track including a performance by world-famous singer-songwriter Anastacia as part of the ARD Chart Show. In addition, they will have the opportunity to watch the DTM teams at work in the pit lane during the Pit View.

Tickets and fan packages are available online at www.audi.com/dtm. ARD will be airing live coverage of the two DTM races in the Eifel on Saturday (September 9) starting at 2:30 PM (CEST) and on Sunday (September 10) starting at 3:00 PM.

#DTMNuerburgring: Did you know that …

… Walter Röhrl in 1990 at the wheel of an Audi V8 quattro was the first winner for Audi in a DTM race at the Nürburgring?

… Nico Müller, René Rast and Mike Rockenfeller have previously won the 24-hour race at the Nürburgring?

... the Nürburgring is only about 3 km away from the home base of Audi Sport Team Phoenix and is Mike Rockenfeller’s round on home soil as well?