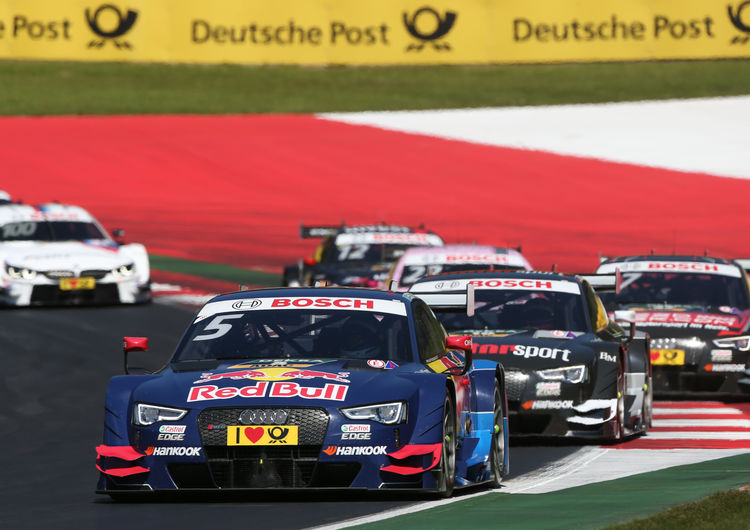 Audi Sport took three from a possible six podium positions in the two DTM races in Austria. Seven of the eight Audi drivers scored points. The Audi Sport quotes after the DTM weekend at the Red Bull Ring.

“I was delighted to return to Austria with the DTM. We were also spoiled by fantastic weather throughout the entire weekend at the Red Bull Ring. Unfortunately, the race results weren’t exactly what we had hoped. However, on Sunday in particular we saw a very strong performance by some of our cars – especially Mattias Ekström who drove from the midfield onto the podium and in doing so demonstrated our car’s potential. I remain positive and look forwards. I think we have a really good car and a strong team.”

“Of course we would like to have won at Spielberg. But you have to acknowledge that BMW was very strong here. For this reason, I believe that essentially we can be satisfied with three of a possible six podium positions. Mattias (Ekström) and Jamie (Green) drove very strong races on Sunday. I think victory for Mattias would also have been difficult even if he had started from the grid position that he would have deserved. A shame about Edo (Mortara) retiring, who could possibly have taken the championship lead on Sunday after his excellent race on Saturday. I say ‘possibly’ because he was hampered by a problem with the suspension, and it would probably also have been difficult for him to finish in the points without contact with da Costa. I don’t think anything at all has been decided in the championship race. Because the two leaders failed to score points on Sunday everything has closed up. The championship is only just beginning for several drivers.”

“Let’s start with the bad things: to be around tenth position twice in qualifying is not good enough to win races in the DTM. On Saturday I deserved the grid position because I was simply the crucial tenth too slow. But on Sunday I was good enough to be between third and fifth – and then somebody gets in my way. I’ve just about had enough getting cramp running so far to the toilet from the grid! In yesterday’s race there’s a crack immediately at turn one and I’m last again. On Sunday I tried to survive the first laps. Then to drive from eleventh on the grid all the way to second makes me proud and happy.”

“The weekend was a mix of highs and lows. On Saturday we were of course dissatisfied. After the bad result in qualifying we had no chance in the race to move up to the front. On Sunday I got on much better with the car and could set a good time in qualifying. As a result, the second race was quite a lot easier compared to the first. After three disappointing races without points it was a very good feeling to mount the podium again. Perhaps a little more would have been possible without the safety car phase and slow zones. Nevertheless, I’m delighted about the points and will attack again at the Lausitzring.”

“The weekend has a rather bitter aftertaste. But I’ll try to keep the good memories from Saturday and the great pace that we showed. I think I did a good job before the accident and the technical problem in the race on Sunday. Unfortunately the car was getting difficult to drive. It wasn’t easy to keep the others behind. there was a contact with António Félix da Costa and we both ended up in the gravel. It’s not important anymore who was at fault, but in the end we both scored no points. It would certainly have been possible to prevent this. I have the feeling I did everything right, but we couldn’t score the points that we deserved. I hope things go better at the next race and that we can show the good performance of the Audi RS 5 DTM.”

“All in all it was largely a positive weekend for me. The highlights were starting third on Saturday and the first points in the race. The second race didn’t go quite as expected and I think I would have deserved to score a point. But it wasn’t to be. Eleventh place and a car in one piece show that we are going in the right direction. Our qualifying pace also makes me optimistic. I’ve scored more points already than I did all last year and because of this I’m already looking forward to the next race.”

“After Hockenheim it was another weekend that didn’t go as I’d expected. Both qualifying session were not good. Twelfth yesterday was the maximum. In Sunday’s race the first lap wasn’t good, the strategy was also not suitable, because I was always in traffic. When I’d finally passed Timo and Bruno you could see that my pace was very good. A bit of a shame that only four points was the reward. Our race pace in Spielberg was positive. The rest we have to get together in qualifying. This is our big weakness.”

“Saturday and Sunday were very good with second and third in free practice, but unfortunately not in the two qualifying sessions. On Saturday the lap time just wasn’t there, even though the car and the lap were good. On Sunday we were quick in the first two sectors, but lost too much time in the final sector because of understeer. I had problems with the DRS in both races. On Saturday it didn’t work at all throughout the entire race, in the second race it stopped working after only five laps. It was of course difficult to defend. I had several very hard battles, but this is part of motorsport and it was all on the right side of the line. On the plus side in the end is a point. This is a start, but obviously far from satisfying.”

“Unfortunately, the race on Saturday was the only positive point of the weekend. I had fun, was fast and overtook several competitors. In the end I scored a point, which was important because in this hard-fought series you have to be happy with every top ten position. Unfortunately we didn’t get the set-up right for qualifying on Sunday. As a result I started from the midfield and then what happened today can happen. Robert Wickens was penalized for the collision, but any possible points were gone. However, I’ll keep my head up: we’ll now concentrate on the Lausitzring.”

“Unfortunately I didn’t get the results I hoped to get. At the moment we are finding qualifying difficult. Because of this we were not in the position to fight for the top positions. In the races I felt much more comfortable because the car was much better than in qualifying. Thanks in part to a good strategy, I was able to make up several places, even though overtaking isn’t easy here. This is the positive aspect that I take from this weekend. We have to be better in qualifying, then the better race results will follow.”

“It was a fantastic weekend for us. Edo (Mortara) was the best Audi driver on Saturday. With third place he demonstrated where we want to be – on the podium. The race that Mattias (Ekström) drove on Sunday was an absolute highlight. To start eleventh in this racing series and then to finish second is something very special. I also want to thank my team personally: the mechanics, who made a fantastic pit stop. But also the engineers because the strategy was quite unique. You also need the right driver for this. Mattias proved once again that he is the best racing driver. I hope that he continues to work on improving his qualifying – because he’d have things easier in the races …”

“The weekend was an emotional roller coaster. In the free practice sessions we were at the front, in qualifying we also hoped to be there, but then things didn’t go so well. It was a roller coaster. We now have to analyze what caused this. We managed to make the cars really quick on Sunday. This makes me optimistic. Unfortunately, we had problems with the DRS on Timo’s car and he wasn’t competitive. Despite this, he deserves praise for scoring a point. ‘Rocky’ showed at the end just how quick he was. But he was stuck in traffic beforehand and couldn’t overtake the competitors fast enough, which is why he couldn’t move up to second like ‘Eki’, even though he also had the speed. For this reason I’m not dissatisfied. We’ll build on this at the Lausitzring.”

“The weekend concluded positively on Sunday. On Saturday things just didn’t go well for us, even though we were pleased about the points for Adrien (Tambay). He also drove a good race on Sunday, but he went away empty handed. It was obviously fantastic that Jamie took the pole for us. I’m reasonably satisfied with the race result – a podium at least. Unfortunately we couldn’t hang on to Glock, but we have found a good base on which we can build for the next races. Congratulations to Mattias (Ekström) who drove an excellent race.”