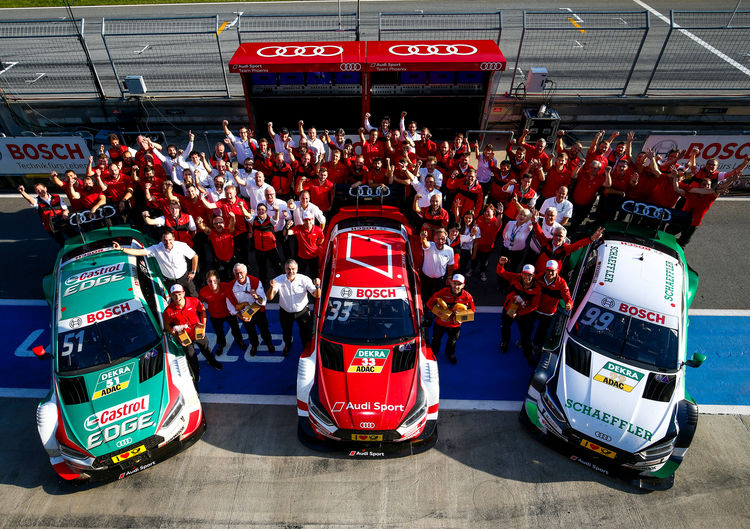 The 100th victory for Audi in the DTM, another double strike by René Rast and a total of five of six possible podium places: Audi remained unbeaten on the Red Bull Ring in Spielberg (Austria), too. The quotes.

Dieter Gass (Head of Audi Motorsport)
“What a weekend for Audi! No-one had expected what we achieved here: both races won and five of six possible podiums clinched – that’s incredible. On Saturday, we received a few gifts from our competitors, but the 100th Audi victory on Sunday is clearly credited to performance. Nico (Müller) and René (Rast) were simply the fastest. The pit stops, too, were top and perfectly timed. Mike (Rockenfeller) did a strong job in difficult conditions on Saturday. On the whole, we saw fantastic teamwork by our drivers and plenty of action on track. That René, following the difficult start of the season, is going into the finale with title chances is an incredible story. The DTM fans can look forward to a thrilling showdown at Hockenheim in which René has nothing to lose but everything to gain.”

René Rast (Audi Sport RS 5 DTM #33) position 1 / position 1
“An incredible weekend. After two poor qualifying sessions, we managed to score two brilliant victories. Although, in Saturday’s race, a lot of teamwork helped us achieve victory. Being able to help your teammates without a lot of coordination is a hallmark of teamwork. This is what we accomplished. The race on Sunday was a race driver’s dream: a perfect start, a good first lap, a perfect strategy, fantastic stops and no mistakes. Everything went according to plan. Before the season finale, we further reduced our gaps to the two championship leaders. Anything can happen at Hockenheim.”

Nico Müller (Castrol EDGE Audi RS 5 DTM #51) position 3 / position 2
“I’m very happy with the whole weekend. My team did a superb job and prepared a very fast car for me. To convert that into two podium finishes and to help René (Rast) keep the championship open was a big plus. You have to take your hat off to the people at home in Neuburg and Neckarsulm who didn’t give up and put us in the position of putting pressure on Mercedes once again before the season finale. I had a top performance in qualifying and was always fast in the race. Scoring these important points feels good. We’ll try that again at Hockenheim – or maybe even a little better.”

Mike Rockenfeller (Schaeffler Audi RS 5 DTM #99) position 2 / position 8
“A mega weekend for Audi. For me, personally, Saturday, when I nearly won the race, wasn’t bad. On Sunday, in qualifying, Marco Wittmann blocked me on my last and decisive lap. He didn’t do that on purpose, but it was unfortunate. I was so close that I had to stop my trial and returned to the pits. As a result, I was only in 13th on the grid, which is not enough because everyone knows how hard it is to advance. In the race, I was fast and we had a good strategy. Eighth position is okay.”

Jamie Green (Hoffmann Group Audi RS 5 DTM #53) position 5 / position 12
“Saturday was quite okay. In qualifying, I wasn’t particularly good on a wet track but on a dry track in the race I was able to benefit from the restart and advanced from tenth to fifth. That was my best result of the season so far. On Sunday, I took twelfth in qualifying. That wasn’t good but also wasn’t bad compared to the other Audi cars. I drove a long first stint and in the end wanted to overtake on fresh tires. But, unfortunately, I wasn’t fast enough then. I was driving in a long line of cars and in twelfth position scored no points.”

Robin Frijns (Aral Ultimate Audi RS 5 DTM #4) position 11 / excluded from the classification
“Qualifying on Saturday in eighth position wasn’t bad. Then, in the race, I was involved in a collision as early as on lap one, but was still able to attack in spite of the damaged car. In Sunday’s race, I initially made up ground to the front runners. But after the pit stop, the car suddenly felt completely different and understeered. We’re now going to take a close look to see what exactly caused this.”

Loïc Duval (Audi Sport RS 5 DTM #28) DNF / position 15
“For me, this was the second difficult weekend in a row. On Friday, we were doing well. In qualifying on Saturday, we at least managed to take eleventh position but, unfortunately, had the crash on lap one in the race. On Sunday, in qualifying on a wet track, we were in the top ten on the first set of tires. When the track dried off I wasn’t able to improve. In the race, we weren’t fast enough.”

Thomas Biermaier (Team Director Audi Sport Team Abt Sportsline)
“It was another incredible weekend for Audi, again two victories for René (Rast). Congratulations to him and to Audi Sport Team Rosberg. We were very happy with Nico (Müller). He finished on podium twice and had a good weekend. Robin (Frijns), unfortunately, scored no points. That’s a disappointment.”

Ernst Moser (Team Director Audi Sport Team Phoenix)
“It was a surprise that the Audi RS 5 DTM clinched a one-two and and one-two-three result at the Red Bull Ring. That was simply a dream and not to be expected at the beginning of the season. Congratulations to the whole squad. Mike (Rockenfeller) was in contention for victory on Saturday, he was always within striking distance and in the end finished second. It’s a shame that Loïc (Duval) retired early on Saturday because his speed was okay. On Sunday, however, it wasn’t. Mike, on Sunday, still advanced to eighth position in the end.”

“I’m unbelievably happy. Four victories in succession! What René (Rast) has achieved in recent weeks is simply incredible. Thank you very much to Audi for a fantastic car. And thank you to Abt and Phoenix: that was perfect teamwork. We’ve made the championship a thriller up until the season finale at Hockenheim.”