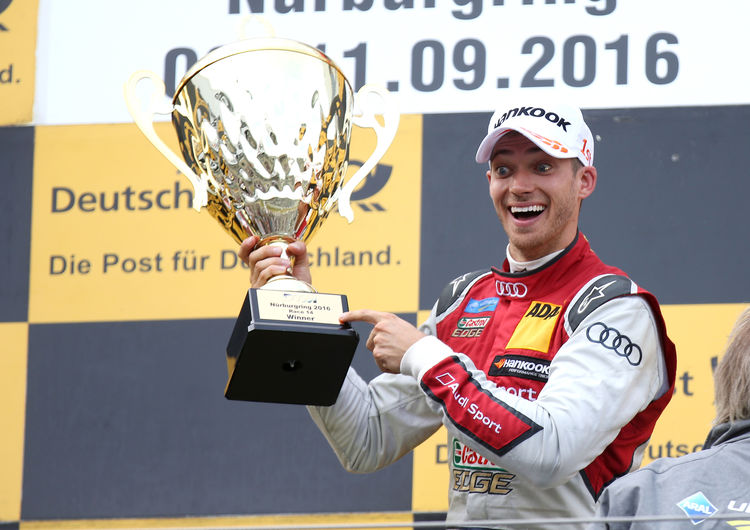 “The 50th victory of Audi Sport Team Abt Sportsline and the great race on Sunday ended the weekend that had been somewhat disappointing up to that point on a positive note. In the race, our cars were very fast, but in qualifying, we simply didn’t manage to create a good starting base. That’s now our main task for the next races. We’re going to do everything within our means to continue the battle for the championship full-force.”

“The tremendous race Sunday compensates for the Saturday that was somewhat disappointing for us. We’re still struggling somewhat using the full potential of the tire on the crucial lap in qualifying. That’s a disadvantage. But in the race, that’s an advantage for us because we can drive longer and more consistently with our Audi RS 5 DTM than our competitors. That pays off particularly in the longer race on Sunday. Very frustrating was the drive-through penalty for Jamie Green because he could have scored good points as well.”

“We had a tremendous race car on Saturday. It was a shame that (Tom) Blomqvist blocked me a little and I wasn’t able to overtake him. Otherwise a better result would already have been possible on Saturday. I gave it a try, we brushed each other and I slightly damaged my car in the process. That’s why position four was still okay. The race on Sunday then was really good. I had a good start from position six and immediately managed to overtake two drivers. In the first part of the race, I pursued the BMW cars and Lucas (Auer). I saved my DRS and took it easy on my tires and my brakes. When the others pitted before me, I knew that we’d be able to win with a different strategy. The team did a fantastic job. They called me in to pit at the right time. The stop was good and the car top-class. We benefited from being able to drive on a clear track. After the pit stop, I only had to overtake (Lucas) Auer and he acted in a very fair manner. Everything worked out well. I’m happy to have mounted the top of the podium again, to have scored 37 points and being back in the title race.”

“Saturday was very good. It’s always good to finish on podium. On Sunday, I did a good job in qualifying, but we were seventh on the grid. Initially, things were going well in the race. Then I was blocked by Augusto Farfus and I lost a lot of time. Following my pit stop, I came alongside Gary Paffett in turn 1. We touched and he spun. My car was damaged in the process and I received a drive-through penalty. That was frustrating because it wasn’t my fault one hundred percent. With the damage to the car and the drive-through penalty, my chances for points were gone. There wasn’t a lot I did wrong today, but I didn’t score any points.”

“Friday and Saturday didn’t start in a really exciting way. I was struggling to get a good feel for the car. Fortunately, there’s also a Sunday and since Sunday I’ve been feeling more comfortable again in the car. In terms of the set-up we came up with what I need. Sunday’s race was a lot of fun. I was relatively fast and had some nice battles. It would be great if we could start that way on Friday for a change. If we manage that, the outcome will be different than a fourth place too.”

“Obviously, I’m happy about the ten points on Sunday. We made up nine places in the race on both days. That was great. But my qualifying performance irks me a little. Following the best time in free practice on Sunday, expectations were high. Then, having to start from position 14 was frustrating. But I think we’ve begun to understand what’s been causing this. The big aim is to start from the first three rows in the last four races at Budapest and Hockenheim and to score plenty of points.”

“Unfortunately, I didn’t score any points at the Nürburgring. But in terms of performance, theoretically, points would have been possible twice. We need to rate this as a positive even though at Audi we’ve generally tended to have a hard time in qualifying. I can draw the positive conclusion that at least within the Audi squad we’ve managed to catch up. We’ve made a development step. I’m taking the positive feeling I had from Friday to Sunday with me. It’s clear that scoring points is difficult when you start so far from the rear. On Saturday, we could have scored points. In the second stint of Sunday’s race, not a lot was possible with the new tire. Plus, the pit stop wasn’t perfect.”

“Expectations were very high before the weekend. The team and my mechanics did everything to give me the best possible car for our home round. Following this so far poor season, we tried everything to clinch a good result here. I’d like to thank my team for that. However, at the moment, I’m not able to move the car fast enough – particularly in qualifying. And if you have to start from the far rear of the grid there’s simply not a lot you can do in the races. Obviously, I’d have wished for a lot more for my team, my fans and myself here. Now we’ve still got four more races and I’m going to give all I can to support Audi in the title race.”

“I expected a little more of this weekend, especially after my victory last year. The point on Sunday would have been a positive but, unfortunately, there was a retroactive time penalty and position 20 instead of position ten. Qualifying on Sunday was positive. I was just as fast as Audi’s top drivers. Now I’m looking forward to Budapest. I like the track and have been on podium there before. I hope we’ll manage a better result there again.”

“It was a difficult weekend because we were struggling with the grip level of my car and need to find a solution for that before Budapest. But the second race gives me a positive feeling. I started from the last position and was able to help a little with respect to Audi scoring so many points.”

“The 50th victory of our team in the DTM is definitely special. We celebrated our first one 15 years ago with Laurent (Aiello) at the Nürburgring as well. Now Edo (Mortara) with a tremendous race completed the 50 for us. My thanks go to all our drivers and particularly to the whole team. We arrived here with the maxim ‘now more than ever’ – and everyone abided by that. I’m incredibly proud of our squad which is fully motivated to clinch the title for Audi in spite of the advantage that BMW has. That’s why the party for our 50th DTM victory still has to wait a little.”

“We continued to sort ourselves and made a step ahead in terms of handling the tires. Timo (Scheider) and Rocky, too, are now feeling the tires a lot better. Still, we’re always lacking a tenth in qualifying and that’s hard to understand. At the moment, we don’t have a solution for this yet. Above all, we’re trying to keep the team’s motivation at a high level, which is incredibly hard. In the first race, Timo could have scored points. Unfortunately, he then received a drive-through penalty, but a steep development was noticeable in his case. Now we’re focusing on the remaining four races and will continue to try to eliminate the problems.”

“First of all, ‘well done’ to Edo (Mortara). Mattias (Ekström) and Nico (Müller) drove great races too – congratulations! The potential was obvious. It’s a real shame but, unfortunately, we’re out of the title race now. We’re going to concentrate on the next races and try to support Edo in the battle for the championship.”