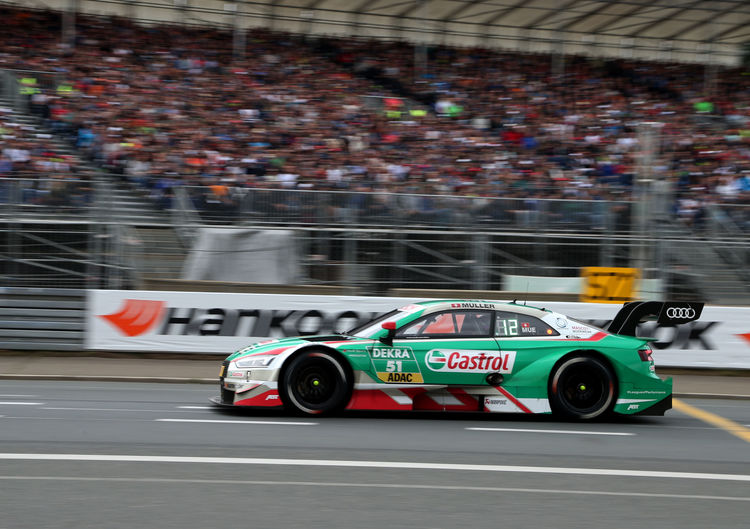 With two Audi RS 5 DTM in the points, Audi recorded a stronger result in Sunday’s DTM race at the Norisring than the day before. Nico Müller and Robin Frijns clinched seventh and eighth respectively for Audi Sport Team Abt Sportsline. Defending DTM Champion René Rast suffered a bout of bad luck.

With an even more impressive crowd of spectators looking on than on Saturday, the DTM provided spectacular motorsport featuring exciting battles, many overtaking maneuvers and a close finish on the street circuit in Nuremberg. One of the main protagonists in the race was Nico Müller. Starting the race as best Audi driver in eleventh position, the Swiss made up several positions immediately. After an early pit stop to change tires, Müller held his ground amidst a fiercely battling group of BMW and Mercedes-Benz drivers and ultimately crossed the finish line in seventh place.

“That was a tough race,” said Nico Müller. “We really struggled on this track, but we scored some important points, which is small reward for the hard work. The team did a great job throughout the entire weekend. We were a little unlucky on Saturday otherwise we would have scored points as well. Now I’m looking forward to Zandvoort. I hope that we’ll be a little more competitive again there.”

Müller’s teammate Robin Frijns only changed tires in the 40th of 68 laps and with this strategy moved through the field from 16th on the grid to eighth place. The DTM newcomer therefore scored points for the fourth time in his first season.

René Rast was also on course to score points. The defending DTM Champion decided to make a late tire change. He benefitted from the fact that he could run free of traffic at the head of the field. However, he went away empty handed: due to a defect on his Audi RS 5 DTM air-jack system Rast lost any chance of a top result at the pit stop. Teammate Jamie Green suffered a puncture on the opening lap. Rast and Green finished 14th and 15th. The fastest race lap for Green was little consolation for Audi Sport Team Rosberg.

Audi Sport Team Phoenix also went away empty handed in Nuremberg. For Mike Rockenfeller (16th) the strategy of stopping to change tires at the end of lap one did not work. Loïc Duval was handed a drive-through penalty after touching the BMW of Augusto Farfus. As a result, the Frenchman dropped to last place.

“We saw an exciting race with many great battles just as we want it in the DTM,” said Head of Audi Motorsport Dieter Gass. “With two cars in the points we were slightly better than yesterday. Realistically seen we couldn’t really expect much more following the difficult first race on Saturday. So it’s a real shame that our fastest car – René (Rast) – had a problem during the pit stop. He’d put himself into a good position and could have been fourth or fifth today.”

The DTM continues at Zandvoort (Netherlands) on July 14–15. The finale of the electric racing series Formula E is held at the same time in New York (USA) where the Audi Sport ABT Schaeffler team still has a chance of winning the teams’ classification.