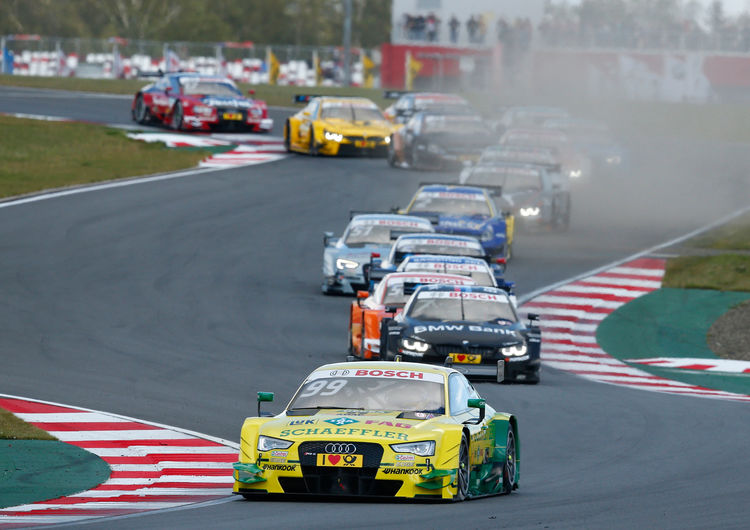 Audi celebrated its seventh victory of the DTM season at Moscow Raceway and left Russia as the leader of the drivers’ and manufacturers’ standings. Quotes by the Audi squad.

“This has been a dream result for Audi today. We saw two thrilling DTM races and an extremely strong Audi RS 5 DTM in Russia. We have to remember that we were racing with very heavy cars here. A big ‘thank you’ goes to the entire squad that had to work extremely hard on Saturday to prepare the cars from scratch again after the two accidents. That was a really strong performance. That the crew that got the least amount of sleep even delivered the quickest pit stop on Sunday says it all. This weekend has shown yet again that at Audi we close ranks when it matters. That we took the lead in the drivers’ and manufacturers’ standings again is the reward for the hard work that was done. Plus, the fact that each of our teams has now won a race this season speaks for the strength of our squad.”

“Moscow was an event with ups and downs for me this year. On Friday and Saturday, we weren’t optimally sorted. As a result, I finished race one only in tenth place. Afterwards, we made some minor changes that went exactly in the right direction. On Sunday, I had a tremendous car, plus that little bit of fortune that’s needed to clinch pole. The start went well. I was able to defend my position in the first three corners and then pull clear of the field. Subsequently, I was able to control the race.”

“The trophy and the champagne for third place on Sunday belong to my mechanics, who made this success possible with their commitment in the first place. Even though I was responsible for their nightshift with my collision on Saturday, I’m not going to change my driving style. I’m a passionate racer and whenever the opportunity to overtake presents itself I’m going to use it – that hasn’t changed even after 15 years of racing in the DTM. The situation in the championship continues to be very close. Motorsport fans can expect three more thrilling race weekends.”

“After five races without points, we scored a large number of points again here at Moscow and, with positions four and five, have even managed to reduce the gap to the top of the standings. So, we’re back on the right track. Our Audi was top this weekend. With a car like that even more would have been possible – especially on Sunday. Unfortunately, the pit stop didn’t work out. If we put an equally strong Audi on the grid in the next races, I’m expecting quite a bit in the season’s final sprint.”

“I was expecting a difficult weekend. And it turned out to be the toughest one for me so far this year. At least, I was able to grab a few points that may still prove very valuable in the battle for the championship. After taking sixth place yesterday, I was really struggling to bring position eight home on Sunday. More was simply not possible.”

“Moscow was my first race weekend this year on which I scored points in both races. That’s not so bad. But on Sunday, there was clearly more potential than another ninth place. At the end of the first lap, I made a mistake and, following a good start, dropped to position seven. Our strategy may not have been the best one either. As a result, I suddenly had Pascal Wehrlein on my heels and was really busy keeping him behind me, but managed to do that.”

“My collision on Saturday when I suddenly spun and was hit has been the most serious one in my career so far. That’s why it was good to immediately get back into the car – that was important for my self-confidence. The positive finding from this weekend is that our RS 5 DTM works well and is quick even with plenty of additional weight.”

“Unfortunately, the weekend at Moscow has been a reflection of my season so far: it’s just not panning out. We tried everything and battled and showed our potential. Now, we’ve still got six races on tracks I like and on which I’ve previously achieved good results and times.”

“An exciting weekend. Thanks to the tremendous support by the team and by Audi I managed to improve session by session in my DTM debut. On Sunday, I was only lacking three tenths from the pole position of my team-mate Mike (Rockenfeller). Unfortunately, in the race itself I was hit early by a rival and lost a lot of ground. Afterwards, I had a lonely race. My lap times were good and I learned a lot. It was a great experience, ‘thanks’ to everyone for this opportunity. Now I’m going to concentrate on the battle for the title in Formula 3 again.”

“First of all, congratulations to Audi and ‘Eki’ on clinching the dual lead of the standings. Our team scored with both cars at Moscow. That’s not so bad for starters. But especially on Sunday, we could have even done better than taking positions five and nine. Jamie (Green) could have clinched pole in qualifying if he’d had a clear lap. In the race, we unfortunately bungled his pit stop. Without this slip, he’d have gone out again in front of Bruno Spengler and could, as a minimum, have finished as the runner-up. Nico (Müller), after a braking mistake on lap one, delivered a strong race and brilliantly defended his position against Pascal Wehrlein’s attacks.”

“This weekend offered everything that describes motorsport at its best: thrilling qualifying sessions, gripping races, a bit of drama and a comeback by Mattias Ekström, whom some had already written off on Saturday afternoon. Congratulations to Mike Rockenfeller and Audi, but for us, Mattias’s third place is like a victory as well. ‘A thank you’ to our guys in the pits: in a nightshift, they prepared two cars again from scratch and then, totally cool, delivered the two quickest pit stops of the day. This team spirit makes me feel proud and is going to support us through the remainder of the season.”

“Moscow seems to be a good track for us because, after 2013, we’ve now won here for the second time. ‘Well done’ to Mike (Rockenfeller), who, just like the whole squad, never gave up. Following the events at Spielberg and the weeks afterwards, this was a good sporting response.”