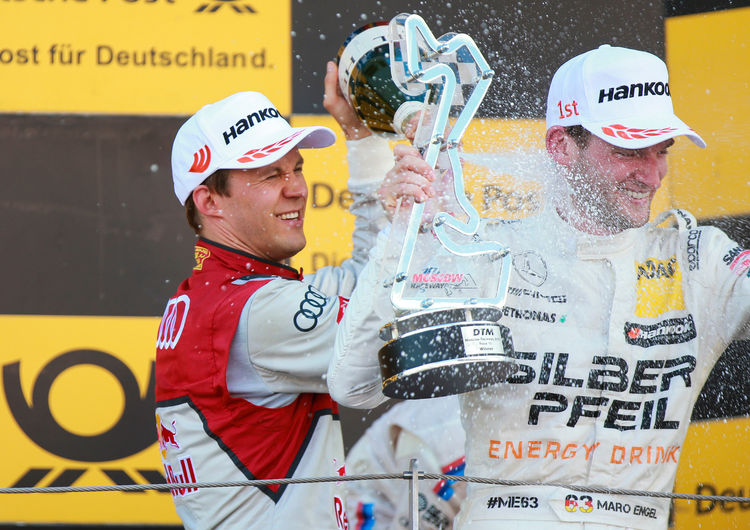 Dieter Gass (Head of Audi Motorsport)
“We’ve seen two tremendous races again in Moscow. Especially Sunday was incredibly action-packed from lights to flag. As a motorsport fan, you couldn’t wish for better entertainment. From Audi’s perspective, the one-two win on Saturday was obviously a dream. On Sunday, like previously in Budapest, the early safety car thwarted our plans. Fortunately, our guys managed to battle their way through the field back to the front, improving our position in all three championships as a result. That’s what we’d like to build on at Zandvoort four weeks from now where, in terms of the tires, we may be in for the greatest challenge of the year. As a DTM fan, I wouldn’t miss out on Zandvoort.”

Mattias Ekström (Red Bull Audi RS 5 DTM #5) position 8 / position 2
“Basically, I’m very happy with my performance this weekend. It’s a shame that Timo Glock pushed me off track in Saturday’s race. That cost me a lot of time and I had a few technical issues as a result as well. The race on Sunday was very entertaining.”

René Rast (AUTO BILD MOTORSPORT Audi RS 5 DTM #33) position 1 / position 4
“A good weekend, I scored a lot of points. On Saturday, I won and on Sunday I came fourth, plus I took three points home from the qualifying sessions. So, as far as that goes, I’m happy. However, in the second race we could have even finished third with a better stop. I lost a lot of time pitting. Fortunately, the field was compressed again afterwards and I was able to make up ground. In the end, we got off lightly.”

Jamie Green (Hoffmann Group Audi RS 5 DTM #53) position 9 / position 5
“This wasn’t an easy weekend for me because I didn’t manage to extract the optimum out of the car in the qualifying sessions. In the races, especially on Sunday with position five, things were clearly going better. That makes me optimistic that we’ll be able to strike back in the next round at Zandvoort.”

Mike Rockenfeller (Schaeffler Audi RS 5 DTM #99) position 2 / position 14
“Arriving here with a broken foot without even knowing if I’d be able to drive at all and then going home with a second place is definitely great. Obviously, I’d have liked finishing on podium on Sunday too, but from position 16 that’s difficult, especially since the safety car didn’t exactly play into our hands. But, as I said, considering that I had to brake with my right foot, I’m extremely happy. Thank you to Audi, my team, my doctors, my physiotherapists and all the others who made it possible for me to be able to race here in the first place. And congratulations to René (Rast) on his victory on Saturday and to Eki (Mattias Ekström) on the lead of the standings.”

Nico Müller (Playboy Audi RS 5 DTM #51) position 15 / position 16
“I had great expectations of Moscow because I was always doing well here in the past. Unfortunately, a lot went wrong in the qualifying sessions. On Saturday, I was unfortunate with the yellow flag. In addition, the set-up wasn’t right. And on Sunday, I was completely lacking pace. Normally, I’m always good in qualifying, but there are days like these in the DTM where a lot of things don’t fit. And if you have to start from the rear, racing becomes difficult for us in the DTM – this is exactly what I experienced here in Moscow. Zero points – that’s painful. But at Zandvoort, we’re going to attack again.”

Loïc Duval (Castrol EDGE Audi RS 5 DTM #77) position 11 / position 15
“In the light of the point scores, things are obviously looking very bad, so I’m disappointed too. But the fact that our speed was good throughout the weekend is a positive. We were in the top ten in all the qualifying sessions. Unfortunately, a better result in the race on Saturday wasn’t possible because of the grid penalty. On Sunday, things initially looked promising with our strategy. But, unfortunately, this turned out to be the race where we had the worst vehicle balance of the whole weekend and weren’t competitive. I feel that we’d have deserved taking points home from Moscow. In the end, it was at least a positive result for Audi and I’m happy about that too. Now I’m looking ahead to Zandvoort and hope that we’ll be able to build on our development there.”

Thomas Biermaier (Team Director Audi Sport Team Abt Sportsline)
“Mattias (Ekström) showed another awesome performance this weekend and deservedly continues heading the standings. On Saturday, Timo Glock unfortunately cost him valuable points and on Sunday, the safety car thwarted our plans. But the way he fought back to the front was Eki at his best. I take my hat off! For Nico (Müller), unfortunately, this was a weekend to forget. It already started on Saturday in qualifying with the yellow flag that came at exactly the wrong time for him. We’re going to get past that now and are excited about Zandvoort where we intend to extend Eki’s lead.”

Ernst Moser (Team Director Audi Sport Team Phoenix)
“Personally, I always enjoy coming to Moscow, not least because we’re always pretty successful here. This is particularly true for Rocky (Mike Rockenfeller). He again showed a strong performance here this time. That he finished on podium on Saturday in spite of his injured foot was amazing. With Loïc (Duval) we were lacking a bit of fortune in the race. In the qualifying sessions, he was just a few tenths away from the top 3 positions.”

Arno Zensen (Team Director Audi Sport Team Rosberg)
“A tremendous weekend for us with another victory. After René (Rast) won on Saturday, we were able to score important additional points on Sunday with him in fourth and Jamie (Green) in fifth place. Unfortunately, our pit stops on Sunday didn’t go well at all. We know that we have to improve there and are intensively working on that. In the teams’ championship we’ve extended our advantage to 50 points and in the drivers’ championship, René is trailing the front runner, Eki (Mattias Ekström), by just one point, so we’re traveling to the next round at Zandvoort with respective motivation.”