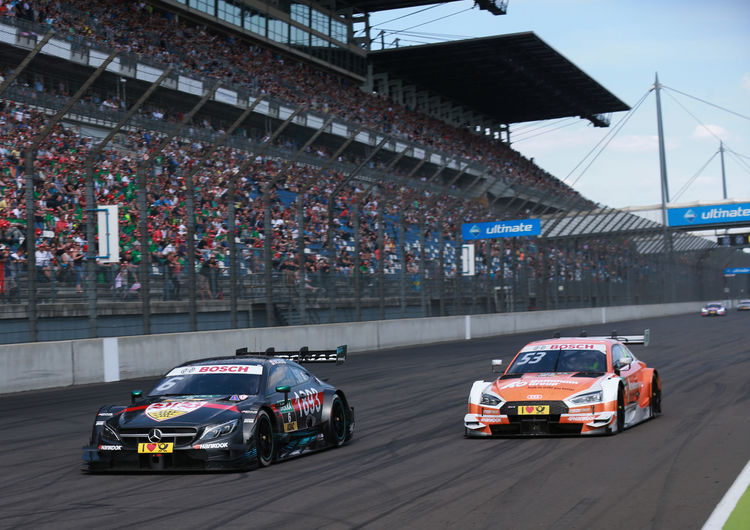 67,500 spectators (throughout the weekend) experienced a spectacular motorsport festival and another strong showing of the Audi RS 5 DTM. René Rast’s first DTM podium on Saturday was followed by a one-two result on Sunday. Quotes from the Audi camp.

Dieter Gass (Head of Audi Motorsport)
“We experienced a tremendous motorsport festival at the Lausitzring. The crowd was impressive, especially on Sunday. Obviously, that was the outstanding day for us, too: a one-two victory and five Audi cars in the top seven positions – you could hardly wish for more. We’ve now won two of the first four races and had at least one driver on podium every time. This speaks for our squad and the new Audi RS 5 DTM that is extremely strong over the race distance. In qualifying, there’s still some room for improvement, although Jamie (Green) on Sunday was only lacking 0.027 seconds for pole position. Except for the Norisring, I can’t remember ever having seen such a close qualifying. The race, too, was highly entertaining again. We’re already looking forward to Budapest, as well as to the short breather, because the entire squad has been working extremely hard in recent weeks and months.”

“It’s been a weekend with highs and lows. Saturday with an average qualifying and only position twelve on the grid was frustrating. Then there was the mistake in qualifying with one of René’s used tires on my car. As a result, I had to start from the last position on the grid. I managed to fight back to tenth place, which was a tough battle. On Sunday, things went better in terms of the setup, ‘many thanks’ from me to Audi Sport Team Rosberg for the hard work. I managed a good lap in qualifying and was in grid position three. I had to battle my way through the race and that worked out pretty well. Celebrating two victories on the first two race weekends is great.”

“My hopes had been a little higher, but I think that on the whole we can be happy. We finished in the top five twice. Both of the qualifying sessions weren’t really ideal, but in the race we advanced nicely. I think we’re constantly learning with the new tires, the new format and the new car. I’m already looking forward to Budapest. That’s a track I think is really cool. I’m hoping for us to be able to make another step forward.”

“In terms of qualifying performance, the weekend was rather poor for me – that does bother me quite a bit. At least the two races were good. I had a few nice overtaking maneuvers, brought good points home and have hardly any scratches on the car. To sum it up: two great races following poor qualifying sessions.”

“On the whole, I’m obviously satisfied with the weekend. My first podium on Saturday was awesome and on Sunday, in position seven, I managed to score solid points again. That we’re consistently fast gives me a particularly positive feeling. Fourth and sixth in the qualifying session, plus the fastest race lap twice: we can definitely build on that for the coming races.”

“We were consistently fast throughout the weekend at the Lausitzring: always good for the top eight in qualifying and the race pace was good, too. Unfortunately, a technical issue took us out of the race on Saturday when we were heading for a top-five result. On Sunday, I had a great race as well in which I overtook a lot of cars. But then there was a mistakable radio message from race control. I understood it to mean that I should give back a position after I’d just overtaken Maxime (Martin). In order to not risk a drive-through penalty I let him pass. Afterwards, I had to overtake him again and lost a lot of time in the process. That was frustrating, but the consistency we showed here gives me a positive feeling for the future.”

“For me, personally, it’s been another difficult weekend, but at least a successful one for Audi – that obviously makes me happy. I try to concentrate on the positive things. In the first race, I set good lap times at least in my second stint and on Sunday, things went better after the pit stop as well. I posted the fourth-fastest lap time. But in total, all the things don’t fit together yet. We’re going to continue to work on that. In any case, I continue to be fully motivated and would like to battle for the top positions with the squad. Hopefully we’ll be able to do that already at Budapest.”

“After the first race on Saturday, we were pretty depressed. Nico (Müller) retired due to a brake issue and Mattias (Ekström) had to settle for position eight. And then the disappointing Formula E result in Paris on top of that. But we never give up. Sunday morning we said to ourselves: now more than ever. In his 50th DTM race, Nico finished in the points once more. With Mattias, we went for broke and called him into the pits for the tire change after just one lap. Although it kept getting warmer, it worked out. If there’s anyone who can put such a strategy on track, it’s Mattias. Simply a class act! ‘Thank you’ to the whole squad that delivered the fastest pit stops of all Audi teams on both days. The first podium this season gives all of us fresh motivation. Now we’re already looking forward to Budapest where we won both races last year.”

“I’m very happy with the weekend, especially with ‘Rocky’s’ performances. Twice we didn’t achieve the qualifying result we were shooting for, but we were always running really well in the race and our strategies, plus ‘Rocky’s’ speed, put us in position five twice. Loïc (Duval) is still struggling a little. His fastest race laps show that he’s able to do it, but he’s not delivering consistent performances yet. We need to work on that now before Budapest.”

“It’s been a great weekend for Audi Sport Team Rosberg and Audi. On Saturday, the mistake we made with the wrong tires for Jamie (Green) in qualifying was a shame. René (Rast) drove a tremendous race. Position three and his first podium. I’m happy to have René in the team. We now have two equal drivers and, as a result, are trailing the front runner in the teams’ standings by just a narrow margin. That’s huge fun. Jamie’s race on Sunday was simply a class act. I’m happy is all I can say. ‘Many thanks’ to the squad. ‘Many thanks’ to Audi for this great car. The ‘new’ DTM is simply enjoyable.”