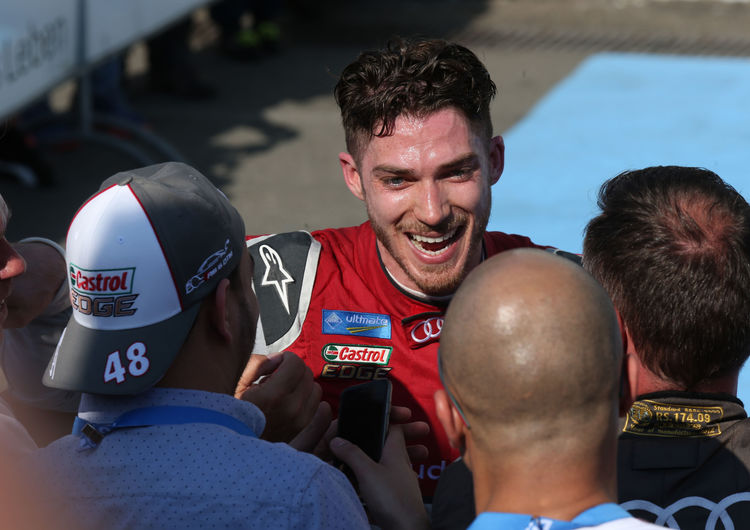 With a victory and a third place Audi Sport started the 2016 DTM. Quotes following a turbulent season opener at Hockenheim.

“It’s been a strong and successful weekend for Audi Sport – particularly Saturday. Celebrating victories in the WEC and in the DTM on the same day is something that cannot be taken for granted. So, our joy about them was all the greater. A big thank you goes to everyone involved in them. It’s a shame that things didn’t go so well on Sunday at Hockenheim in the DTM. We’re trying to understand what the reason was. But we’re already looking ahead to the next two races at Spielberg.”

“I think the spectators got their money’s worth this weekend. We saw close racing, both races were turbulent – especially on the first laps. Obviously, in terms of the results, we were a lot more pleased about the race on Saturday than the second one on Sunday. Following Edo’s (Mortara) victory and Nico’s (Müller) third place, a seventh place was a somewhat meager outcome. The main issue was that we didn’t extract the maximum in qualifying. And in the race, we lost our two best-placed cars as early as in turn three. From then on, it was clear that it would be difficult to achieve a better result. I’m very happy with Nico Müller. Following pole and his first podium yesterday, he was our best Audi today. He’s clearly on the right track.”

“It’s a shame that in a high-caliber championship like the DTM we keep experiencing things like we did today. Body contacts and accidents are good for the show – but everything has its limits. Unfortunately, there are a few complete idiots in the DTM who still believe you can win a race in the first, second or third turn. I was hit twice today – once by Tomczyk and once by Götz. I can’t understand why they got away without any penalties because they destroyed my race. That’s frustrating. My car was great and I started on a new set of tires. Even from twelfth on the grid it would definitely have been possible to finish in the top five. Be that as it may, what I take home is that we were competitive and won the first race of the season.”

“I had a good weekend: pole and podium yesterday, and points again today. That’s something you can build on. Today, the conditions following a difficult qualifying weren’t optimal. But I made up a few positions, had some nice duels and, in seventh place, scored important points. Even though this was my first race with the team, I already feel at home with ABT. It can continue like this in Spielberg as far as I’m concerned. The Red Bull Ring is a great track and should be suiting our Audi RS 5 DTM well.”

“We did a good job this weekend, but unfortunately the results didn’t reflect that. On Saturday, in qualifying, only a few tenths of a second were lacking for a better place and on Sunday we opted for the wrong strategy. There’s not a lot you can do from grid positions nine and 20 in such a hard-fought racing series. But the season is still long. There wasn’t a single driver this weekend who had two good races, so nothing’s lost yet. It was great to compete in the DTM and in the World Rallycross Championship on the same weekend. I showed that it’s possible. I was very happy that the entire Audi and ABT family backed this decision and is giving me such tremendous support. Thank you very much for that!”

“Somehow the set-up didn’t fit this weekend. Still, I made it into the top ten on Saturday in qualifying and the race, and scored a point. On Sunday, we weren’t fast enough in qualifying, plus Esteban Ocon blocked me on my fast lap. Although I had to start from the last row, points would have been possible. But then I spun into the gravel at the entrance to the pit lane. That was one of the silliest mistakes I’ve ever made. I’ll learn from it and apologize to Audi and my team.”

“It’s bitter to leave Hockenheim with just a single point. The weekend had actually started well. We were fast in free practice and in the first qualifying session. In race one, fifth place would have been possible, and I would have been happy with that. Unfortunately, though, I had a collision with Bruno Spengler. After that, my car was damaged and I was forced to retire. On Sunday, our strategy of driving only on one set of tires didn’t pan out. It was very difficult to start from position 18. That’s why more was hardly possible in race two. We weren’t able to do much with the strategy either, even though our pit stop was superb. But there are still a lot more races coming up and I already look forward to Spielberg.”

“It would be easy to say that I didn’t have a good weekend. But I learned a lot here at Hockenheim. On Saturday, I was forced to retire early following a collision. But in race two – in spite of having started from position 19 – I was soon in ninth place. But then I had a puncture and had to make an additional pit stop. My lap times afterwards were good, but more than position 13 wasn’t possible. In spite of this sobering weekend, my team wasn’t disheartened and stressed the positives. Now we intend to do better at Spielberg.”

“Our car was competitive throughout the weekend. Looking at the whole season, I’m confident that we’ll be in contention for victories. On Saturday, I was happy about Edo’s win in the opening race. For me, personally, things weren’t quite as successful. In each of the qualifying sessions, we extracted the best from the car, but in both races our chances of scoring points were thwarted. That’s particularly frustrating when you weren’t at fault in either case.”

“This was an opening weekend of the kind you don’t wish for. On Saturday, we weren’t fast enough in qualifying and in the race I retired following a collision that wasn’t my fault. Today, we had more potential in qualifying, but I made a mistake in the Motodrom. I had a good start in the race and quickly advanced from position 22 to 13th place. But then I wanted to overtake a Mercedes on the inside. That car turned in and hit me. After that, my car was no longer drivable.”

“Saturday’s race showed what’s possible. We finished in the points with all our cars and clinched victory. In contrast, the second race wasn’t optimal. A large number of collisions cost us good results. But you’ve got to bite the bullet. That’s racing. Next time, we need to try to keep our cars intact so that we can show our true performance.”

“These were two very diverse days. On Saturday, we saw dominance by Audi. We, unfortunately, were struck by misfortune – in that case, you’re only a passenger and there’s nothing you can do about it. Today, ‘Rocky’ was fast in free practice. Maybe we took a bit too much of a gamble in qualifying today by saving a set of tires for the race. We weren’t able to use the advantage the way we’d expected either. Timo (Scheider), unfortunately, became the victim of extreme driving styles. That was a real shame. A single point is a meager reward for the hard work of the team.”

“For us it was a fair to middling season opener here at Hockenheim. Unfortunately, both Jamie (Green) and Adrien (Tambay) became entangled in accidents. That’s why we weren’t able to take home any points from either race. Jamie was the fastest Audi driver in the second qualifying session. Adrien impressed with consistently good lap times in race two. In addition, his team managed the quickest pit stop. So as far as that goes, we’re at least taking some positives home from the weekend.”