Links
{{ activeItem() }}
Twitter
07/10/20
Live now: @LucasdiGrassi joins Alejandro Agag for a special edition of @campusparty #RebootTheWorld, from 11:00 CES… https://t.co/4g3Ztwpp2l
07/10/20
Good luck to all of the Audi teams this week [1/2]: 🇩🇪 NLS @vln_de at the @nuerburgring 🇮🇹 @24HSERIES #12hMonza at… https://t.co/4S3m4GGgWV
07/09/20
Testing comes to a close at @circuitspa. The next time we’re here with the Audi RS 5 DTM will be to get the 2020… https://t.co/7IlCEZMNaW
07/09/20
RT @FIAFormulaE: “If we perform at our best, we can fight for victories and hopefully the title.” Check out our article to read about how @…
Audi Sport on Twitter
{{ activeItem() }}
Facebook
06/30/20
10 races with thrills, spills, banter and more: Looking back on the first season of the RCCO #RaceHome charity racing series with our DTM factory drivers competing for a good cause. #RaceHome #AudiTogether #etron #StayHome #PerformanceIsAnAttitude #RaceAtHome
06/29/20
From the virtual RCCO #RaceHome season finale, to picking up his new ride and racing at the Green Hell – a fun week for Nico Mueller in his latest #DriversDiary. >> audi.com/DTM >> audi.com/GT3 #RaceHome #AudiTogether #etron #StayHome #PerformanceIsAnAttitude #RaceAtHome -------------------- Audi RS 6 Avant: Combined fuel consumption in l/100 km: 11,7 (20.1) – 11,5 (20.5); combined CO2 emissions in g/km: 268 (431.3) – 263 (423.3); Information on fuel consumption and CO2 emissions as well as efficiency classes in ranges depending on the tires and alloy wheel rims used. // www.audi.com/dat
06/25/20
“That was the car I really loved to drive. I felt really confident in the new A4.” Together with Mattias Ekström, we’re looking back on the era of the Audi A4 DTM – the car that scored 5 DTM drivers’ titles for us. >> audi.com/DTM #PerformanceIsAnAttitude #AudiTogether
06/24/20
The first season of the RCCO #RaceHome charity racing series is in the books. Check out our race highlights and broadcast from WeatherTech Raceway Laguna Seca: >> bit.ly/2Vb03ww #RaceHome #AudiTogether #etron #StayHome #PerformanceIsAnAttitude #RaceAtHome
Audi Sport on Facebook 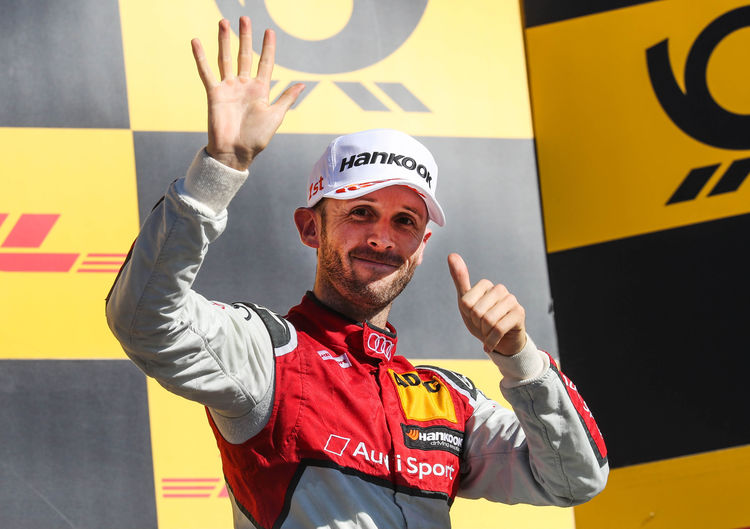 In front of an impressive crowd, René Rast won the season’s last two DTM races as well. As a result, the Audi driver, behind Gary Paffett (Mercedes-Benz), still secured a runner-up finish in the championship. With six victories in a row he is the new DTM record holder.

Dieter Gass (Head of Audi Motorsport)
“It was a fantastic close of the season for the DTM, as well as for Audi Sport with two tremendous races in front of a great crowd. I’m very proud of what we achieved this weekend. At the beginning of the season, we were out in the middle of nowhere and now we finished the season with six victories by René (Rast) in succession. And there are no regrets: We gave our all and won both races. Following the difficult start of the season, the rest was no longer in our hands. My thanks go to the entire Audi Sport squad, our teams, drivers and partners. Congratulations, obviously, to Gary (Paffett) and Mercedes-Benz as well. It’s a shame that they won’t be defending the title next year anymore. But I’m convinced that we’ll continue to see great racing in the DTM.”

René Rast (Audi Sport RS 5 DTM #33) position 1 / position 1
“An incredible weekend for me! In Saturday’s race I was running really well and fought some exciting duels with Gary (Paffett). On Sunday, I had a very good start and everything under control afterwards. In between, I only had to give some thought to tire management, but our strategy was perfect. So, no problems. Obviously, the final weekend is ending in mixed feelings for me: Reducing a 100-point deficit to only four points after a fair to middling start of the season is something I’ve never experienced in motorsport before. I think we can all be proud as a team, so today I’m celebrating my victories on a bittersweet note.”

Robin Frijns (Aral Ultimate Audi RS 5 DTM #4) position 2 / position 5
“The season was one of emotional highs and lows: Actually, we were always really strong, but I was unfortunate a couple of times and not able to give my all due to technical issues. However, whenever things were running perfectly smooth, such as in the night race at Misano or now on the final weekend, I was able to show how fast I am. In addition, our strategy worked perfectly here at Hockenheim: I pitted late in both races and afterwards was able to fully attack and overtake a lot of cars. That was really good fun.”

Nico Müller (Castrol EDGE Audi RS 5 DTM #51) position 7 / position 4
“For me, the weekend was an emotional roller coaster. I was very strong in both qualifying sessions. On Sunday, I fought back from ninth on the grid to fourth position. There I’d have liked to attempt the crucial overtaking maneuver to finish on podium, but in the end ran out of time. Still: I think our whole team can be proud of what we achieved this season and especially this weekend. A thank you also goes to the fans. The atmosphere was unique. That speaks for the DTM and makes you look forward already to the coming season.”

Loïc Duval (Audi Sport RS 5 DTM #28) position 5 / position 12
“It was a series of ups and downs, this weekend as well as throughout the season. On Saturday, I felt really comfortable in the car and finished fifth. On Sunday, unfortunately, things looked completely different again. I started the race from the penultimate grid position. If I’d been able to make up more positions right at the beginning, I might have even scored some points because, in the end, we finished just barely out of the points. But when you initially get stuck in the field for a long time it’s simply difficult. On the whole, I’m looking back on several race weekends where the racing went rather unfortunately for me. However, there were a couple of highlights, too, such as the opening event at Hockenheim, the night races at Misano or the race yesterday. I feel that, compared to last season, my form curve is definitely pointing upwards. But I’m far from being satisfied with it.”

Mike Rockenfeller (Schaeffler Audi RS 5 DTM #99) position 6 / position 11
“The finale at Hockenheim was a little disappointing for me this year. We simply weren’t fast enough. I didn’t cope well with the car. That’s a shame because I’d have liked to show more. Congratulations to Gary (Paffett) even though things became close and exciting once more in the finale. But that’s the DTM. Basically, I feel that Audi Sport can be proud of how we improved throughout the year."

Jamie Green (Hoffmann Group Audi RS 5 DTM #53) position 13 / position 16
“In the qualifying sessions, I tried to support René (Rast) and to pull him along into my slipstream – which was good for René, but obviously not for me. The races were so-so as well: On Saturday, I was simply too slow. On Sunday, things were going better, but then my front end was dented in a duel with Timo Glock. As a result, my brakes locked in the Sachs Corner and I lost valuable time. In spite of all this, I had a few good races this year and am looking forward to attacking again in the DTM next year.”

Thomas Biermaier (Team Director Audi Sport Team Abt Sportsline)
“First of all, congratulations to Gary (Paffett). A driver who’s in contention at the very front in 20 races throughout the season deserves winning. But congratulations to René (Rast) as well: Six victories in a row are definitely an outstanding achievement. I’d have never expected us to finish twice on the very top of the podium again here in the finale at Hockenheim. Robin (Frijns) and Nico (Müller) both drove two strong races here. For me, it’s the appropriate close of a fair to middling season. A finale like this one is encouraging for the following year. My thanks go to our entire team for this outstanding result.”

Ernst Moser (Team Director Audi Sport Team Phoenix)
“First of all, congratulations to René (Rast) and his team and to everyone involved in making it possible for us to keep the championship open up until the last race. At the beginning of the year, the whole lot of us did not understand the car yet. But we didn’t bury our head in the sand and continued to work hard. Therefore, congratulations to Audi Sport, to the drivers and to the teams for the great cooperation. For us, the course of the final weekend was prototypical of too many races this season: We were happy with our racing speed, but didn’t manage to nail things down in the qualifying sessions. We have to improve in that respect. Even so, I’m proud of my squad. Thank you very much to everyone, especially for the pit stops that, once again, were outstanding throughout the whole season.”

Arno Zensen (Team Director Audi Sport Team Rosberg)
“The race weekend was obviously sensational. That we were able to celebrate a total of six race victories in a row with René’s (Rast) two first places here at Hockenheim is an incredible feat. What (Head of Audi Motorsport) Dieter Gass and (DTM Project Leader) Andreas Roos still extracted from the squad following this fair to middling start of the season is unique. My thanks of course also go to my guys, but equally to Audi Sport Team Phoenix and Audi Sport Team Abt Sportsline. On the whole, this was a great team performance by everyone this season.”