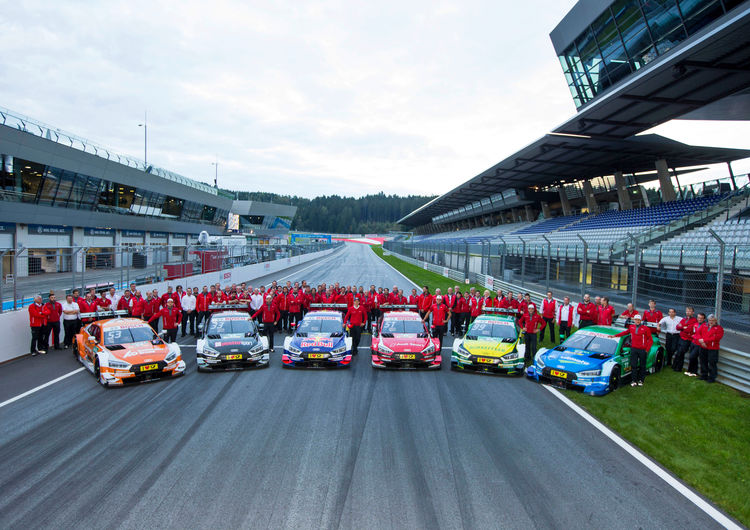 As the front runners in the drivers’, teams’ and manufacturers’ classifications, Audi will be entering the last two races of the 2017 DTM season at the Hockenheimring. Accordingly, expectations for Saturday, October 14 and Sunday, October 15 are high. Six drivers in total can still have hopes of winning the title this weekend.

Four Audi campaigners are ranked at the top of the particularly prestigious drivers’ classification before the last two rounds: Mattias Ekström (172 points), René Rast (151), Jamie Green (137) and Mike Rockenfeller (134). Marco Wittmann (BMW/134) and Lucas Auer (Mercedes-Benz/131) are still in contention for the title with Audi.

“Our car is very strong this season. We’re entering the finale with advantages in all three championships,” says Head of Audi Motorsport Dieter Gass. “Obviously, we intend not to let anyone take the trophies away from us on the finish straight. At the same time, it’s clear that nothing has been decided yet and anything is always possible in the DTM – especially this season. This is another reason why the fans can look forward to a tremendous final weekend. Hockenheim is a track that stands for action-packed events. Overtaking is possible and the circuit makes high demands on the brakes and tires. I’m expecting a close, balanced field.”

As the overall leader, Mattias Ekström from Audi Sport Team Abt Sportsline is entering the finale with the best chances. The 39-year-old Swede is the only driver who, on Saturday, may be able to clinch the title early – exactly ten years to the day following his second title win in the DTM. To do so, he would have to extend his advantage from 21 to at least 29 points.

After Klaus Ludwig and Bernd Schneider, Ekström could become the third campaigner in DTM history to win the title more than twice. “Obviously, I have an advantage,” says the 2004 and 2007 DTM Champion. “But we’re nowhere near anything having been decided yet. I have to drive a good race and am entering the finale just like any other weekend. After all, 56 points are yet to be scored.”

Ekström’s closest rival is René Rast, who is able to win the title in his first DTM season – a feat most recently achieved by Nicola Larini 24 years ago. “I can only win and actually not lose anymore, so I’m not putting any pressure on myself,” says the campaigner from Audi Sport Team Rosberg. “Who’d have thought before the season that I’d still be battling for the title in the finale? The chance still exists. A perfect weekend with two pole positions and two victories would almost be enough …”

René Rast’s teammate Jamie Green, following his misfortune at Spielberg, has a 35-point deficit to Ekström, so having nothing to lose either. For the Briton, the name of the game is: “I’m going to drive as fast as possible until I see the checkered flag on Sunday.” By contrast, Mike Rockenfeller from Audi Sport Team Phoenix, ranked fourth in the standings with a deficit of 38 points, is hardly getting his hopes up anymore of clinching his second DTM title. “For me, it would be great to still finish in the top three of the championship,” says the 2013 DTM Champion. “That’ll be hard enough. I look forward to the finale and am excited about a tremendous final weekend.”

ARD will air live coverage of both final races from Hockenheim on “Das Erste” starting on Saturday at 2:30 PM (CEST) and on Sunday starting at 3:00 PM. Tickets and fan packages are available online at www.audi.com/dtm.

#DTMFinale: Did you know that …

… Audi on the final weekend at Hockenheim has celebrated ten victories to date and been unbeaten in the DTM finale for two years?

… a “Race of Legends” will be held to say goodbye to the Audi Sport TT Cup during the DTM finale at Hockenheim and that eleven of the 15 drivers have previously been on the DTM grid for Audi?