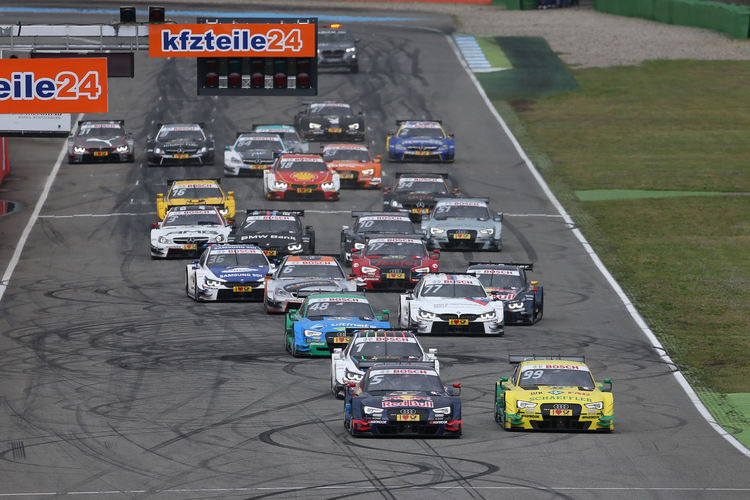 In the eagerly awaited DTM finale at the Hockenheimring on October 17 and 18, Audi’s motto will be: ‘Maximum attack!’

“We’re going to mobilize all our forces once more and battle for the championships despite the chances are minimal,” says Dieter Gass, Head of DTM at Audi Sport. “We’ve always been strong at Hockenheim – come rain or shine.”

The Audi RS 5 DTM has been unbeaten in the past three races at the Grand Prix circuit in Baden-Württemberg not far from Audi’s Neckarsulm plant. In last year’s finale at Hockenheim, the brand even notched up a one-two-three triumph. The Audi RS 5 DTM has been the DTM car to be beaten ever since, as eight wins have been celebrated by Audi in the 16 races of the 2015 season held so far. Five times victory went to BMW and three times to Mercedes-Benz.

Theoretically, Audi is still able to win the DTM manufacturers’ and drivers’ classifications under its own power at Hockenheim. However, to do so, the four rings would have to pull off a performance of similar perfection as the one in Sunday’s race at the Lausitzring when Audi finished in the top ten with seven cars.

“Realistically, we have no chance of clinching the title,” Audi driver Mattias Ekström knows. But we’ve seen a lot happening in the DTM this year. It’s great for the fans that four drivers from all three brands still have chances of clinching the title. If our rivals should be faltering, we’ll be there to grab whatever there’s up for grabs.” His brand colleague Edoardo Mortara, who scored the largest number of points of all drivers in the Hockenheim season opener and is currently the runner-up in the standings with a one point advantage over Ekström, has similar views. “Obviously, my chances of taking the title shrunk at the Nürburgring,” says the Italian. “But for me it’s great to still be in the title race for the first time in my DTM career before the last weekend. It shows me that I’ve been making progress compared with the previous years. Hockenheim has always been a track I’ve felt comfortable on. I’m hoping for a positive ending of the season and am going to battle hard.”

Dieter Gass, above all, is wishing for ‘good, high-caliber racing’ and, following the Nürburgring, would like to again confirm at Hockenheim that the RS 5 is the fastest car in the field. “There are good overtaking opportunities at Hockenheim. The performance among the three manufacturers has been very balanced in the most recent races, even when deducting the weight difference,” says Gass. “That’s why the fans can look forward to two interesting races in which we’d like to sell ourselves as best we can.”

The first of the two final races, which might already produce a decision in the title race, will begin on Saturday, October 17, at 13.30. The 18th and last race of the year will start on Sunday, October 18, at 15.15. ARD will be airing live coverage from Hockenheim starting at 13.00 and 15.00, respectively. Additional live streaming will be provided at www.dtm.com and www.bild.de. Tickets for the season finale at which the first Champion in the Audi Sport TT Cup will be celebrated as well are available online at www.audi-motorsport.com.