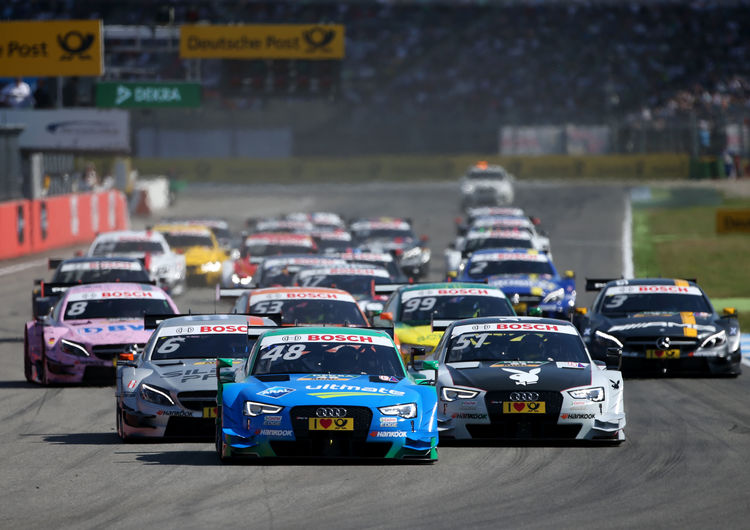 Audi Sport entered the 2016 DTM season with the ambitious aim of winning all three Championship titles. In the eagerly awaited finale at the Hockenheimring from October 14 to 16, this aim may become reality.

Before the last two races of the season, Audi is leading two of the three classifications. In the manufacturers’ standings, Audi has an advantage of 37 points over BMW and 174 over Mercedes-Benz. In the teams’ classification, Audi Sport Team Abt Sportsline’s advantage over BMW Team RMG (Marco Wittmann/Timo Glock) is 25 points. And in the drivers’ standings, Edoardo Mortara (Audi) reduced his deficit to front runner Marco Wittmann (BMW) to 14 points at Budapest on the last weekend in September.

With that, the Audi driver who lives in Geneva (Switzerland) can become DTM Champion at Hockenheim under his own steam. If he wins both races, he will be Champion. If Marco Wittmann scores no points in either race, the four-time race winner this season, Mortara, would only need a sixth and a seventh place to claim the drivers’ title. For Audi Sport, it would be the tenth in total.

“I look forward to the grand finale and am traveling to Hockenheim with optimism and full of self-confidence,” says Mortara. “We won the first race of the year there in May and should have a chance for victory in the finale as well. My Audi RS 5 DTM felt really good most recently at the Nürburgring and at Budapest. The team’s working superbly, plus the engineers and the mechanics are doing a great job. That’s how we managed to clearly reduce the gap to Marco (Wittmann) on the past two race weekends. There are only 14 points separating us. Now, we’re hoping to overtake him in the final sprint. We’re not going to give up and battle up until the end.”

Not only due to its strong performance at Budapest three weeks ago with a one-two-three-four-five-six plus a one-two result, the Audi Sport squad is showing self-confidence before the finale. The Audi RS 5 DTM has not been beaten in the season’s closing event at Hockenheim in two years. In 2014, Audi, on clinching a one-two-three result, won the title in the manufacturers’ classification. Last year, Timo Scheider won Saturday’s race. On Sunday, the podium, thanks to Jamie Green, Mattias Ekström and Edoardo Mortara, was firmly in Audi’s hands, as it had been in 2014 as well.

“Obviously, we’re going to leave no stone unturned to deliver an equally strong performance as in the past two years,” says Dieter Gass, Head of DTM at Audi Sport. “We know that our RS 5 DTM is very fast at the Hockenheimring. That makes us optimistic. Naturally, we’re also aware of all the things that can happen in a DTM finale. That we’re actually still in contention for all three titles proves that we’re looking back on a very good season. But we haven’t reached our goal yet. Everyone involved in this effort has to do a zero-defects job.”

Even at this point, it is clear that the Audi RS 5 DTM – just like last year – is the most successful car of the season. Eight of the 16 races to date have been won by Audi, four each by BMW and Mercedes-Benz. In total, the Audi RS 5 DTM has an impressive track record. From 2014 to 2016, in 44 races, 20 victories, 17 pole positions and 25 fastest race laps were achieved – most recently, even five in succession.

The DTM drivers’ tally is respectable as well. Five of the eight Audi drivers have won races this year, including all four of Audi Sport Team Abt Sportsline (Edoardo Mortara four, Mattias Ekström, Miguel Molina and Nico Müller one each), plus Jamie Green from Audi Sport Team Rosberg who, with a 39-point deficit to Marco Wittmann, still has a fighting chance of winning the drivers’ title.

For the first time in 15 years, Mattias Ekström will miss a DTM race. As the Swede will be battling at the same time for the title in the World Rallycross Championship in his Audi S1 EKS RX quattro at the Estering near Hamburg, Mike Rockenfeller will be competing in Audi Sport Team Abt Sportsline at the Hockenheim finale. Standing in for Rockenfeller, René Rast will be on the grid at Hockenheim in the Red Bull Audi RS 5 DTM for Audi Sport Team Phoenix. Rast knows Ernst Moser’s squad particularly well from numerous GT races and will therefore gel quickly with his Hockenheim DTM team. Furthermore, in preparation for the DTM finale, Rast took part in a DTM tire test following the two DTM races at the Hungaroring.

135,000 spectators traveled to Hockenheim on the final DTM weekend last year. In view of the thrilling situation in the final competition, the organizers are expecting a similarly impressive turnout this year. The finale is worth a visit also due to the attractive supporting program, which includes the title decision in the Audi Sport TT Cup and, starting at 18:30 on Saturday night, live acts such as TheBossHoss, Finn Martin and Marlon Roudette. In addition, guests at the Audi Race Lounge will get to enjoy a performance by the band Glasperlenspiel. Tickets are available online at www.audi-motorsport.com.

The first of the two final DTM races will start on Saturday (October 15) at 14:55, the last race of the season on Sunday (October 16) at 15:15. ARD will be airing live coverage from Hockenheim on Saturday from 14:30 (CEST) and on Sunday from 15:00. The two qualifying sessions can be watched on TV channel ONE on a live stream at dtm.com.