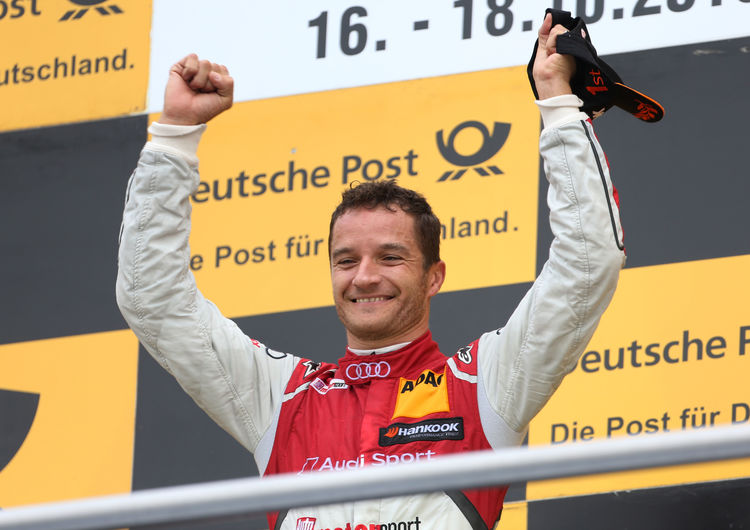 Timo Scheider is back: The 2008 and 2009 DTM Champion in the AUTO TEST Audi RS 5 DTM of Audi Sport Team Phoenix claimed a commanding win of the first of the two final DTM races at Hockenheim. For Scheider, this has been the first victory in the DTM since October 2010.

The German who lives in Austria started from the front row and on lap two overtook the BMW of Maxime Martin, the fastest driver in qualifying. Subsequently, Scheider increasingly pulled clear of his immediate rivals, drove the fastest race lap and in the end crossed the finish line with a 2.875-second advantage over Jamie Green (Hoffmann Group Audi RS 5 DTM/Audi Sport Team Rosberg).

“To finally stand at the very top again after such a difficult season is a great feeling,” the Audi driver said following the seventh triumph he has clinched in a DTM race in total. “I’m very happy about it, especially for my guys in Audi Sport Team Phoenix who, just like I, had to wait for a long time for this moment. Obviously, it’s a shame for Audi that we weren’t able to keep the title race open in the drivers’ classification.”

Following a good qualifying session, the minimal title chances of Mattias Ekström (Red Bull Audi RS 5 DTM) and Edoardo Mortara (Castrol EDGE Audi RS 5 DTM/both Audi Sport Team Abt Sportsline) remained intact. But lap one already produced the preliminary decision in the title race. Mortara had to pit following contact with another car and subsequently retired after another collision. Mattias Ekström dropped from seventh to 18th place at the start. In the duel with leader of the standings Pascal Wehrlein he was sent into a spin by Wehrlein’s brand colleague Robert Wickens on lap three. From position 20, Ekström still managed to recover to ninth place and, as a result, improved to second place again in the standings. However, the drivers’ classification went to Mercedes driver Pascal Wehrlein early.

The manufacturers’ classification, in which Audi passed Mercedes-Benz on Saturday and is trailing BMW in second place by 56 points before the final race on Sunday (from 15.00, CEST, live on ARD), remains open.

Valuable points were scored on Saturday by Jamie Green and Mike Rockenfeller. From position five on the grid, Green battled his way forward to second place and went on to complete Audi’s one-two result. In fierce duels, the Briton overtook the BMW of Maxime Martin and the Mercedes of Paul Di Resta, subsequently kept both of them at bay without DRS help, and mounted the podium again for the first time since the Lausitzring race at the end of May. Rockenfeller in the Schaeffler Audi RS 5 DTM finished in fifth place.

Nürburgring winner Miguel Molina (Teufel Audi RS 5 DTM) lost his chances of clinching a good result due to two collisions in the early stage and finished the race in position 14, barely ahead of Nico Müller (Audi Financial Services Audi RS 5 DTM). Adrien Tambay (Playboy Audi RS 5 DTM) was hit in the rear on lap one by BMW driver Bruno Spengler and forced to retire.

“We have mixed feelings,” Dieter Gass, Head of DTM at Audi Sport, said after the race. “We had the strongest car in the field once more. I’m incredibly pleased that Timo (Scheider) has found the form again that made him a two-time DTM Champion. Jamie, as well, finally wasn’t unfortunate today and showed two strong overtaking maneuvers. Obviously, it’s disappointing that our two candidates for the title lost all their chances right at the beginning. We’d have liked to keep the Championship open for the fans until tomorrow. Now we’ve still got a small chance of winning the manufacturers’ classification like we did last year. Congratulations to Pascal Wehrlein and Mercedes-Benz on winning the drivers’ title.”