Skip to content
We are using cookies for a better user experience.
08/31/20
Neuburg a. d. Donau
Sports

DTM fans back at the race track: Audi drivers looking forward to Assen 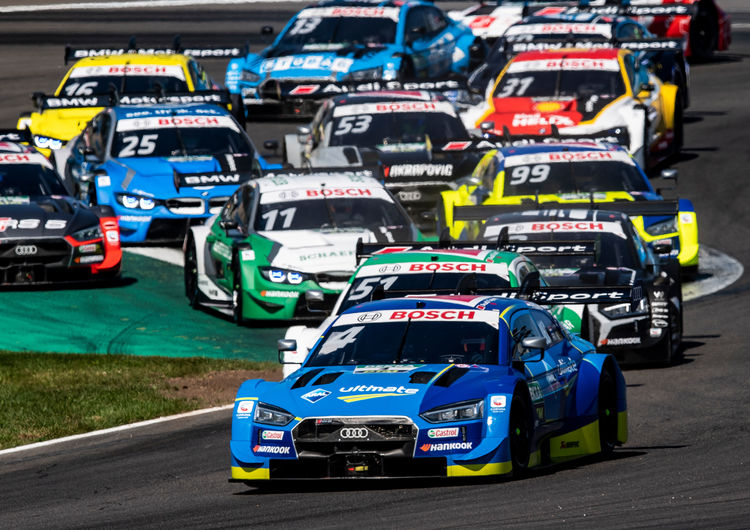 On the first weekend in September, the DTM will be racing at the famous TT Circuit in Assen (Netherlands). The circuit, which is known above all else for motorcycle racing, already thrilled the Audi drivers at its premiere last year. The anticipation for Assen is twice as great this time: It is the first opportunity that spectators will be allowed to watch DTM races live at a circuit this year.

“At last year’s premiere, Assen was immediately one of the highlights on the DTM calendar,” says Head of Audi Motorsport Dieter Gass. “The promoter did an excellent job. There were many fans on site. The atmosphere was great and both races were exciting. Even though the huge grandstands will not be as full as last year due to the strict hygiene regulations, it’s great that we are driving in front of spectators again for the first time with the DTM this year.”

The Audi drivers see things similarly. “The Netherlands has very enthusiastic fans who love racing,” says championship leader Nico Müller. “The fact that spectators can be present at the DTM for the first time this year makes the races at Assen very special for us. The DTM has been at Zandvoort for many years. With Assen, the DTM has found a great new home in the Netherlands. The track is spectacular and has a very flowing layout. In 2019, I fought for victory in both of the races. I want to do the same this year.”

Defending champion René Rast experienced two difficult races at Assen last year: In the rain on Saturday, he finished third behind Marco Wittmann (BMW) and Nico Müller. On Sunday, he enjoyed a commanding lead before a puncture caused him to drop back to ninth place. In the end, it was enough to finish fifth. “I hope things will go better this year,” says Rast. “I like fast tracks. Assen has one of the fastest corners on the calendar, which we drive at around 255 kph. The fact that 10,000 spectators are allowed at the track every day is a good sign for motorsport in general.”

The Netherlands will always have a very special significance for Rast: In 2016, he made an unexpected DTM debut at Zandvoort when Adrien Tambay was sidelined on Sunday due to an injury. The call that was to change Rast’s career came on Saturday evening. “We were celebrating my girlfriend’s 30th birthday when my mobile phone rang around nine o’clock, nine thirty,” the Audi driver recalls. “I was asked if I would like to drive in a DTM race. Of course, I accepted immediately. Fortunately, I still had my helmet in the trunk.”

Rast had never driven the Audi RS 5 DTM before and made such a good impression at his DTM debut without any preparation that he was also allowed to stand in for Mattias Ekström as a substitute at the season finale. The result: a sixth place, his first points and a clear recommendation for a full DTM season. This was followed by the title in his rookie year in 2017 and a second title in the 2019 season, as well as several DTM records.

Robin Frijns is the local hero at Assen. The Dutchman has started from pole position in four of the previous six DTM races so far this year and finally wants to celebrate his first DTM victory at Assen. “The fact that things have been going so well at the Lausitzring lately gives me confidence,” says Frijns. “The Lausitzring has never been particularly good for me. Assen, on the other hand, is exactly my thing, even though I had bad luck there last year. The track is very fluid, comparable to Spa. It’s hard on the tires, but we have a lot of experience in this respect. It’s great that fans are allowed to be there. It’s very strange when you’re on the grid and it’s very quiet, because there are no fans.”

Loïc Duval, Jamie Green and Mike Rockenfeller are also looking forward to the two DTM races at the “Cathedral of Speed.” Rockenfeller won last year’s Sunday race at Assen, where tire management played a decisive role. “We’re not used to driving in front of fans anymore,” says Rockenfeller. “I hope everything works out well and the fans will create a nice atmosphere.”

Teammate Loïc Duval also raves about the “cool, fluid” track. “Last year, it was uncharted territory for all of us,” says the Frenchman. “This year, we know more. I am really looking forward to Assen and the Netherlands. This country loves motorsport.”

Jamie Green had two difficult qualifying sessions last year. “In the rain on Saturday, I was able to work my way up to the front,” says the Briton, who is one of eight Audi drivers who have already won a DTM race in the Netherlands: In 2016, Green won Sunday’s race at Zandvoort, one of his absolute favorite tracks.

Mattias Ekström is the most successful Audi driver in DTM races in the Netherlands with four victories. The Swede also celebrated his first victory in the DTM at Zandvoort in 2002. On the same day, Laurent Aiello won the DTM title in the Abt-Audi TT-R, although he had to start the race from last place on the grid. Audi celebrated a total of eleven victories at Zandvoort from 2002 to 2018.

“Audi was very successful at Zandvoort,” says Head of Audi Motorsport Dieter Gass. “We were able to build on this success at Assen last year. We saw that the track is extremely tough for the tires. That’s what we will focus on during the preparation.”

The two DTM races at Assen will start on Saturday and Sunday at the usual time at 1.30 PM CEST. SAT.1 will broadcast live from Assen on both days from 1 PM CEST.