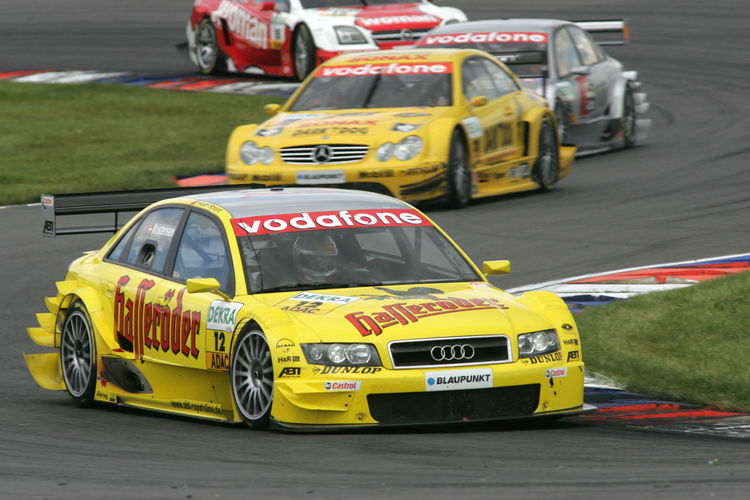 A best time set by Audi marked the start to the DTM weekend at the EuroSpeedway Lausitz. Right at the beginning on Friday morning, Adria winner Mattias Ekström in his Audi A4 DTM set a time that was not matched by anyone else throughout the first test session. Audi drivers Tom Kristensen, Emanuele Pirro and Martin Tomczyk followed, taking second, fourth and fifth places respectively. In the second test run in the afternoon, which Ekström again finished as the best of the Audi drivers’ squad, the Audi teams primarily focused on the cars’ setup for the race.

Mattias Ekström (Audi Sport Team Abt / Audi A4 DTM #5)
1st / 7th, 1m 39.687s (58 laps)
“This will be a tough weekend. Our competitors are very quick, and there’s quite a colourful mix of Audi, Opel and Mercedes at the front of the field. We’ve worked out an optimum setup for the race, and tomorrow morning, we’ll have to do some more work to prepare for the qualifying.“

Tom Kristensen (Audi Sport Team Abt Sportsline / Audi A4 DTM #12)
2nd / 10th, 1m 40.166s (61 laps)
“This is my first stint at the Eurospeedway, and I find the circuit absolutely impressive. Driving through the pit lane past the huge grandstands immediately makes you think of Indianapolis. The circuit, though, is very hard to come to grips with, as there’s really just one racing line and the track on either side of it is very dirty. Still, my A4 was very fast right from the start.“

Emanuele Pirro (Audi Sport Infineon Team Joest / Audi A4 DTM #44)
4th / 12th, 1m 40.312s (65 laps)
“Though it’s new to me, I immediately felt comfortable on this circuit and have an overall positive feeling this weekend. This morning, we made some good progress with the A4 and in the end clinched fourth place. In the afternoon, we tried a few things that didn’t work out so well, though.”

Martin Tomczyk (Audi Sport Team Abt / Audi A4 DTM #6)
5th / 9th, 1m 40.421s (50 laps)
“I got along very well today. We were also satisfied with the long run in preparation for the race. Unfortunately, with my new tyres I didn’t clock the times I’d wanted to – but the qualifying isn’t until tomorrow.”

Christian Abt (Audi Sport Team Abt Sportsline / Audi A4 DTM #11)
13th / 14th, 1m 40.466s (57 laps)
“We’ve acquired a lot of data today and have made quite a few strides with our setup. At the EuroSpeedway, even the smallest mistake will cost you enormous time, that’s why everything has to fit perfectly in tomorrow’s qualifying – and we’re headed in the right direction.”

Frank Biela (Audi Sport Infineon Team Joest / Audi A4 DTM #45)
18th / 17th, 1m 40.939s (60 laps)
“The circuit is anything but easy. In the fast corners, like Turns 1, 2 and 3, the car’s balance must be one hundred per cent right, if not, you lose a lot of time. That’s what we worked on today. With used tyres, things were going quite well for me, but with new ones I wasn’t able to improve all that much. That has to change tomorrow.“

Hans-Jürgen Abt (Team Director Audi Sport Team Abt Sportsline): “Generally speaking, we can be satisfied with both tests. Particularly the first one went very well for us. The time Mattias clocked in the morning is certainly respectable. In the afternoon, we tried out a number of things and are now well set for tomorrow.”

Ralf Jüttner (Technical Director Audi Sport Infineon Team Joest): “With Emanuele, in the morning, things went exactly the way you’d like to see them: we improved the car step by step, and in the end, were rewarded by a good result. In the afternoon, he did a long run. On Frank’s car, just before the end of the first test, there was a short circuit in the main switch, that’s why he wasn’t able to take out a new set of tyres in the morning. The qualifying will be tough, but our goal continues to be among the top ten.“

Dr Wolfgang Ullrich (Head of Audi Motorsport): “We tried out various downforce versions today and gained some very valuable findings for tomorrow. The long runs, as well, produced pretty decent results. We implemented the things we’d planned. Although the results of the first test session looked better for us than those of the second, one shouldn’t overestimate these times.”