DTM countdown: Mike Rockenfeller – the only way is up 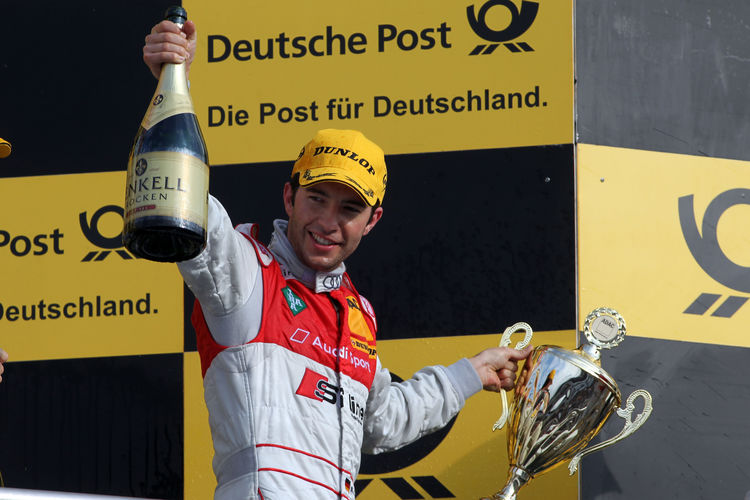 The 2011 motorsport season starts under new circumstances for Mike Rockenfeller. The 27-year old Audi factory driver moves to Audi Sport Team Abt Sportsline and drives the latest evolution of the A4 DTM (“R14 plus”) for the first time. He also contests a sportscar program in parallel with the R15 TDI and the R18 as well as the Nürburgring 24 Hours. Sixteen race weekends and also the Le Mans test day are on his calendar this year.

When Mike Rockenfeller moved to Audi in 2007 and stepped into the DTM the direction was clear. “Everybody works towards the goal of driving a new car and to be able to fight at the top as a result,” admits the native Rheinlander. Things took a little longer however – four years to be precise. Just as Timo Scheider in 2007 and Oliver Jarvis in 2010 were promoted to a current cockpit at Audi, Mike Rockenfeller now gets his chance with the latest machinery and equipment by changing to the team around Hans-Jürgen Abt.

Last year the budding talent finally qualified for the next step of his career: He concluded the season in seventh position as best Audi ‘used car’ driver in the DTM – and, in doing so, left three drivers from Audi Sport Team Abt Sportsline in his wake. A podium finish at Hockenheim rounded off the 2010 DTM season, and after winning the 24 Hours of Le Mans a lifelong ambition was fulfilled early on in his young career.

“It was an important step for me to be able to fight for the top positions in the DTM with the latest car,” stresses professional racing driver with residence in Altnau on the Swiss shores of Lake Constance. “In particular with a view to 2012 when everybody starts with new material and another manufacturer also joins the DTM, 2011 is important as a preparation season.” That the pressure to perform increases after fulfilling his dream of promotion does not trouble the self-confident driver in the slightest: “It’s a great opportunity that Head of Audi Motorsport Dr. Wolfgang Ullrich is giving me, and I aim to prove that I have earned it and can get good results.”

The step is, however, no walk in the park. “I’ve known the DTM and Audi family now for four year, but there is also plenty to learn,” knows ‘Rocky’. “I race for the first time for Hans-Jürgen Abt’s team, work together with Dominik Quosdorf – a new engineer to me – and we all receive tires from our new partner Hankook. I won’t be setting my sights too high for exactly these reasons in 2011. But under no circumstances is it just a learning season. Results must plain to see.”

As if the demands in the DTM were not already enough, the young talent also contests a sportscar program for Audi in parallel – for the fifth year in succession. After winning the Le Mans Series title in 2008 and taking victory in the 24 Hours of Le Mans in 2010, there are now three sportscar events in his calendar: the 12 Hours of Sebring in the Audi R15, the 1000 kilometers at Spa-Francorchamps as well as the 24 Hours of Le Mans with the new Audi R18. “I think my past results have demonstrated that this double program helps me and isn’t actually a hinderance,” does not actually hinder me,” emphasizes the versatile professional race driver.

As a result, one thing is very clear for Mike Rockenfeller at the start of his fifth racing season with Audi: “For many racing drivers Formula 1 may well be the greatest dream at a certain stage of their careers, for some, however, this dream ends in back-of-the-grid teams or with their careers stagnating. Quite honestly, what could possibly be better than contesting the DTM for a brand like Audi and to defend the title at Le Mans? My decision for Audi was perfect, and you can’t experience greater prestige than with this double program. I’m very, very happy with what Audi has made possible for me.”