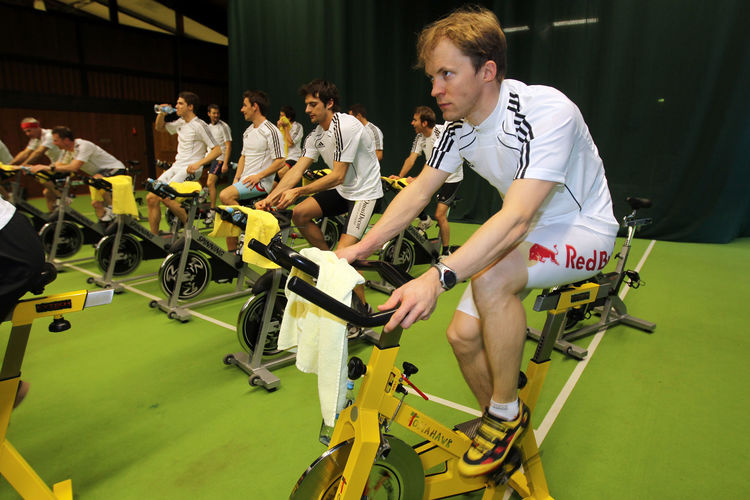 One man is particularly happy that the new DTM season starts relatively late: Mattias Ekström (32). The Audi factory driver broke his left wrist in a sport accident in the middle of February. As a result a race against time began for the two-time DTM Champion, since the Swede aims to be sitting at the wheel of his Audi A4 DTM when the season opens on May 1 at Hockenheim.

The injury happened on the penultimate day of the Audi Winter Camp at the Sonnenalp in Ofterschwang. “When I was making a smash while playing volleyball I ended up rotating onto my back,” explains Ekström. “On the way down I put my left hand out – and when I hit the ground I knew immediately that something was wrong. It felt like 2000 volts pulsing through the hand.”

The diagnosis: a hairline fracture of the radius in the left wrist. The result: Four weeks cast, followed by four weeks rehab. If everything runs according to plan Ekström can sit in his race car again shortly before Hockenheim. The DTM star had to cancel his planned participation in the famous “Vasaloppet” cross country skiing event in Sweden. “I’d never been in such good form and would have certainly set a new best time…”

That he had trained so much after his tonsil operation in December can only be of benefit for Ekström on his way back into the race car as the plaster cast on the left hand does not only restrict daily life, but also the fitness plan. Pedaling on the ergometer and gymnastics are also possible with an injured hand. Apart from that, however, the left hand needs one thing in particular at the moment: lots of rest. “It isn’t painful anymore and there’s hardly any pressure from the cast,” says the DTM Champion from 2004 and 2007. “But this isn’t just a good sign: It also shows just how quickly the hand is losing muscle mass.” To build this up again and to train will be the main task as soon as the cast is removed. This is particularly important for the left-right movement on the Audi A4 DTM steering wheel.

The Audi driver receives medical care in the Swiss Olympic Medical Center “Move Med” in Zürich, which specializes in sport accidents. “I’m in excellent hands here,” says Ekström. “They are familiar with such injuries from other professional athletes and make a very professional impression.” They give the Swede prospect that he will be completely fit and ready to race in good time for Hockenheim.”

He is not at all concerned that he must miss a few tests: “Of course it would be good to have a few more kilometers under my belt, especially with the new Hankook tires. However, when I was still a complete novice in the DTM I wasn’t able to test so much. So, it’s a little like ‘back to the roots’.”

His goal also remains unchanged: If he has anything to do with it he aims to be the one to bring the DTM title back to Ingolstadt and Neckarsulm at the end of the season. “Nothing has changed – I’m still completely motivated and ambitious, even though I’ve been in the DTM so long,” he says. “I aim to and I will give 100 per cent in every race to be able to say at the end of the season: my performance was top. Whether or not this was enough to be champion remains to be seen – but this is obviously the target.”