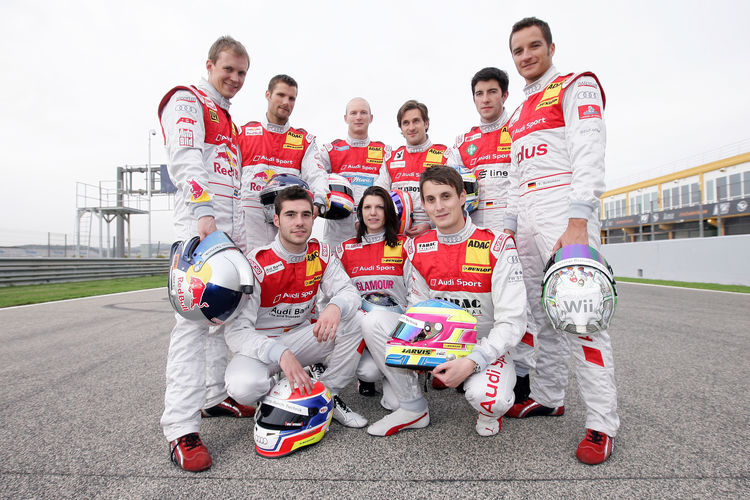 Audi will present itself to the general public with an impressive line-up and activities galore at the DTM presentation in Wiesbaden on April 18. In the capital of the state of Hesse Audi will promote Europe’s most popular touring car series that starts at Hockenheim a week later with all nine Audi “factory” drivers, Head of Audi Motorsport Dr. Wolfgang Ullrich, four Audi A4 DTM cars, an Audi R8 V10 and a car parade.

The presentation along Wilhelmstrasse promises to deliver a diverse rhythm of speed, skill and music. Three Audi A4 DTM cars sporting the colors of the partners GW:plus/Top Service, Red Bull and Tabac Original can be witnessed during race taxi runs. In addition, Timo Scheider’s 2009 championship-winning car will be showcased in front of the “Kurhaus” in Wiesbaden. Another fascinating Audi model to be marveled at will be the high-performance V10 version of the Audi R8 with a power output of 386 kW that will do its laps as a safety car around the blocked off course.

Starting at 4:05 p.m., fans will be in for a particular thrill when the teams show their sporting prowess in pit stop demonstrations, aiming to change all four wheels of the Audi A4 DTM in less than four seconds like in real racing events. A stunt show, autograph sessions and rounds of interviews with all drivers, a parade of current Audi vehicles and musical performances by Jennifer Braun, Doro Pesch and Aura Dione will complement the event.

Just a week later, on April 25, the title defense project will start for Audi: after the championship wins with Mattias Ekström (in 2007) and Timo Scheider (in 2008 and 2009) Audi wants to bring the DTM trophy home to Ingolstadt and Neckarsulm for the fourth consecutive time.

Quotes by the Audi drivers on the DTM presentation in Wiesbaden

Timo Scheider (GW:plus/Top Service Audi A4 DTM #1)
“I’ve been to many cities with the DTM, from Berlin via Rust and Hamburg to Düsseldorf. It’s a hallmark of the series to keep organizing new things because standing still means stepping backwards. That we’re starting in Wiesbaden, the state capital of Hesse and headquarters of the ITR, is only logical. It’s great to have the chance to present myself as champion with Audi to a new audience. I hope the fans in Wiesbaden will respond to this offering as enthusiastically as all the other fans did before them.”

Oliver Jarvis (Tabac Original Audi A4 DTM #2)
“This year our season starts in Wiesbaden. The idea is typical for the DTM but rather unusual in my own career in which I’ve never experienced such events before my time with Audi: it’s fantastic to develop such a great show and to present the series in a big city in front of tens of thousands of fans. It’ll be a really spectacular event and I’m sure that there are a lot of racing series that envy us for this. I hope that a large audience will greet us and that we’ll really pick up momentum here because a week later we’ll start racing at Hockenheim.”

Mattias Ekström (Red Bull Audi A4 DTM #5)
“It’s always a fantastic experience when the DTM gives the fans and us this opportunity of a ‘warm-up’ before the season starts. I’m really looking forward to Wiesbaden. I truly enjoy being in touch with our fans. The atmosphere at the presentation is more relaxing than on a race weekend. I’m sure it’ll be another great event. With the pit stop demonstrations and our taxi runs we’re offering the fans a program that really lets them cheer us on.”

Martin Tomczyk (Red Bull Cola Audi A4 DTM #6)
“For more than one day, Wiesbaden will be totally transformed. Fans can experience all the fascination of the DTM right in the heart of the city: race cars driving in the streets, a stunt show, musical performances, autograph sessions, interviews – I can’t think of any other racing series that does that. I’m wishing for a really large turnout of fans at the presentation, nice weather and a fascinating day for all of us.”

Alexandre Prémat (TV Movie Audi A4 DTM #9)
“The DTM has a huge base of fans and every driver has their own group of fans. It’s always a great experience every year to be greeted by so many people before the start of the season. I truly enjoy that and am sure that I’ll be signing a lot of autographs again this year in Wiesbaden. The presentation shows what a gigantic event the DTM is. It’s an action-packed day and everyone can get a close-up experience of the cars and the drivers. That’s simply the way motorsport should be.”

Mike Rockenfeller (S line Audi A4 DTM #10)
“The DTM goes all out to offer its loyal spectators a great experience every year. This doesn’t just mean on the race track. The presentation is only one example – and a very impressive one too. I’m looking forward to this event in Wiesbaden such a short time before the start of the season. It’s really great to find even more time for the spectators away from the hectic trackside conditions. The close contact between the drivers and the fans, the fact that they’re in touch with us racers and our sport is not just a promotional message but truly a hallmark of the DTM.”

Markus Winkelhock (Playboy Audi A4 DTM #14)
“The DTM presentation is something very special. You can tell that just by the way the public has responded to this event in the past. Now we’re in the capital of Hesse, Wiesbaden, for the first time. It would be great if we managed to thrill as many spectators there as we did before in Düsseldorf. And if that inspired even more fans to come to Hockenheim, my personal home race, just a 100 kilometers further south that would be even greater!”

Katherine Legge (Glamour Audi A4 DTM #15)
“For the first time we’re presenting ourselves with the DTM in Wiesbaden. Even in previous years the presentation was a really great event and it’s guaranteed to be excellent again this year. One of the factors that make the DTM so successful is its large turnout of fans in the grandstands as well as in front of TV sets. That we appear in big cities like Wiesbaden gives us a wonderful opportunity to pay the fans back for their enthusiasm. They come to see us at the circuits and once a year we come to see them in a city. And by the way: for us it’s also a sort of home round because Audi Sport Team Rosberg’s home base is just 100 kilometers away.”

Miguel Molina (Audi Bank A4 DTM #18)
“For me, everything is new. I’ve heard a lot about the DTM presentation even though I don’t know it yet from personal experience. I was overwhelmed when I heard that last year more then 200,000 fans turned out for the presentation. That’s hard to believe if you’ve never been there yourself, and it shows the incredible backing which the DTM has in Germany. After the tests, Wiesbaden will give me my first impressions of the DTM in Germany. And I’ll do everything within my means this year to make people in Spain more aware of the DTM as well.”