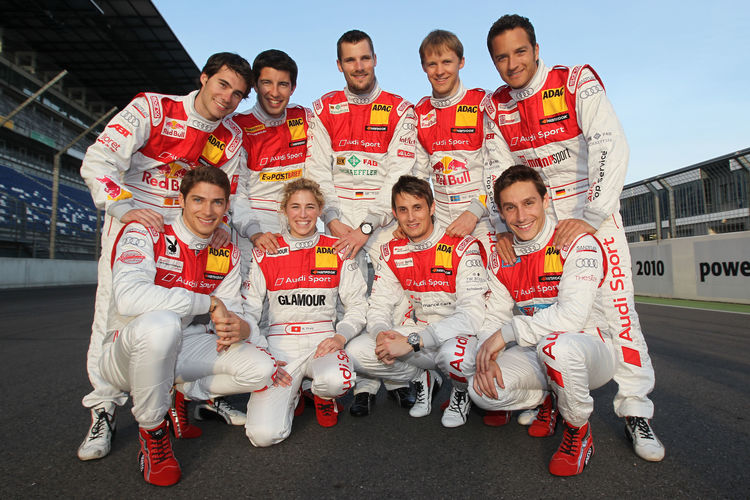 Still another three weeks before the season starts and Europe’s most popular touring car race series introduces itself unusually early in Wiesbaden to the spectators. For the newly formed DTM driver squad it is the first common public appearance.

Last year 110,000 fans enjoyed the DTM presentation in Wiesbaden. Even more spectators are expected to the second edition held on Sunday, April 10 from midday to 6:00 p.m. between Wilhelmstraße and the Kurhaus. All nine Audi DTM drivers are in Wiesbaden. In addition, Audi, DTM Champions in 2007, 2008 and 2009, has a great deal to offer fans.

Two Audi A4 DTM cars bring the purest DTM feeling to the streets by entertaining the public with demonstration laps and doughnuts along the Wilhelmstraße. On the grid are Timo Scheider’s AUTO TEST Audi A4 DTM and the Red Bull Audi A4 DTM of Mattias Ekström. Also to be seen and admired on the improvised circuit: the Audi RS 5 safety car from the DTM. Furthermore, the spectators get to see three other A4 DTM cars: Mike Rockenfeller’s E Post Brief Audi A4 DTM, the Audi Performance A4 DTM of Oliver Jarvis and Rahel Frey’s Glamour Audi A4 DTM can be admired at the exhibition area in front of the Wiesbaden Kurhaus.

Audi Sport Team Abt Sportsline’s real DTM pit crew gives the fans plenty to enjoy: The fans can look on in awe as changing four wheels is completed in little more than three seconds. The Audi collection Truck provides fans with the opportunity to equip themselves in good time for the season opener at Hockenheim with accessories from the Audi collection and to get their goods signed directly by the Audi factory drivers. Last but not least: An Audi parade is never far away at a DTM presentation.

Comments by the Audi drivers before the DTM presentation

Filipe Albuquerque: “Even though I don’t know this event I’m quite excited about it. Wiesbaden looks wonderful on the photographs. The number of people at the presentation is unbelievable. It will be my first acquaintance with the DTM fans. I already know the other Audi drivers from the winter camp. In Wiesbaden I’ll also get to know our opponents.”

Mattias Ekström: “The presentation is something very special for me. We can really spend much more time with the fans than we can at the races since there is no hectic schedule in Wiesbaden. The fans are always positive and they are all happy that the season is literally just around the corner. I hope the weather is good as it is a necessity for a great atmosphere.”

Rahel Frey: “I only heard about the event last year from the media. The crowds must have been enormous. Previously in motorsport I’ve only experienced a really important presentation at Le Mans. I imagine that there will be a similar public onrush in Wiesbaden. The fans can rub shoulders with the drivers. It will certainly be a great event. I’ll introduce myself for the first time to the public there and also be accepted as DTM driver at the same time.”

Oliver Jarvis: “Wiesbaden was such an amazing event last year that I can hardly wait to be there again and to appear with the DTM. I was in Wiesbaden for the first time last year during the presentation. The city is beautiful and the atmosphere was fantastic. I was lucky enough to be able to drive a show car last year. It was a lot of fun to drive around immediately in front of the spectators. For us it’s also a great opportunity to meet the fans and sign autographs in far more relaxing environment than during a race weekend.”

Miguel Molina: “Wiesbaden was an unusual experience a year ago. Such an enormous amount of people at a presentation before the season starts – I’ve never seen anything like it. Impressive! As I used to collect autographs from racing drivers myself as a small boy, I really like this relaxed atmosphere to meet the people and to sign autographs before the first race. The presentation is quite simply a wonderful idea and Wiesbaden is a great city for this.”

Edoardo Mortara: “It’s a fabulous idea by the ITR to organize such an event. I really like the idea behind it that the DTM is presented to the public in a city center. This is also an aspect that makes our sport a little more interesting, because when all is said and done we do actually drive for the fans. We represent automobile manufacturers and we can be very grateful that people like our sport and support both us and the car companies.”

Mike Rockenfeller: “The DTM presentation is a very special event to which I enjoy visiting as much as the races. There is a relaxed atmosphere, you see everybody else, the drivers are relaxed with one another and the same applies to the contact with the many fans. It’s always great to use this opportunity and to be in the right frame of mind for it. We can take care of the fans. I’m really appreciative that so many of them come to the presentation.”

Timo Scheider: “Wiesbaden is a unique start to the season. Everybody is already highly motivated and you get an indication of what to expect. There hasn’t been any contact with fans for months. Now we can sign autographs in a relaxing atmosphere which is a great thing. It’s just cool to be there. The fact that 110,000 fans came last year proves just how popular the DTM is and just how the fans around Wiesbaden can be motivated for such a thing. It’s great that this event is so well received. It also says a lot about the DTM’s importance among sport fans.”

Martin Tomczyk: “The DTM presentation is generally a great event, and last year Wiesbaden in particular showed that it was in fact a fantastic event. The weather played along and there were loads of people there. For everybody concerned this event now rings in the DTM season, and it will also be the case this year. I’m looking forward to seeing all the faces again and to enjoy the entire event in a relaxed atmosphere.”