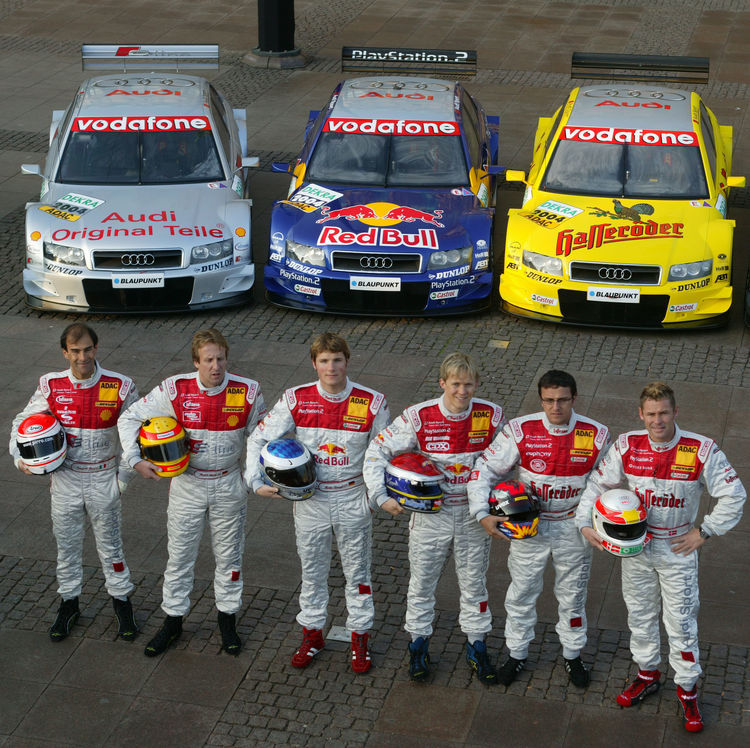 Motorsport fans can hardly wait for the start of the DTM (German Touring Car Masters): More than 45,000 tickets for the Motodrom at Hockenheim are already sold, and well over 100,000 spectators are expected to attend during the weekend. The six newly developed Audi A4 DTM cars, with which AUDI AG takes on the competition this year as a factory team, number among the star players around the 4.574 kilometre long circuit.

In the meantime, the six race cars are completely built up and in the hands of the Audi Sport Team Abt Sportsline and Audi Sport Infineon Team Joest race teams following a comprehensive test programme at various European circuits. This season the Audi factory drivers Frank Biela, Tom Kristensen and Emanuele Pirro line up in the team alongside DTM regulars Christian Abt, Mattias Ekström and Martin Tomczyk.

The season opener in Hockenheim is the works comeback for Audi after almost a ten year pause from the DTM. Already in 1990 and 1991 Hans-Joachim Stuck and Frank Biela brought the title of Europe’s most popular touring car series back to Ingolstadt. Laurent Aiello, in the privately entered Abt-Audi TT-R, added himself as third Audi driver to the DTM hall of fame in 2002.

Mattias Ekström (Audi Sport Team Abt Audi A4 DTM #5): “This season with Audi is a very special one for me, as it is the first year in my career that I start as official works driver. We have done everything possible during the preparations. Now the timing screen in Hockenheim will tell us exactly how good we are compared to the competition.”

Martin Tomczyk (Audi Sport Team Abt Audi A4 DTM #6): “I want to continue in Hockenheim exactly as I finished off there last year, and that is to qualify in a good position for the race. We start a new chapter in the DTM with the Audi A4, that’s why no one knows exactly how the balance of power lies. However, the first goal is obviously to find a good position within the team.”

Christian Abt (Audi Sport Team Abt Sportsline Audi A4 DTM #11): “At the Brno test, I simulated two complete race weekends on a single day, driving a total of 110 laps – that increased my craving for the DTM in more. I trained hard in winter, Audi have built a fantastic car – it´s time that our transporters set off for Hockenheim.”

Tom Kristensen (Audi Sport Team Abt Sportsline Audi A4 DTM #12): “The anticipation for Hockenheim is massive. As DTM rookie I obviously have a lot to learn, but in spite of this I have set myself some ambitious goals: I definitely want to qualify for the Super Pole, which will give me confidence. My preparations were ideal, I’m ready for it.”

Emanuele Pirro (Audi Sport Infineon Team Joest Audi A4 DTM #44): “The moment of truth has finally arrived. I can hardly wait till first practice starts at Hockenheim. The winter was very long, but now the season finally starts. I’m convinced that in the Audi A4 DTM we have a very good car. I have two goals for the first race: firstly to reach the finish, secondly as close as possible to the front. I believe that every point will count in the 2004 DTM.”

Hans-Jürgen Abt (Team Director Audi Sport Team Abt Sportsline): “My team has prepared intensely and is highly motivated. Every single mechanic knows exactly what the story is this year. In the A4 DTM, Audi has developed a spectacular new car – we will therefore do everything within our power so that it can be added as soon as possible to the DTM winners’ list. I’m absolutely sure that the DTM is about to enter its most exiting and successful year. The fantastic number of advanced ticket sales for the Hockenheim race shows that the fans can also hardly wait.”

Ralf Jüttner (Technical Director Audi Sport Infineon Team Joest): “Obviously I would have preferred if we had had a little more time before the first race. But this is always the case for all teams just before the season starts. We had two very good tests at Estoril and Brno with the Audi A4 DTM, at which we learnt a great deal about the new car. As newcomer, at Hockenheim it will be important for us to get a feeling for the procedures of the new DTM. We will try to make sure that the weekend runs smoothly and that our pit stops are trouble free. Achieving this will give us something to build on for the rest of the season.”

Dr Wolfgang Ullrich (Head of Audi Motorsport): “After the intensive preparations, we are now looking forward to the season finally getting under way. We are convinced that Hockenheim will be a fabulous event. More tickets have been sold in advance than ever before. We expect a full house and a corresponding number of enthusiastic Audi fans. Our goal is, not to disappoint our fans and to give a got account of ourselves in the new DTM. The pre-season tests showed that all three manufacturers are at a very similar level. The DTM fans can look forward to an exiting race.”