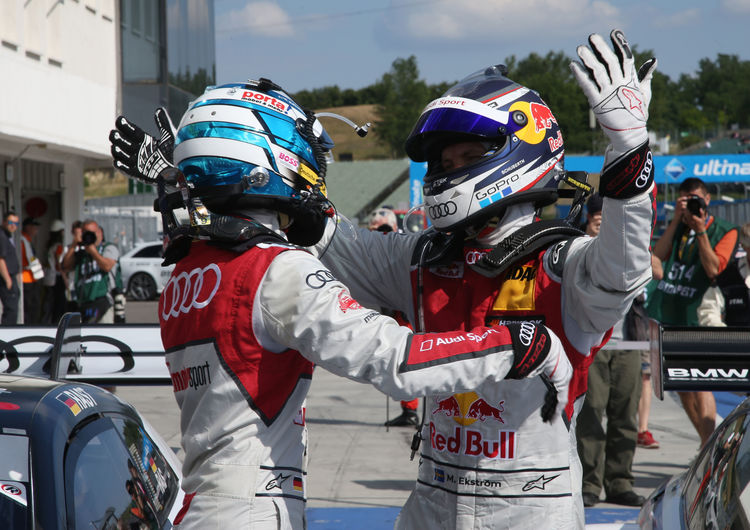 At the Hungaroring, in front of 39,500 spectators (throughout the weekend), René Rast celebrated his first DTM victory. Mattias Ekström, in second place on Sunday, completed the strong performance of the new Audi RS 5 DTM in its first foreign round. Quotes from the Audi camp.

“The DTM weekend felt like an extremely long one, with ups and downs. On Saturday, after a great qualifying and a good start, we didn’t respond quickly enough when the first cars pitted early. Then the safety car was deployed and instead of a victory we had to settle only for positions four to six. That was extremely frustrating and still hurts, which made it all the more important for us to strike back on Sunday. The second race was fantastic for Audi, but we’d actually been planning for such a result on both days. For René Rast I’m incredibly happy: he’s been delivering an awesome debut season in the DTM.”

“It was a near-perfect weekend. ‘Near’ because I was on pole position twice, but on podium ‘only’ once. On Saturday, a better result would no doubt have been possible. But you’ve got no control over when the safety car comes out. Otherwise, on Saturday, we’d have been able to achieve a similar result as on Sunday. But, obviously, I’m mega happy about my first victory. Before the weekend, the thought of leaving here as the championship leader didn’t cross my mind.”

“The weekend was difficult. Seventh place on Saturday was okay. We made somewhat of a wrong choice in strategy and were affected by the early safety car period. After the race, I was disqualified. Now we need to wait and see if I’ll get back the points. At the end of qualifying on Sunday, I didn’t manage a good lap, which made the race difficult. I was able to overtake two cars and had a good race, but a poor pit stop. It was a weekend with ups and downs.”

“I’m satisfied with my performance in qualifying and my race pace. My start on Saturday was pretty good but, unfortunately, less than perfect on Sunday. On the whole, though, we made a big step forwards and I’m very happy with this weekend.”

“The weekend wasn’t as great as expected. I think we could easily have clinched two top-five results because qualifying was pretty good. The race on Sunday cost many points. We had an issue before the start and, to make things worse, the stop went wrong too. We’ve been in the points six times, but the season is still long. We expect to be winning races again and then we’ll be in front again too.”

“Following a great start on Sunday, we were actually aiming for a podium. But Mattias (Ekström) played his cards well and our strategy didn’t quite pan out. That’s why we dropped from second place back to fourth. The BMW that still snuck up from behind bugs me a little. A podium would no doubt have been nice, but we don’t mind taking home the points for fourth place. Sunday was a good day and Saturday a little less so.”

“The weekend started pretty well. On Saturday, we were inside the performance window. Seventh place in qualifying was promising. However, due to the safety car, the race didn’t go according to plan and we lost some ground. I was in the points on the last lap, but then had slight contact with Marco Wittmann, had a puncture and dropped out of the points. On Sunday, we were struggling with performance again. Qualifying wasn’t good. There wasn’t much I could do in the race. It was a mixed weekend, but I believe my learning curve in the DTM is pointing upwards. I’m looking forward to the next race.”

“Sunday was clearly more to our liking than Saturday which, on the whole, turned out to be a great disappointment for Audi after the strong qualifying. We scored 43 points this weekend, had both cars on the second row of the grid and in the points in both races. The pit stops were perfect too. Nico (Müller) was very unfortunate on Saturday after the restart and on Sunday just barely missed a podium. We were obviously hoping for Mattias (Ekström) to bring his lead home. But René (Rast) on fresher tires was simply too strong in the end and clinched a deserved victory. Congratulations to him! Last year at Budapest, he was still a guest in our garage – and now he’s the DTM front runner himself. Well done! Now we’re looking forward to our home round in Nuremberg where Mattias is always a safe bet and Nico celebrated his first DTM victory.”

“As expected, Audi was really strong here at Budapest. Audi is in the top spot in all championships – obviously, that’s fantastic. Things were going really well for us on Saturday too. ‘Rocky’ might have clinched victory. But the early safety car period ruined our strategy. Loïc (Duval) had his best qualifying so far in the DTM on Saturday and was in contention for points in the race. It’s a shame that his efforts went unrewarded due to the collision with Marco Wittmann on the last lap. On Sunday, we weren’t able to score a lot on the whole. Loïc was unfortunate again with a collision on the final laps. ‘Rocky’ would again have started the race from position five but, due to a leaking brake line, had to start all the way from the rear. He delivered another fantastic comeback and, without traffic, could have ended up even more forwards. Still, with a 16-point deficit, he continues to be in contention for the title.”

“This weekend was an emotional roller coaster. The front row on Saturday, followed by the disastrous race and the disqualification. On Sunday, both drivers were very strong. That René (Rast) as a rookie wins his first race in the third event and leads the championship is simply sensational. Jamie (Green) drove a tremendous race too and powerfully overtook other cars. We’re leading the teams’ championship with an advantage of many points. I’m very happy. The result has shown what a great car we have because our race speed is incredible: compliments to Audi and ‘thank you’ for that.”