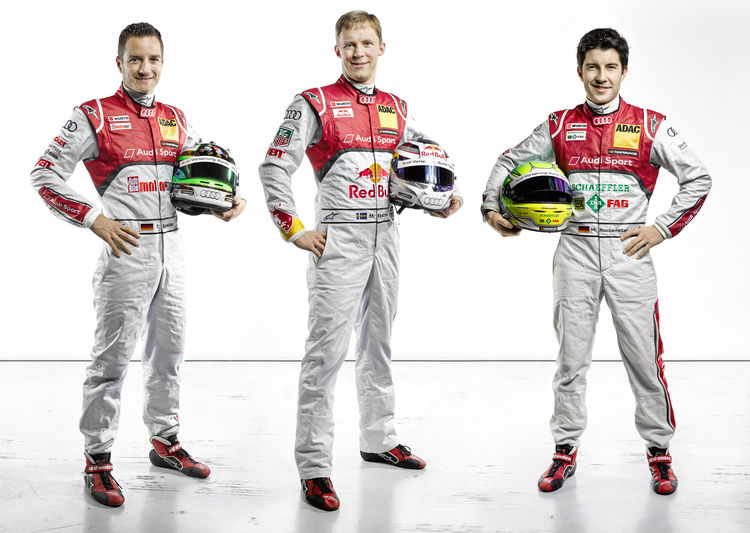 It’s been sealed: For the first time in DTM history, Audi will be competing with three DTM Champions in the 2014 season. Following Mike Rockenfeller (D/30), Mattias Ekström (S/35) and Timo Scheider (D/35) have been confirmed as drivers as well.

“I’m delighted that, alongside title defender Mike Rockenfeller, our two most successful DTM drivers also continue to be on board,” says Head of Audi Motorsport Dr. Wolfgang Ullrich. “Eki and Timo have been important pillars of our DTM squad for years. They’re great guys, strong personalities, popular with the fans and perfect ambassadors for the four rings.”

Mattias Ekström is tackling an amazing 14th DTM season for Audi next year. From 2001 to 2003, he competed in the Abt Audi TT-R. Since 2004, the Swede has been an Audi factory driver. With 17 victories and two Champion’s titles (2004 and 2007) under his belt he is the most successful Audi DTM driver of all. “Audi has long become my second home,” says the Swede. “I’m fully motivated to battle for victories and Championship titles for Audi again in 2014.”

Timo Scheider joined Audi in 2006 and in his first season was immediately the best driver of a year-old Audi. In 2008 and 2009, he won the DTM, perfecting a title hat-trick for Audi. Audi has been the first and only automobile manufacturer to date to have clinched three DTM drivers’ titles in succession.

“The dream with Audi can continue,” says Timo Scheider, looking forward to his ninth season under the symbol of the four rings. “It’s been my wish to keep driving for Audi and it’s a nice feeling to continue to enjoy the brand’s trust after so many years. I’m hoping for us to have many more successful years together.”


For Dieter Gass, Head of DTM at Audi Sport, Ekström, Rockenfeller and Scheider are three important pillars in the title defense project. “As our two competitors are going to leave no stone unturned next year to challenge us for the title, we’ve got to be poised with a strong line-up that’s up to the challenge. Having three drivers in the squad who know how to win in the DTM gives us a good feeling. And the other five cockpits will be filled with strong drivers too.”