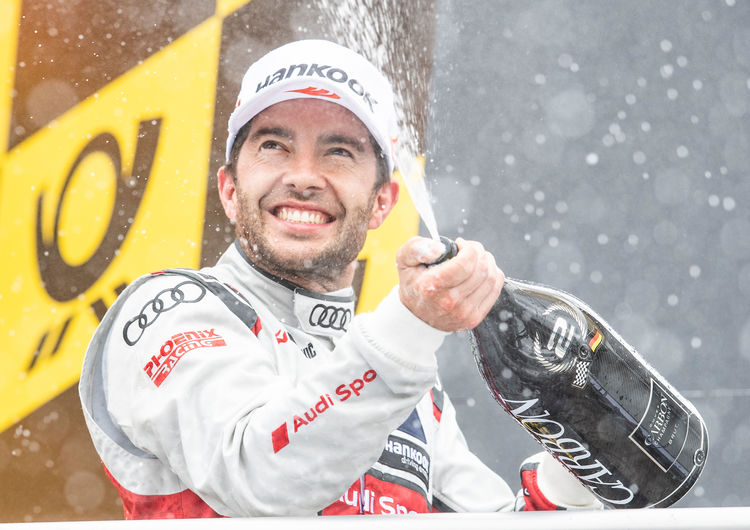 From fourth on the grid, the 2017 DTM Champion fought his way forward to second in cold and wet conditions, and subsequently went on to chase race leader Marco Wittmann in a BMW. The Audi driver seemed to have good chances of celebrating his seventh consecutive DTM victory when he coasted down his Audi RS 5 DTM with a transmission problem six laps before the end.

“Of course that was extremely unfortunate,” said Head of Audi Motorsport Dieter Gass. “René was battling for victory and put a lot of pressure on Marco (Wittmann). We have to live with this and will attack again tomorrow. Today was a race in very difficult conditions from lights to flag. In Mike and Robin we put two drivers on the podium, plus Loïc (Duval) in fifth place. Overall, that’s a good result.”

Mike Rockenfeller in his Audi RS 5 DTM started from the front row alongside Marco Wittmann after having missed pole position by only 66 thousandths of a second. In the race, he was struggling with his first set of tires. “Unlike in qualifying, I hardly had any grip,” said Rockenfeller. “I don’t know the reason. On the second set of tires, everything was okay again but at that time, victory was already lost. Still, it was a good season opener. It’s nice to be on podium and I’m happy about good points.”

Robin Frijns in his Audi RS 5 DTM pulled off a lightning start with which he improved from fifth to second place, but then dropped behind Rast and Rockenfeller. “The conditions especially at the beginning were really extreme,” said Frijns. “So I’m all the happier about the podium.”

Loïc Duval and Nico Müller, in positions five and eight, scored points for Audi as well. Jamie Green had to settle for twelfth place after a clutch issue.

For the second race of the new DTM era on Sunday (start at 1.30 PM CEST, live on SAT.1 beginning at 1 PM) cold but sunny weather has been forecast.