Skip to content
We are using cookies for a better user experience.
07/05/21
Neuburg a. d. Donau
Sport 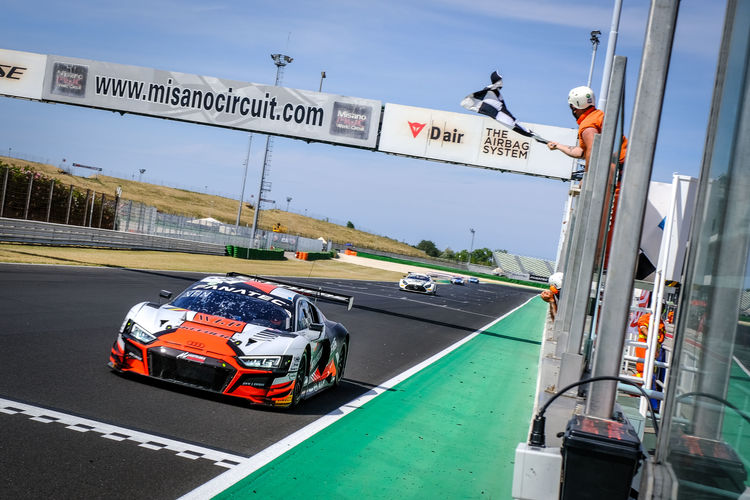 Audi Sport drivers Dries Vanthoor/Charles Weerts took a big step forward in their mission to defend the title in the Fanatec GT World Challenge powered by AWS Sprint Cup with two victories. Also at Misano, the Audi R8 LMS GT2 continued its unbroken string of successes on the first weekend in July.

Two wins for Team WRT in Misano: At the third round of the Fanatec GT World Challenge powered by AWS Sprint Cup, Audi customer team WRT was unbeatable. The two Audi Sport drivers Charles Weerts and Dries Vanthoor won both sprints in the Audi R8 LMS GT3 on the Italian Adriatic coast. This gave them a clear advantage in defending the title. Charles Weerts started the first race from pole position and withstood the strong pressure from his pursuers. At the rather late driver change on lap 15, Team WRT completed the fastest stop of the race. Teammate Dries Vanthoor took up the race with a lead of around two seconds. After a caution period, the Belgian was able to cross the finish line 1.1 seconds ahead of the next car. Léo Roussel and Christopher Haase in another Audi R8 LMS recorded the first podium result of the season for Saintéloc Racing in third place, followed by their teammates Aurélien Panis/Frédéric Vervisch. On Sunday, Dries Vanthoor started to the second race in third place. On lap 16, he beat Ferrari driver Patrick Kujala in a duel and took over second place. At the pit stops, WRT was again the fastest team and sent Charles Weerts into the race six seconds ahead of his pursuers. The Belgian further extended his gap and crossed the finish line eleven seconds ahead of his nearest pursuers. Benjamin Goethe/Kelvin van der Linde were delighted with another trophy for the Belgian team in third place. Weerts/Vanthoor have thus not only won five of the last six races at Misano that they have contested together so far for Vincent Vosse’s team. They are already setting their sights on their next titles: last year’s sprint champions have a 28.5-point lead over the Mercedes duo Timur Boguslavskiy/Raffaele Marciello in this discipline after three of five events. WRT is 18.5 points clear in the team standings. In the overall standings of the race series consisting of sprint and endurance races, Vanthoor/Weerts hold on to first place with a 25.5-point lead over Marciello, while WRT is 29 points ahead of the Mercedes team Akka ASP.

Victory in Denmark: Valdemar Eriksen was the fastest GT driver at the third round of the Danish Endurance Championship. At the Jyllandsringen near Aarhus, the Dane won the first 50-minute race in the Audi R8 LMS with a lead of almost ten seconds. In the second race, Eriksen was again the fastest GT driver but had to admit defeat to a technically much more complex LMP3 sports prototype in his class with the production-based race car.

Two second places in Norway: Audi customer Wiggo Dalmo returns from the third round of the Norwegian sports car racing series Racing NM with two trophies. On the Sokndal circuit in the south of the country, he missed victory in the first sprint by just 0.588 seconds. In the third sprint, Dalmo’s R8 LMS again crossed the finish line in second place, 0.7 seconds behind.

Six in a row: The Audi R8 LMS GT2 remained the benchmark at the third event of the GT2 European Series at Misano. The 640-hp race car has now won the first six individual races of the series. Mark Patterson and Anders Fjordbach started the first competition from eighth place and improved to second position. When leader Sehdi Sarmini spun in the KTM, Mark Patterson took the lead. At the pit stop, the American handed over his Audi to teammate Anders Fjordbach. The Dane pulled away from his nearest rival by 15.5 seconds in the second half of the race. Thus, the High Class Racing team celebrated its fourth victory of the season, followed by Stéphane Ratel/Luca Pirri and Peter Guelinckx/Bert Longin in two other Audi R8 LMS GT2 cars. In the second race, which was held at night for the first time, Bert Longin at the front withstood the pressure of his pursuer Anders Fjordbach. After the driver change, the two coupes with the four rings were in reverse formation at the front of the field. Peter Guelinckx now chased the leader Mark Patterson, overtook him with eight minutes to go and celebrated the second win of the season for Team PK Carsport with his teammate Bert Longin. In the standings, Patterson/Fjordbach increased their lead over Guelinckx/Longin by three to 26 points at Misano.

Successful performance in Germany’s Lausitz region: Seyffarth Motorsport fielded three Audi R8 LMS GT4 cars in the third round of the P9 Challenge club racing series. Max Zschuppe won his class at the Lausitzring in the first 30-minute race with a 0.4-second lead over Tobias Erdmann, third place went to Vivien Schöllhorn. In the second sprint, the three GT4 sports cars crossed the finish line in the same order.

Lead in the standings preserved after comeback race: Jonathan and Steven Giacon started the second event of the TCR DSG Europe where they had finished the season opener at the end of May: right at the front. However, the joy of pole position lasted only briefly for the two Italians as a puncture at Misano cost the Audi RS 3 LMS of Team Tecnodom Sport two laps already in the opening phase. The pair of brothers showed a remarkable recovery in the course of the two-hour race and still improved to second place. Third place went to Samuele Piccini/Romy Dall'Antonia in a BF Motorsport Audi RS 3 LMS. Jonathan and Steven Giacon lead the standings by ten points after two of five events.

Second best result of the season for Road Shagger Racing: Two Audi privateer drivers achieved their second podium result of the season in the IMSA Michelin Pilot Challenge. On the rainy track at Watkins Glen, four race cars battled for victory until the very end. Gavin Ernstone/Jon Morley were temporarily in front in the Audi RS 3 LMS and finally crossed the finish line in third place after the turbulent final laps. When a Honda team which was initially second received a penalty, Ernstone/Morley moved up one position. It was their second-best result of the season after winning at Sebring in March. Ernstone/Morley are fourth in the standings at the halfway point of the season in the field of 29 classified TCR driver teams.

Three trophies in Polish club racing: At the third round of the Polish racing series Wyścigowych Samochodowych Mistrzostw Polski, two Audi customer teams finished on the podium a total of three times. In the first sprint on the Poznań circuit, Franek Jakub in the Audi RS 3 LMS finished second in his class. The second sprint was won by Łukasz Stolarczyk in the Audi RS 3 LMS of the BTC Maszyny team, while Franek Jakub finished in third place.

Podium result at Silverstone: Simpson Motorsport was once again one of the best contenders in the TCR class at the fourth round of the Britcar Endurance Championship. Hugo Cook/Sacha Kakad were second best of eleven competitors in their class in the British endurance series after two hours of racing in the Audi RS 3 LMS.