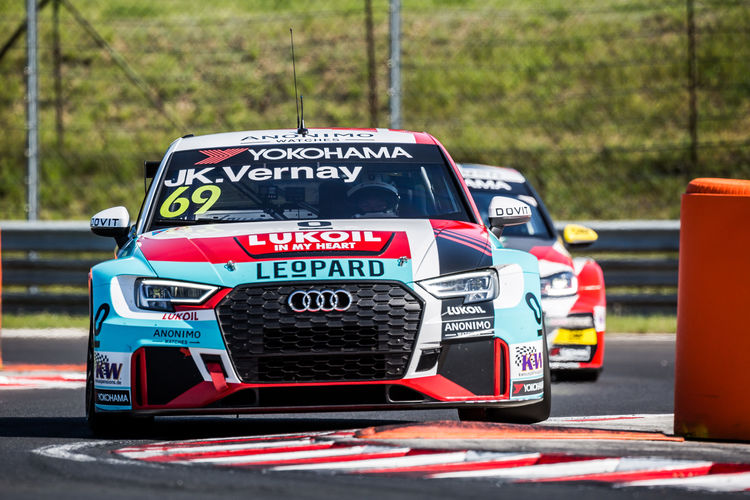 After Audi Sport customer racing achieved a victory in the opening round of the WTCR – FIA World Touring Car Cup in Marrakesh three weeks ago, the second weekend in Hungary ended in disappointment. Jean-Karl Vernay, who managed a remarkable fightback in each of the three races, was only one of six drivers of an Audi RS 3 LMS to score points at the Hungaroring.

As last year’s champion in the TCR International Series, Jean-Karl Vernay knows how to clinch victories and titles. At the Hungaroring, however, the 30-year-old pro in his Audi RS 3 LMS was equally powerless as his five brand colleagues. In Saturday’s race, the Frenchman advanced from eleventh position on the grid to eighth place. In rounds two and three, his performances were better yet. The driver from Audi Sport Leopard Lukoil Team improved by five positions each time and in tenth place scored points. His teammate, Gordon Shedden, came 18th in race one and fifteenth in race two. In race three, the Scotsman shone with a comeback drive from grid position 21 to 13th place.

“The Audi RS 3 LMS clinched nine podium results in six racing series around the globe, including three victories, this weekend,” said Chris Reinke, Head of Audi Sport customer racing. “Our customers prove the versatility and capability of our race touring car week after week. Unfortunately, under the prevailing conditions at Budapest, a better result was not possible. We’re going to leave no stone unturned to ensure that this will change at the Nürburgring in two weeks from now.” There a total of seven Audi RS 3 LMS cars will be on the grid in round three of the series. DTM Champion René Rast is set to thrill the fans around the Nordschleife as a guest entrant. Audi Sport customer racing unveiled the livery of his race car in Hungary. Throughout the race weekend, the touring car featuring the colors of Esports WTCR Oscaro was an eye-catcher in the paddock.

In two weeks’ time, the notorious Nordschleife of the Nürburgring is awaiting the teams. From May 10 to 12, three single races are scheduled on the 25.378-kilometer track in the Eifel. Guest entrant René Rast and Frédéric Vervisch will be competing in two events. Following the WTCR – FIA World Touring Car Cup, they will try to clinch the brand’s fifth victory in the 24-hour race together with their GT3 teammates at the wheel of the Audi R8 LMS.