Disappointment for Audi at the Nürburgring 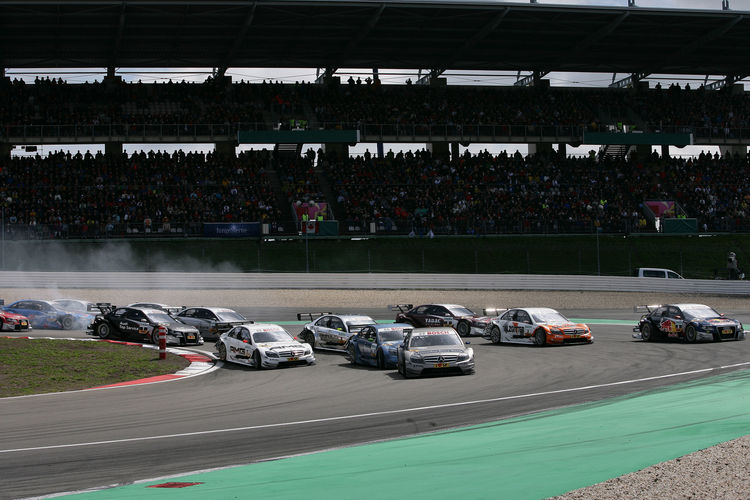 It is barely a year ago that Audi celebrated a commanding one-two-three-four victory in the DTM race at the Nürburgring. This time, the title defenders had to settle for places four and seven in the Eifel in front of a crowd of 86,000 spectators (throughout the weekend).

For the first time this season Timo Scheider was the best Audi driver. The reigning DTM Champion pushed forward from eighth to fourth place at the start. When attempting to fight for third, Scheider subsequently lost one position which he managed to recover, though, thanks to quick pit stops by Audi Sport Team Abt Sportsline. Finishing the race in fourth place, the two-time DTM Champion just barely missed his first podium result of the year.

For Mattias Ekström, who had secured the pole position with a commanding performance on Saturday, the race did not go according to plan. The Swede dropped to seventh place at the start and was unable to improve again afterwards. In addition, he lost time due to a problem during the first pit stop. “As much fun as my car was for me yesterday as boring it was for me today,” commented the Swede. “We missed the mark on the set-up and were fighting with a dull weapon.”

The same applied to his team colleagues Oliver Jarvis and Martin Tomczyk, who crossed the finish line on positions eleven and 13. In addition, Tomczyk’s Audi A4 DTM was affected by two collisions in the early stage of the race.

The best driver of a year-old A4 was Mike Rockenfeller (Audi Sport Team Phoenix) in ninth place. Miguel Molina (Audi Sport Rookie Team Abt) and Katherine Legge (Audi Sport Team Rosberg) occupied positions 14 and 15. Markus Winkelhock was eliminated as early as in turn one. Alexandre Prémat slipped off the track on the eighth lap while attempting to overtake Oliver Jarvis on the outside and was not noticed in the process.

“On the whole, this was a very disappointing result for Audi,” stated Head of Audi Motorsport Dr. Wolfgang Ullrich. “We simply didn’t manage to adjust to the track conditions which had significantly changed after the heavy rainfalls this morning. Our rivals did a better job of this.”

Just 14 days from now the Audi squad will have the chance for revenge: at Zandvoort (the Netherlands), on August 22, the sixth round of the season will be on the agenda. “We’re going to work hard in order to be capable of winning again there,” said Dr. Ullrich.