Skip to content
We are using cookies for a better user experience.
09/15/19
Ningbo/Neuburg a. d. Donau
Motorsport

Links
{{ activeItem() }}
Twitter
10/24/21
Victory in the @OfficialChinaGT at Zhuhai: Team X Works took a win with the #91 Audi R8 LMS driven by Rio Ma and Da… https://t.co/twq50Msmcl
10/24/21
Audi 1-2-3 in @OfficialChinaGT at Zhuhai: The FAW-VW Audi Racing Team won race 2 with the #99 Audi R8 LMS of Cheng… https://t.co/kFECarj6Uc
10/23/21
Podium at the Hockenheimring: Audi Sport driver @MiesChris and teammate Ricardo Feller finished runner-up in the fi… https://t.co/3qQ6HYsB7e
10/23/21
Victory in the @OfficialChinaGT at Zhuhai: The FAW-VW Audi Racing Team took a win in race 1 with the #99 Audi R8 LM… https://t.co/sT9I5UpJcB
Audi Sport on Twitter
{{ activeItem() }}
Facebook
10/21/21
Next highlight on our Road to Dakar: The first of the three new Audi RS Q e-tron* being assembled to run in the 2022 Dakar Rally had its roll-out with Mattias Ekström and EMIL Bergkvist on our new off-road test track in Neuburg this week. >> audi.com/Dakar #FutureIsAnAttitude #RSQe-tron #RoadToDakar #Dakar2022 -------------------- *This vehicle shown here is the Rally Dakar vehicle that is not available as a production model. Closed course, professional driver. Do not attempt.
10/19/21
Meet our driver crews for the Dakar Rally: 🇫🇷 Starting with the reigning winners – Mr. Dakar himself Stéphane Peterhansel and his co-driver Edouard Boulanger. >> audi.com/Dakar #FutureIsAnAttitude #RSQe-tron #RoadToDakar #Dakar2022
10/18/21
In addition to Audi Sport customer racing’s victory at the Indianapolis 8 Hour, our customers around the world also clinched numerous podium successes in GT and touring car racing with our four models – highlighted by Comtoyou Team Audi Sport winning again with the new Audi RS 3 LMS. 🇫🇷 🇩🇪 🇺🇸 🇩🇰 🇨🇳 🇮🇹 🇯🇵 🇵🇹 🇳🇿 >> audi.com/GT3 >> audi.com/GT2 >> audi.com/GT4 >> audi.com/TCR #PerformanceIsAnAttitude
10/18/21
In the final episode, Audi DTM racing driver Nico Mueller and rallying legend Fabrizia Pons go beyond what it means to be a winner. Discussing that it’s not just about the car you drive but about the passion which fuels you. #Audi #quattroMoments -------------------- Audi RS e-tron GT: Power consumption combined: 20.2-19.3 kWh/100km (NEDC); 22.5-20.6 kWh/100km (WLTP); CO2 emissions combined: 0 g/km. Information on fuel/electricity consumption and CO2 emissions in ranges depending on the equipment and accessories of the car. Further information: www.audi.com/dat
Audi Sport on Facebook 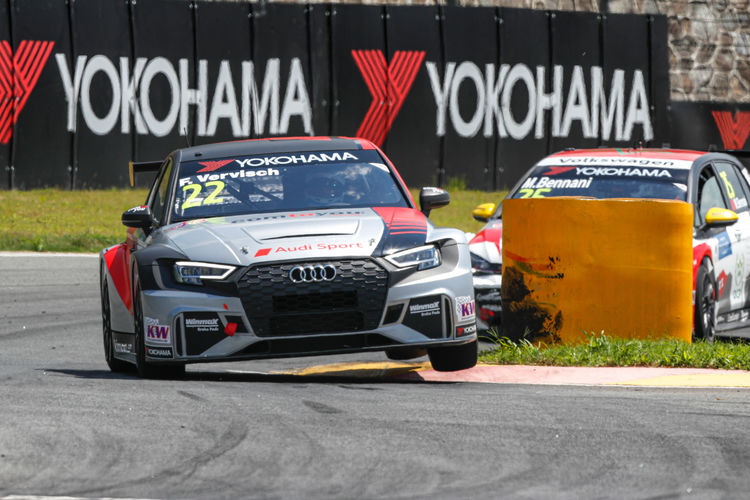 Unfavorable positions in both qualifying sessions deprived Audi Sport customer racing of better results on the seventh race weekend of the WTCR – FIA World Touring Car Cup in China. In the end, seventh place clinched by Frédéric Vervisch following a display of fighting spirit in the third race was the best result for the Audi RS 3 LMS at Ningbo.

In China, Comtoyou Team Audi Sport and Leopard Racing Team Audi Sport experienced an extremely difficult weekend because the four Audi Sport drivers clearly remained below their expectations as early as in both qualifying sessions. Tenth position by Niels Langeveld for the first sprint race was the best result in qualifying. The Dutchman in the Audi RS 3 LMS of Comtoyou Team Audi Sport improved to ninth place in a race that saw no major positional shifts. In the turbulent second race, Jean-Karl Vernay was the best driver under the banner of the four rings. From 13th on the grid, the Frenchman had already fought back to seventh position when shortly before the end of the race some fierce battles with plenty of body contacts ensued. Vernay was one of the victims and ultimately crossed the finish line in the eleventh spot.

Subsequently, the third race turned out to be the best one for Audi Sport this weekend. Frédéric Vervisch had entered the final competition in fourteenth place. The Belgian from Comtoyou Team Audi Sport made up one position after another, avoided contacts with his opponents in an accident-prone race and in doing so improved to seventh place. Gordon Shedden from Leopard Racing Team Audi Sport clearly moved forward twice as well: from the 25th spot, he fought back to 14th position after fierce attacks by his rivals in the second race and to 15th in the third round. The victims of accidents not of their own doing in the last race included two Audi Sport drivers, Jean-Karl Vernay and Niels Langeveld. Even so, each of the four drivers of an Audi RS 3 LMS scored points in China.

“That all four drivers showed a strong fight in China and kept making up ground in the races is a positive,” said Chris Reinke, Head of Audi Sport customer racing. “Our weakness this time was clearly in the qualifying sessions. This deprived our drivers of many chances. We need to move on from the weekend in China and clearly improve in qualifying at the next round.”

Following the race in China, Japan is coming up next on the FIA WTCR calendar. From October 25 to 27, the touring car racing series will hold its eighth event on the challenging circuit at Suzuka.