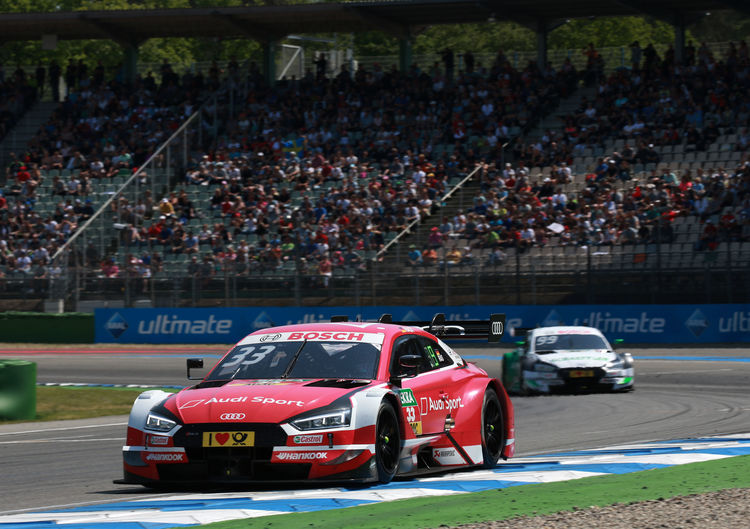 The results that proved disappointing for Audi had already become apparent in the morning’s qualifying session. Reigning DTM Champion René Rast in ninth place was the only Audi driver in the top ten. Mike Rockenfeller trailed him in eleventh position on the grid and the other five Audi RS 5 DTM cars in positions 14, 16, 17, 18 and 19.

In the race, the Audi drivers chose various strategies. Most successful were Rast and Duval who only changed tires after the race’s midpoint and made up several positions with fresher tires on the last laps. Nico Müller (Audi Sport Team Abt Sportsline) pitted late as well but was struggling with vibrations following his pit stop. He finished in position 13. Following an early stop, Mike Rockenfeller was running in sixth position some of the time but dropped to 14th in the final stage. Mattias Ekström, Robin Frijns and Jamie Green saw the checkered flag in positions 17, 18 and 19.

“That it would be a difficult first race for us didn’t come as a total surprise,” said Head of Audi Motorsport Dieter Gass. “Even in qualifying, we had a half-second gap to the fastest lap. That repeated itself in the race. On paper, half a second isn’t much, but in the DTM, it makes a world of difference. We’re going to leave no stone unturned to improve tomorrow. But our assumption that the change in regulations would be difficult for us to contend with seems to prove true.”

Race two will start at 1.30 p.m. on Sunday and at Audi be under the banner of Mattias Ekström’s farewell. The Swede will contest his last DTM race at Hockenheim. SAT.1 will air live coverage of Sunday’s race starting at 1 p.m. (CEST).