Skip to content
We are using cookies for a better user experience.
05/01/19
Neuburg a. d. Donau
Sport

Dieter Gass: “In the DTM, the fans can look forward to super-thrilling racing”

{{ activeItem() }}
Twitter
03/08/21
Yasser Shahin &amp; Matthew Stoupas, in an @MelbPerformance-run Audi R8 LMS, finished 3rd in the 4-hr endurance race at… https://t.co/HI3sW9UzNu
03/05/21
.@abtmotorsport is returning to the @DTM in 2021 with two Audi R8 LMS entries. The driver line-up includes two Audi… https://t.co/NEgKa5fmQB
03/04/21
Wishing good luck to all of the Audi teams racing this week: 🇺🇸 @GT4America at @RaceSonoma 🇺🇸 @gt_america_ at… https://t.co/8Il0DLQdlH
03/02/21
Team Rosberg will run two Audi R8 LMS entries in the 2021 @DTM season. The team’s line-up includes Audi Sport drive… https://t.co/28Jii1M4dW
Audi Sport on Twitter
{{ activeItem() }}
Facebook
02/27/21
We are saddened to hear the news about the passing of Hannu Mikkola, a longtime friend of Audi Sport and the World Rally champion with Audi in 1983. We send our sincere condolences to his family and friends.
02/26/21
Strong pace for the Audi e-tron FE07 in Diriyah: Fourth place for René Rast and Lucas Di Grassi moved forward seven places to ninth. Both cars in the points and tomorrow we race again. >> audi.com/FormulaE #FutureIsAnAttitude #DiriyahEPrix
02/25/21
Audi Sport ABT Schaeffler in the 2021 ABB Formula E World Championship. First-ever Formula E night races coming up on Friday and Saturday at 20:03 local time (18:03 CET). Broadcast info >> fiaformulae.com/watch #FutureIsAnAttitude #DiriyahEPrix
02/24/21
Three E-Prix so far in Diriyah since 2018 with our highlight in 2019: Lucas Di Grassi on the podium with a runner-up finish. Aiming for more this week in the first two night races in ABB Formula E history, February 26–27. >> audi.com/FormulaE #FutureIsAnAttitude #DiriyahEPrix
Audi Sport on Facebook 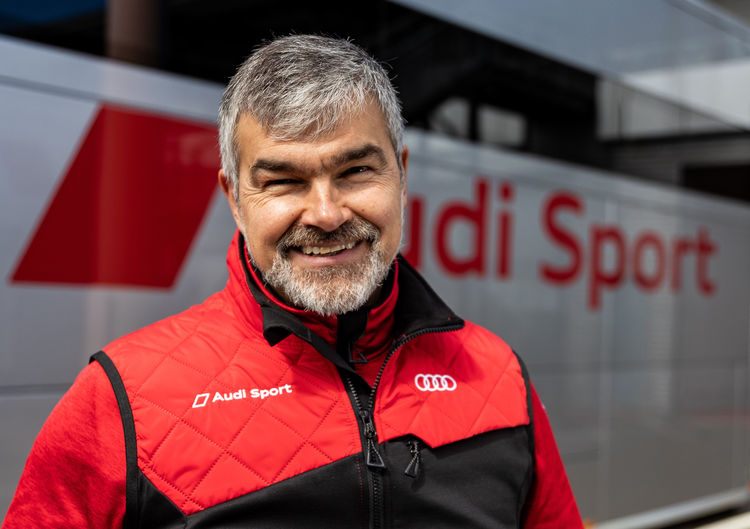 This weekend (May 4/5), the new DTM season kicks off at the Hockenheimring. Head of Audi Motorsport Dieter Gass talks about the new turbo era in the DTM, Aston Martin’s entry and the internationalization of the series.

Why should motorsport fans be excited about the 2019 DTM?
In the DTM, motorsport fans can always, and that’s again true for 2019, look forward to super-thrilling racing. With the more powerful engines and Aston Martin’s participation, the thrill will no doubt be raised to yet another new level.

What is changing as a result of the turbo engines?
The major change is that we have a turbo engine with some 100 additional horsepower. At the same time, it’s very important that in the DTM we’re now racing with a four-cylinder turbo engine, in other words, a high-efficiency engine of the type we also use in various performances levels in a very large number of our production models. Our drivers have been totally enthusiastic about the engine ever since the first test. They can clearly feel the additional power. The higher tire wear this entails, especially on the rear driven wheels, will pose a special challenge to their driving skills.

The DTM deliberately uses efficient turbo engines, and so continues to race with IC engine technology. Why?
This is an initial step. We’ve long been in discussions with the ITR about where to go from here. Of course, we always have to keep an eye on costs, but we’re definitely looking into options such as introducing synthetic fuels and hybrid technology.

Wouldn’t the DTM have to become electric?
Our factory-backed motorsport program deliberately rests on two pillars: Formula E supports electric mobility and the DTM modern, highly efficient IC engines of the type being fielded in Class 1 starting in 2019. At the current state, Audi will be selling more cars with IC engines than with electric powertrains for the foreseeable future. That’s why a racing series with modern IC engines definitely makes sense. In the DTM, we’re now going to use a 2.0 TFSI engine. Audi uses this engine concept worldwide in many production models and performance levels and it is an important element in the context of reducing fleet emissions.

With the new turbo engine for the DTM, how intensive is the exchange between motorsport and production that has traditionally been very important at Audi?
That was a decisive reason why we took a strong stance on the DTM using the turbo engine. The new Class 1 regulations focus on efficiency and lightweight design – both are extremely important in everyday driving as well. In racing, we point out approaches that will hopefully make their way into future production models as well – In Formula E just like in the DTM.

In 2019, the DTM will for the first time see a customer team competing again: WRT Team Audi Sport. What are your expectations of the Belgian outfit?
WRT is a highly professional team that has been celebrating many successes in Audi customer sport for years. WRT now wants to take the next step and move up to a higher level. I know they’re able to do this and definitely expect some positive surprises because they receive the same ‘material’ as our factory teams – very similar, by the way, as our Formula E customer team Envision Virgin Racing that scored a Formula E race win in only their third event.

What’s your assessment of Aston Martin?
The participation of this international premium manufacturer is good for the whole series. I expect Aston Martin to present themselves on an equal footing.

What can fans look forward to at the first joint race of the DTM and the Super GT in Japan at the end of November?
It’ll be a super-spectacle when we’re on the grid with six manufacturers (Aston Martin, Audi, BMW, Honda, Lexus and Nissan) and more than twenty cars. That’s going to set off a real fireworks of racing. The guest entry of the Japanese manufacturers in the DTM finale at Hockenheim will be very interesting as well.