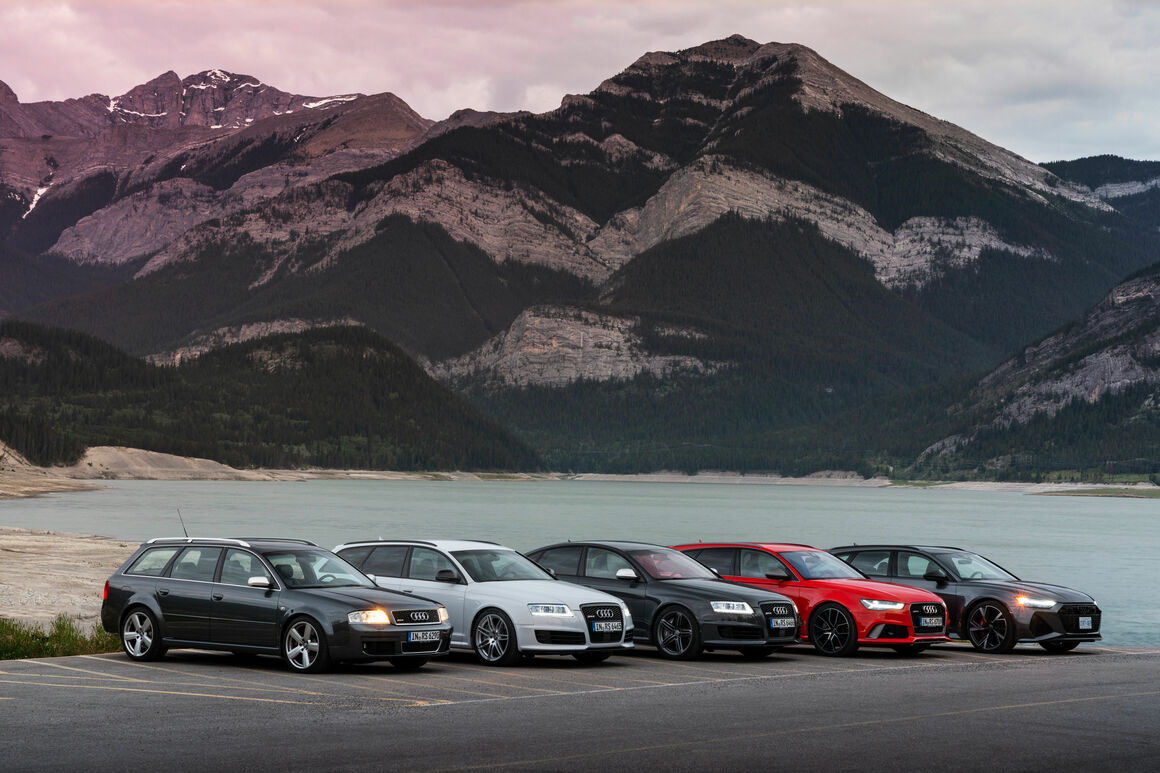 ... the DRC chassis (Dynamic Ride Control) originated in the first generation (C5) and is still used today in the current generation (C8) with the same functional principle?

... the wide construction of the RS 6 requires modified tanks and longer tank piping? Refueling during the prototype drives in the development phase always brings a smile due to the noise of the air known as “tank mooing”. Thanks to further tank piping optimization, this noise is naturally switched off in series production.

... the current C8 generation of the RS 6 only has three exterior carryover parts from the basic model? Specifically, they are the roof, the two front doors, and the tailgate.

... the engine in the C6 generation of the RS 6 took up so much space in the front that we moved the cooling water reservoir to an unusual position? The passenger door had to be opened to check the coolant level, and the cooling water level read off the bottom of the A-pillar.

... the exterior color “Sebring Black Crystal Effect” — exclusively offered for the first time in the C8 generation — took its name from the racing premiere of the RS 6 (C5) “Competition” (SCCA = Sportscar Club of America) on March 14, 2003, in Sebring, Florida? To this day, all RS colors in the name refer to well-known international racetracks.

... any RS 6 generation can have a biturbo-charged engine?

... going back to the first generation, the RS 6 was the first and only RS model that consistently implemented the double-flow RS exhaust system with oval tailpipes that are today’s standard?

... all RS 6 generations have a quattro drive?

... the flat LED headlights of the C8 generation come from the Audi A7 of the same era? Consequently, the RS 6 is visually very different from the other A6 models and the only model within the A6 family that can be ordered with laser light.

... because of the large units and technologies like additional cooling, the auxiliary heater planned at the start of the C6 and C7 generations had to be replaced? This special feature, popular with customers, has only been available since the C8 generation due to better space. It emphasizes the vehicle’s suitability for everyday use.

... the C8 generation is the first Audi model to feature completely black-painted alloy wheels as standard equipment for the winter season?

... the aluminum matte look package is only available on RS models and has been used since the first generation? Today, in addition to aluminum matte, there are optical packages in black and carbon.

... the wide construction used since the C5 generation is unique in the competitive environment? It offers space for larger wheel diameters, creates a muscular look, and enables sportier handling.

... one of the most popular Audi exclusive interior colors, Cognac Brown, was used in the limited-edition RS 6 plus (C5) model in 2004? Today, this color is an option for the RS 6 as an homage to the first generation.

... the RS 6 Avant matured from a European car to a global success model and consistently tapped into important growth markets? It has been available in China since the C7 generation and the United States of America and Canada since the C8 generation.

... the first RS 6 generation was used for racing in North America, namely in the Speed GT class of the American Le Mans Series (ALMS) program? Randy Pobst was the champion in the first season. His teammate Michael Galati came in second.

... the “Pirelli Noise Canceling System” (PNCS) was used for the first time in the C7 generation? These special tires produce low rolling noise because of a polyurethane sponge integrated into the tire body. The system absorbs most of the vibrations, ensuring significantly less noise pollution.

... half of all RS 6 customers in Europe now order a towing hitch. They are taking advantage of the RS 6's DNA and its suitability for everyday use.

The link to the press kit for the 20th anniversary of the Audi RS 6 can be found here.