Skip to content
We are using cookies for a better user experience.
07/27/21
Neuburg a. d. Donau
Sport

Links
{{ activeItem() }}
Twitter
09/25/21
CarBahn with @PeregrineRace qualified third in the GTD class for the @IMSA WeatherTech SportsCar Championship race… https://t.co/4VYPMyk3Ay
09/23/21
MEDIAINFO: 100 days to go until the Dakar Rally: A race against time for Audi Sport &gt;&gt; https://t.co/tNLOfBm45l… https://t.co/xsF4kkNwxL
09/23/21
[1/2] Good luck to the Audi teams: 🇪🇸 @GTWorldChEu Sprint Cup finale at @CircuitValencia 🇩🇪 NLS @vln_de at… https://t.co/vv3SZUrN78
09/21/21
From the USA to Germany, we are welcoming an iconic driver to the Audi family. Get ready for a new type of high per… https://t.co/9jxN8IZset
Audi Sport on Twitter
{{ activeItem() }}
Facebook
09/23/21
Under the skin of our new Audi RS Q e-tron. T-100 days until the start of the 2022 Dakar Rally. >> audi.com/Dakar #FutureIsAnAttitude #RoadToDakar #Dakar2022 #RSQe-tron -------------------- Closed roads/professional drivers, instructors present /do not copy. This vehicle shown here is the Rally Dakar vehicle that is not available as a production model.
09/21/21
Racer, drifter, progressive thinker. There is a new face on the block who is ready to redefine high performance. Meet the newest member of our team now >> at.audi/KenBlock #FutureIsAnAttitude #Audi #AudiSport #etron -------------------- This vehicle shown here is the Rally Dakar vehicle that is not available as a production model.
09/20/21
Electrifying and exhilarating. Our partners at FC Bayern München got to experience the Audi RS e-tron GT* with a memorable afternoon at the Audi driving experience center at Neuburg an der Donau. Driving change never looked so fun. Discover more at >> at.audi/fcb-meets-e-tronGT #AudixFCB #FutureIsAnAttitude #etronGT #emobility -------------------- *Power consumption, combined*: 20.2–19.3 kWh/100km (NEDC); 22.5–20.6 kWh/100km (WLTP)CO₂ emissions, combined*: 0 g/km Closed roads/professional drivers,instructors present / do not copy.
09/20/21
Audi Sport Italia is on top of the standings in Italy thanks to another victory with the Audi R8 LMS. Adding to the success was a second overall GT3 triumph in China, a DTM Trophy win with the Audi R8 LMS GT4 and podiums for the Audi RS 3 LMS in four countries – just some of the highlights. Well done to our customers! 🇮🇹 🇨🇳 🇳🇱 🇩🇪 🇳🇴 🇪🇸 🇭🇷 >> audi.com/GT3 >> audi.com/GT4 >> audi.com/TCR #PerformanceIsAnAttitude
Audi Sport on Facebook 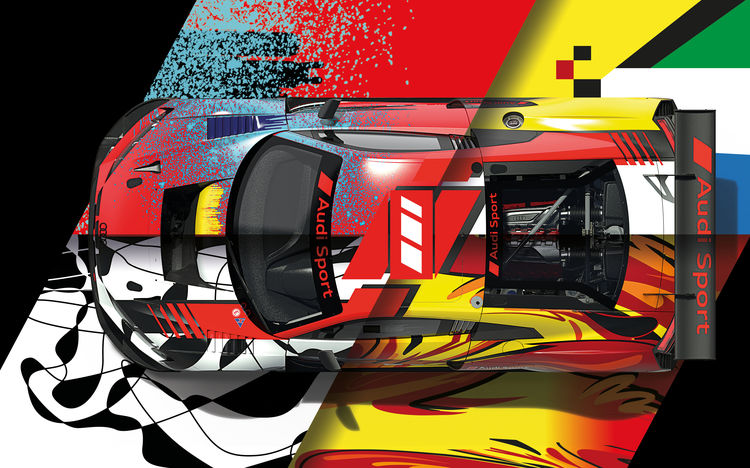 Audi Sport customer racing will be showcasing four one-off designs at the Spa 24 Hours from July 29 to August 1. The individual designs of the Audi R8 LMS pay homage to a major anniversary on the famous Ardennes circuit whose racing history began in 1921.

“It’s an honor for us to congratulate this awesome track on its racing anniversary,” says Chris Reinke, Head of Audi Sport customer racing. “We are doing this for the first time with four race cars exclusively dedicated to the design. They all cite references to Belgium and to various artistic and design traditions of the country.” Common to all four cars is the stylized number 100 for Spa’s racing century. This number overlays the red rhombus of Audi Sport on the race car roof. The design of this area symbolizes the gift in the style of a banderole.

Audi Sport Team Attempto, which missed last year’s victory by only 4.6 seconds, is fielding the number 66 R8 LMS in Belgium’s national colors this year. Black, yellow and red dominate the bodywork of the race car driven by Mattia Drudi, Dennis Marschall and Christopher Mies. This is complemented by a green hue. Graffiti-like spray patterns and flowing gradients give the car its unmistakable character. The surface of number 25 of Audi Sport Team Saintéloc contrasts with this: It is strictly geometric. The car from the 2017 winning team, this time driven by Christopher Haase, Patric Niederhauser and Markus Winkelhock, takes up the design ideas of Victor Servranckx. With his abstract works, the Belgian was a major graphic artist in his country in the first half of the 20th century. The red, yellow, green and blue patterns represent Servranckx’s formal language. The constructivist logo of the Spa race track on the doors of the R8 LMS fits perfectly into this design.

Audi Sport Team WRT, winner of the 24-hour race in 2011 and 2014, is bringing two more expressive themed cars to the grid. The GT3 sports car driven by Kelvin van der Linde, Dries Vanthoor and Charles Weerts represents the “Art nouveau” era. It coincides with the turn of the 19th to the 20th century. The pattern on the R8 LMS of number 32 picks up design elements of the fashion of the time. It originated in textile centers such as Antwerp, Belgium, among others. Audi Sport combines this design with lines depicting the course of the Spa circuit. The sister car of Robin Frijns, Dennis Lind and Nico Müller represents a theme that has inspired many people from childhood: the red and yellow patterns of number 37 reflect the lush and sweeping color and drawing style of comic strips. Great figures such as Tintin, Gaston or the ever-popular racing driver Michel Vaillant stand for various comic styles from Belgium that achieved fame around the globe.

On a sporting level, Audi Sport customer racing is again setting itself ambitious goals. A total of 60 sports cars from nine manufacturers will be competing against each other in the world’s biggest GT3 race. Audi was first represented by private teams at Spa in 2009 and 2010, and since 2011 the power of Audi Sport customer racing has been behind the program. For the brand, the race is already about the fifth victory after 2011, 2012, 2014 and 2017. No other manufacturer has been that successful in this period. This season, the race again counts towards two championships: It is the opener of the Intercontinental GT Challenge, which is held on the three continents of Europe, America and Africa this year. Spa is also the third of five rounds of the Fanatec GT World Challenge Europe Powered by AWS Endurance Cup. In the overall standings of this GT World Challenge Europe, the two Audi Sport drivers Dries Vanthoor and Charles Weerts are currently leading. Team WRT is first in the team classification. In addition to the four Audi Sport race cars, five private R8 LMS cars complete the brand’s line-up: Saintéloc Racing and Team WRT each field two additional GT3 race cars, Attempto Racing an additional R8 LMS. Former Audi DTM drivers like Jamie Green and Adrien Tambay share the cockpits with privateers.

In addition to the nine GT3 race cars in the 24-hour race, Audi expects eight R8 LMS GT4 cars in the GT4 European Series at Spa. At the halfway point of the season, the customer teams Saintéloc Racing and Fullmotorsport are leading their categories there with the production-based race cars. In addition, four Audi RS 3 LMS cars will be competing in the TCR Europe. Defending champion Comtoyou Racing is currently second in the team standings. In the touring car series, Dutchman Tom Coronel with the Audi RS 3 LMS is in a promising fourth position in the drivers’ standings, level on points with third place. Nicolas Baert leads the Junior classification.

Fans can follow the 73rd edition of the Spa 24 Hours from Saturday, July 31, 4:30 p.m. on the organizer’s livestream. Audi Sport customer racing comprehensively accompanies the event on its social media channels during race week from July 27.

The Audi Sport teams at the Spa 24 Hours