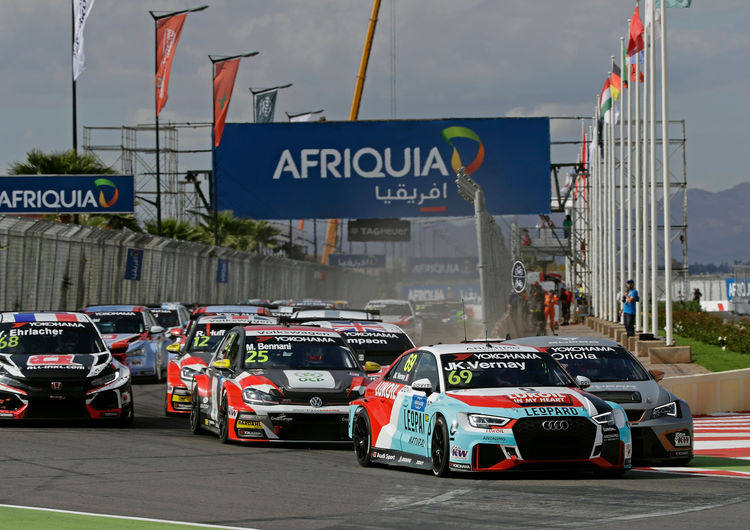 Audi Sport customer racing continued a great touring car tradition in Morocco. The last FIA World Touring Car Cup, which Audi won at the time, was held 23 years ago. Now Jean-Karl Vernay and the Audi Sport Leopard Lukoil Team made history at the beginning of a new era. In the WTCR – FIA World Touring Car Cup in Marrakesh, the Frenchman and the Belgian race team won the second of three races.

Audi Sport driver Jean-Karl Vernay picked up where he left off at the end of the 2017 season. As last year’s champion of the TCR International Series he started the new season as one of the best again. From position two on the grid, the 30-year-old pro took the lead in race two and would not lose his rhythm even during a caution period. He dominated the race for 20 laps, set the fastest lap and won with an advantage of 0.89 seconds. “I’d like to thank my team for the strong performance throughout the weekend,” said Vernay. “My Audi RS 3 LMS felt perfect.” Previously, in round one, he had placed fourth as the best Audi driver, followed by position nine in race three.

“Sincere congratulations to Jean-Karl and the Audi Sport Leopard Lukoil Team on this tremendous season opener and this victory,” said Chris Reinke, Head of Audi Sport customer racing. “This series is highly competitive and features a wide variety of marques, teams and driver personalities. This is the kind of touring car racing fans around the globe love.” Gordon Shedden on his first race weekend with Audi contributed to the team’s good overall results. The Scotsman as the second-best Audi driver placed fifth in race one and eleventh in race two.

The third Audi Sport driver, Frédéric Vervisch, was lacking the necessary racing fortune. The Belgian from Audi Sport Team Comtoyou retired in race one due to accident damage and was forced to park his car early in the two subsequent races as well. His teammate and compatriot Denis Dupont achieved position 13 in race one as his best result. The Frenchman Nathanaël Berthon clinched twelfth position in race one as the best result for Team Comtoyou Racing. Aurélien Panis scored his best personal result on taking position 15 in race two.

In just three weeks’ time the 24 drivers and seven marques will be pitted against each other again. The second of ten racing events is coming up on April 28 and 29 at the Hungaroring near Budapest.