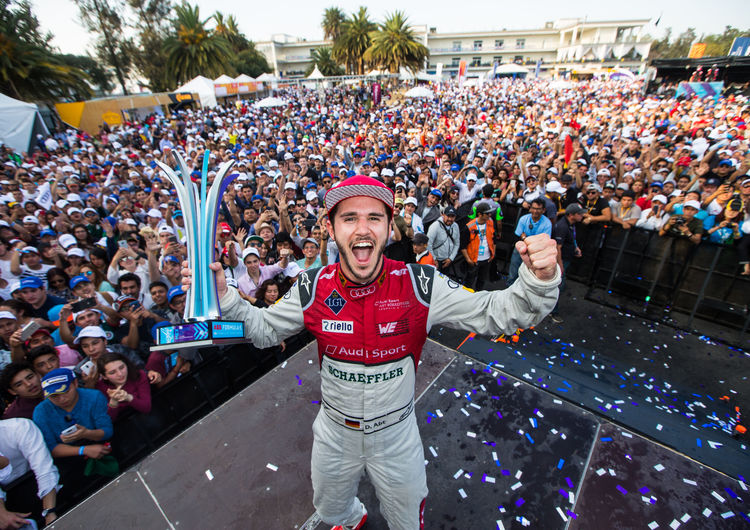 Daniel Abt from the Audi Sport ABT Schaeffler squad is the first German winner in Formula E history. In Mexico City, the 25-year-old produced a faultless race and in doing so simultaneously clinched the first victory for the Audi works team in the electric race series. Team mate Lucas di Grassi completed the big day for Audi with a comeback drive from last on the grid to ninth and the fastest race lap.

Great celebrations at the Autódromo Hermanos Rodríguez: In front of an impressive backdrop and around 500 enthusiastic employees from Audi Mexico, both Audi drivers produced great drives to ensure there was plenty of cheering and rejoicing in the grandstands like at a football match. Abt started the race from fifth on the grid, made up one place immediately at the start and by half-distance was second just behind the leader Oliver Turvey in a NIO. Abt took the lead following a perfect pit stop and afterwards sped away from his pursuers in his Audi e-tron FE04. After 47 laps, the German had an advantage of 6.398 seconds. Ex-Champion Sébastien Buemi in a Renault completed the podium.

“What a fantastic day – finally a win,” said Daniel Abt. “We’ve had hard times behind us, but never gave up and taken a commanding victory and ninth place here. I’m incredibly proud of everybody and can only thank the entire team: Both cars were simply perfect. There will be a proper party this evening!”

Defending Champion Lucas di Grassi was relegated to the back of the grid and also had to serve a 5-second penalty at the pit stop because the inverter on his Audi e-tron FE04 had to be opened between the races in Santiago de Chile and Mexico City. The Brazilian fought his way through the field and scored his first points of the season with ninth place and the fastest race lap. “That was an exciting race that was a lot of fun,” said the Brazilian. “Congratulations to Daniel: a fantastic job! He had already earned his first victory in Hong Kong. We never give up as a team and our fightback started today.”

“After the problems that we had in the first races this race tastes particularly sweet,” said Head of Audi Motorsport Dieter Gass. “We didn’t know exactly what to expect here. After qualifying the feelings were still a little mixed. But the race was top from both drivers. Lucas drove fantastically and I’m absolutely delighted for Daniel.”

“Daniel drove an incredible race,” said Team Principal Allan McNish. “It was pure class how he overtook and put himself in position to win. The race from Lucas with the fastest race lap and a difficult comeback drive also gives us a huge boost – not just the race team, but also the people back at base, who have worked very hard between the races. Congratulations to all!”

The next Formula E race is already on the agenda the Saturday after next (March 17) in Punta del Este in Uruguay.