Skip to content
We are using cookies for a better user experience.
09/30/19
Neuburg a. d. Donau
Sports 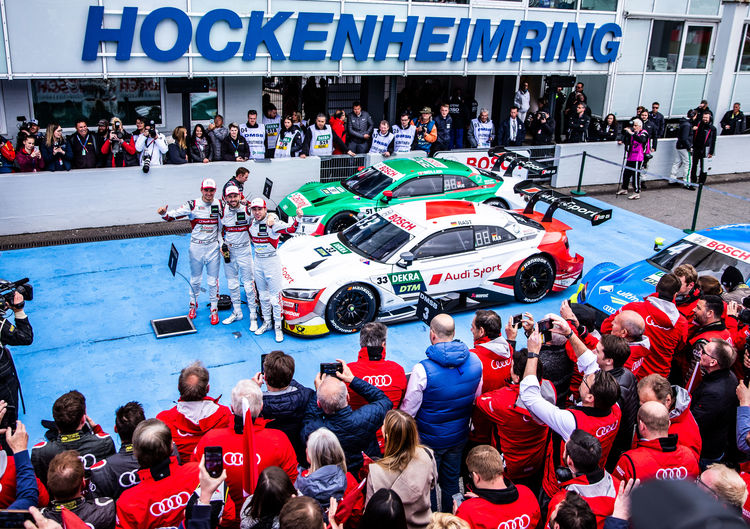 For the conclusion of the so far most successful DTM season in the company’s history, Audi has set its sights on another milestone achievement in the finale at the Hockenheimring (October 4 to 6): the 50th victory of the Audi RS 5 DTM. However, the competition is stronger than ever before: for the very first time in a DTM race, factory teams from six different automobile manufacturers will be pitted against each other.

At the Hockenheimring, Audi will not only have to prevail against its DTM competitors Aston Martin and BMW but also against a delegation from the Japanese Super GT Championship. Honda, Lexus and Nissan each have deployed one of their turbo race cars to the DTM finale at Hockenheim before the first joint race of the DTM and the Super GT is held at Fuji, Japan, at the end of November. One of the guest entrants will be 2009 Formula One World Champion Jenson Button.

“I’m tremendously looking forward to the race with the Japanese,” says Head of Audi Motorsport Dieter Gass. “We want to give the spectators a foretaste of how we envision the DTM in the future. Hockenheim is a race track that has always made fantastic racing possible. At the same time, we’d like to underscore our strong performance in the 2019 season with a good conclusion.”

Even before the last two races Audi is delighted about the so far most successful DTM season in the company’s history. Ten victories, ten pole positions and ten fasted race laps are credited to the Audi RS 5 DTM with its more than 610-hp two-liter four-cylinder turbo engine. 35 of 48 possible podiums were clinched by Audi drivers in the first sixteen races of the year. Five times the podium was completely in Audi’s hands, and eight times the front row of the grid. On 384 of 667 laps, an Audi driver was at the front of the field. The brand secured the manufacturers’ title as early as four races before the end of the season, and the titles in the drivers’ and teams’ classifications in the third from last race.

This success may still be topped: In 1991, 2015 and 2016, Audi achieved ten victories in one DTM season, respectively. In the finale at Hockenheim, this record might even be surpassed.

The Audi RS 5 DTM is already the most successful DTM race car in the company’s history. Since 2013, the RS 5 DTM in 111 races achieved 49 victories, 39 pole positions and 45 fastest laps.

The lion’s share of this impressive track record belongs to René Rast. The high-flyer has clinched two championship titles, 16 victories, twelve pole positions and seven fastest laps in his first three DTM years and broken two records within an extremely short space of time: At the end of 2017, the Audi driver scored six victories in succession. Plus, since the Nürburgring Saturday, Rast has been the first DTM driver to have secured pole position seven times in a single season.

Following his early title win at the Nürburgring, the driver from Audi Sport Team Rosberg can tackle the finale with ease. “Obviously, we’d still like to win the teams’ championship,” says Rast. “But after the championship title, the pressure is gone. I’ve been looking forward to the first race with the Japanese all year. Now I can really enjoy it. I think it’s going to be mega cool. For the first time, we have six manufacturers in the field. That’ll no doubt be really special. And the races at Hockenheim are always worth watching. The Parabolika is a highlight with DRS.”

Runner-up in the standings Nico Müller at the end of his so far best DTM season is “extremely” looking forward to Hockenheim, too. “That’s always kind of a home round with many Swiss fans,” says the driver from Audi Sport Team Abt Sportsline. “The season’s finale is really special with a mega atmosphere. We still have the big aim of securing the runner-up’s spot in the championship – and ABT continues to have the chance of winning the teams’ championship. That’s what we’re fully focused on.”

Before the finale, Müller has a 41-point advantage over Marco Wittmann in the best BMW. In the teams’ standings, Audi Sport Team Rosberg is 32 points ahead of Audi Sport Team Abt Sportsline. 96 points are yet to be awarded at Hockenheim.

Audi Sport Team Phoenix might still be able to bump BMW Team RMG from third position in the teams’ championship. The squad is spearheaded by Mike Rockenfeller in fourth position of the drivers’ classification. “Actually, my goal was to still finish the championship in third place,” says “Rocky.” “After the bad Nürburgring weekend, this is no longer realistic. That’s why I’m just going to enjoy the finale, go flat-out and try to make the best of it. I’m tremendously looking forward to the three Japanese. That’s going to be exciting.”

Robin Frijns in sixth place of the standings is dreaming of his first victory in the DTM, which he just barely missed most recently at the Nürburgring. “Racing together with the Super GT and Jenson Button will definitely be a highlight,” says the Dutchman. “We’re still battling for the teams’ championship, so there’s still something at stake. The season opener at Hockenheim with two third places went really well for me. I think we’ve got the chance of scoring a similarly good result.”

At the end of his third DTM season, Loïc Duval’s first victory is overdue, too. “With a little more luck, it could definitely have worked out this year,” says the Frenchman. “Audi has been extremely strong this season and I’m also happy with my own performance and that of my team. We’ve always been in contention at the front. I’m very much looking forward to the finale which is always attended by many fans. That we have three cars from Japan in the field is really cool. It’s going to be a fantastic event.”

Jamie Green has decided the finale at Hockenheim in his favor twice before. With 17 victories under his belt, he is currently the most successful active DTM driver. “Winning the last race of the season is especially rewarding,” says René Rast’s teammate. “Usually, there are fireworks when we cross the finish line. The photo is really cool. I’d like to help Rosberg win the teams’ championship and end the season with a good result.”

The customer team WRT Team Audi Sport can still win a title at the end of an impressive first DTM season as well: before the last two races, youngster Jonathan Aberdein ranks 25 points ahead of BMW driver Sheldon van der Linde and, as a result, has optimum chances of becoming “Rookie of the Year 2019.” Aberdein’s teammate, Pietro Fittipaldi, will enjoy prominent support at the finale: two-time Formula One World Champion Emerson Fittipaldi is going to keep his fingers crossed for his grandson at Hockenheim as a guest of Audi and WRT.

The two races at Hockenheim will start at 1.30 PM. German TV channel SAT.1 will begin airing live coverage on Saturday and Sunday at 1 PM (CEST). Tickets for the event are available online at www.audi.com/dtm. Spectators should not miss the opportunity to visit the Audi Thrill Zone at the venue. The hub in the DTM Fan Village offers virtual races, autograph sessions, interviews and plenty of other fan activities. In addition, the unveiling of the new Audi RS 4 is planned after the qualifying session on Saturday morning.