Crash landing for Audi and EKS in Sweden

{{ activeItem() }}
Twitter
03/08/21
Yasser Shahin &amp; Matthew Stoupas, in an @MelbPerformance-run Audi R8 LMS, finished 3rd in the 4-hr endurance race at… https://t.co/HI3sW9UzNu
03/05/21
.@abtmotorsport is returning to the @DTM in 2021 with two Audi R8 LMS entries. The driver line-up includes two Audi… https://t.co/NEgKa5fmQB
03/04/21
Wishing good luck to all of the Audi teams racing this week: 🇺🇸 @GT4America at @RaceSonoma 🇺🇸 @gt_america_ at… https://t.co/8Il0DLQdlH
03/02/21
Team Rosberg will run two Audi R8 LMS entries in the 2021 @DTM season. The team’s line-up includes Audi Sport drive… https://t.co/28Jii1M4dW
Audi Sport on Twitter
{{ activeItem() }}
Facebook
02/27/21
We are saddened to hear the news about the passing of Hannu Mikkola, a longtime friend of Audi Sport and the World Rally champion with Audi in 1983. We send our sincere condolences to his family and friends.
02/26/21
Strong pace for the Audi e-tron FE07 in Diriyah: Fourth place for René Rast and Lucas Di Grassi moved forward seven places to ninth. Both cars in the points and tomorrow we race again. >> audi.com/FormulaE #FutureIsAnAttitude #DiriyahEPrix
02/25/21
Audi Sport ABT Schaeffler in the 2021 ABB Formula E World Championship. First-ever Formula E night races coming up on Friday and Saturday at 20:03 local time (18:03 CET). Broadcast info >> fiaformulae.com/watch #FutureIsAnAttitude #DiriyahEPrix
02/24/21
Three E-Prix so far in Diriyah since 2018 with our highlight in 2019: Lucas Di Grassi on the podium with a runner-up finish. Aiming for more this week in the first two night races in ABB Formula E history, February 26–27. >> audi.com/FormulaE #FutureIsAnAttitude #DiriyahEPrix
Audi Sport on Facebook 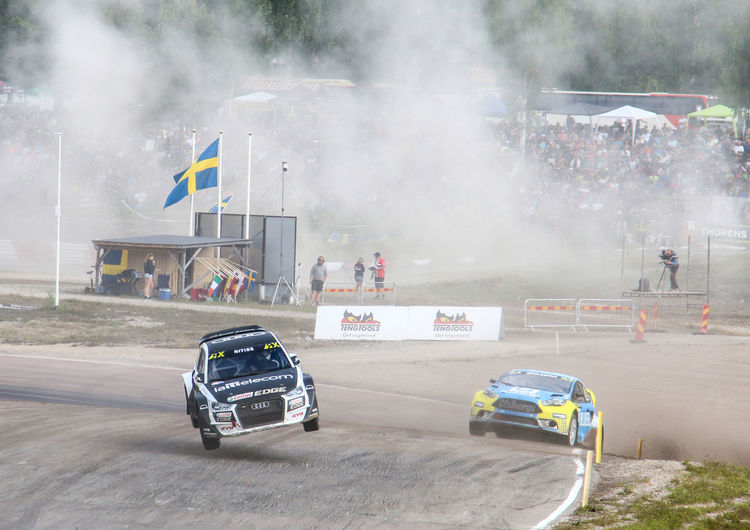 Round seven of the 2017 FIA World Rallycross Championship in Höljes was a weekend to forget for Audi and EKS. At EKS’ home round in Sweden of all events, all three drivers missed the semi-finals. Rallycross world champion Mattias Ekström, who was racing in the DTM at the Norisring this weekend, is ranked in position three of the overall standings with five races to go.

Audi and EKS had started the so-called “magic weekend” with great ambitions. Even without Ekström, the squad was intent on continuing the 2014 and 2015 successes when the local hero went home as the winner on both occasions. This year, however, even the qualifying sessions revealed that the necessary pace was lacking. On Saturday, Reinis Nitišs as the best EKS campaigner was ranked only in position twelve and, as a result, would have just barely qualified for the semi-finals of the twelve fastest drivers on Sunday. “Our lap times were more than half a second short of those of the front runners throughout the weekend,” Nitišs said, analyzing the event. Plus, on Sunday, there were some technical issues. In the final qualifying session, the suspension of the Latvian’s car broke, dashing all hopes of making it into the semi-finals.

Consequently, it was up to Toomas Heikkinen to finish the weekend that left something to be desired as the best-placed EKS driver. However, position 14 was anything but a perfect result. “It wasn’t a magic weekend from start to finish,” said the 2014 world championship runner-up. For Heikkinen, a victory in the third qualifying was followed by a setback in the last race when the Finn, after a collision with Timo Scheider and a subsequent spin, was only able to drag his damaged Audi S1 EKS RX quattro to the finish line. Ekström’s stand-in P-G Andersson in 17th overall complemented the worst result achieved by EKS since May 2015. The last time the entire squad had missed the semi-final rounds was at the Hockenheimring exactly 792 days ago.

Coming up next for Audi and EKS is the season’s first overseas race. On August 6 und 7, the World RX is going to visit Trois-Rivières between Montreal and Quebec City in Canada.