{{ activeItem() }}
Twitter
08/19/22
Take a first glimpse at the fourth member in Audi’s sphere family: The electric and autonomous #Audi activesphere c… https://t.co/30JZVpFXNm
08/19/22
What‘s the essence of #NewWork? If you had to choose: What is most important to you in the future world of work?… https://t.co/E999FhVxnb
08/19/22
#AudiOrigins – To Audi, the maxim “Vorsprung durch Technik” is not just limited to the road. Swipe through to see t… https://t.co/rpAulk9xGw
08/18/22
As we travel on screen, we’re allowed to dream. What is the craziest, most remote and highest destination that you… https://t.co/HHDFhmjQ5J
Audi on Twitter
YouTube
08/01/22 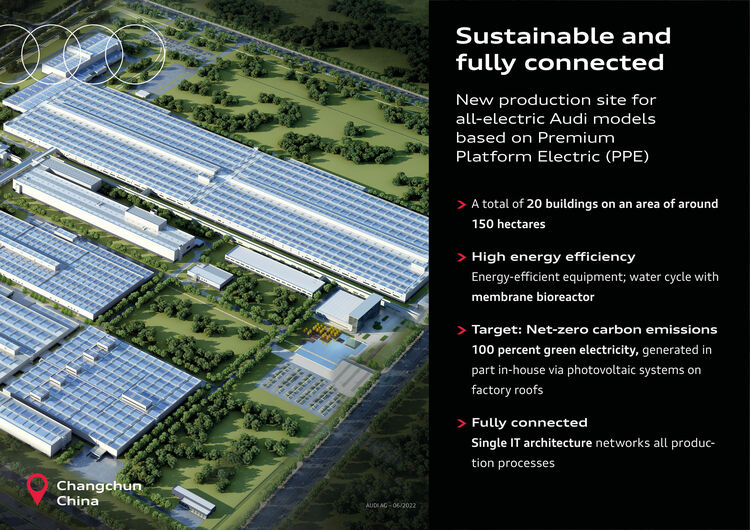 With the foundation of the Audi FAW NEV Company, Audi has set the course for made-in-China production of models based on the PPE (Premium Platform Electric) technology platform for the Chinese market. Work has now begun on the new production site in the northern Chinese metropolis of Changchun. With construction set to finish by the end of 2024, this will be the first automotive plant in China where only all-electric Audi models roll off the line. The factory is designed to produce more than 150,000 vehicles a year. All site processes will be networked, with Audi’s “Mission Zero” environmental program setting the guardrails for sustainable production.

“The start of construction on our new plant in Changchun is an important milestone for Audi in China. With the Audi FAW NEV Company, we are bringing the PPE platform to China and producing market-specific, all-electric models directly on site. This means the cooperation company will play a key role in the ongoing electrification of our model range for the Chinese market,” says Markus Duesmann, Chairman of the Board of Management of AUDI AG and responsible for the China business.

The new plant is being built on an area of around 150 hectares, which will make it slightly larger than the existing Audi plant in Neckarsulm once completed. A total of 20 buildings will be erected on the site by the end of 2022. The technical crews housed at the site will cover the entire value chain needed for automotive manufacturing. In addition to a press shop, body shop, paint shop, and vehicle assembly line, there will also be a battery assembly facility, where Audi will manufacture the high-voltage batteries used in its China-specific PPE models.

Audi chose the new location carefully: The German-Chinese cooperation company will benefit from the ideal infrastructure in Changchun. Changchun is one of the largest automotive regions in China. FAW (First Automobile Works), a long-standing Chinese partner of the company with the four rings, has its headquarters there. Audi has been producing models for the Chinese market in the FAW-Volkswagen plants since 1988. As a result, numerous supplier companies for the new plant are already located in the region.

With the new production site, Audi is also creating around 3,000 new jobs in Changchun. Once the plant is completed, production based on the PPE platform will begin, starting with three models from the Audi A6 e-tron and Audi Q6 e-tron series.

The new site will also serve as the headquarters of the Audi FAW NEV Company, which is responsible for production. The company is the first cooperation company with a majority interest held by Audi in China. Audi is investing around 2.6 billion euros in the overall project, which encompasses both the creation of the company and construction of the production plant.

“We are combining the best of two worlds. We are bringing together AUDI AG’s know-how from over a century of automotive history and the comprehensive expertise of our long-standing Chinese partner FAW in a new, ultramodern company with a production site,” emphasized Helmut Stettner, CEO of the Audi FAW NEV Company. This is also reflected in the numerous smart manufacturing technologies that the two partners are bringing together in the new factory, Stettner added.

The new Audi FAW NEV Company site boasts state-of-the-art technologies and solutions. In terms of factory layout and processes, the company is drawing on successful templates from other Audi sites and optimizing them to local conditions. All maintenance, logistics, and production processes are networked under one single IT architecture. And for the first-time outside Europe, Audi is using a fully integrated logistics solution based on SAP S/4HANA. Before the buildings are even standing, digital tools are already in use: 3D scanning is employed to recreate the entire construction site in great detail – another first for the Volkswagen Group. This step enables the planning staff in Ingolstadt to follow the progress of site work closely, despite the great distance, as well as to discuss the next steps with the experts on site.